The Palestinian Authority is accusing Israel of intentionally stifling the flow of travelers through a border crossing between the West Bank and Jordan to promote a new and expensive VIP service. 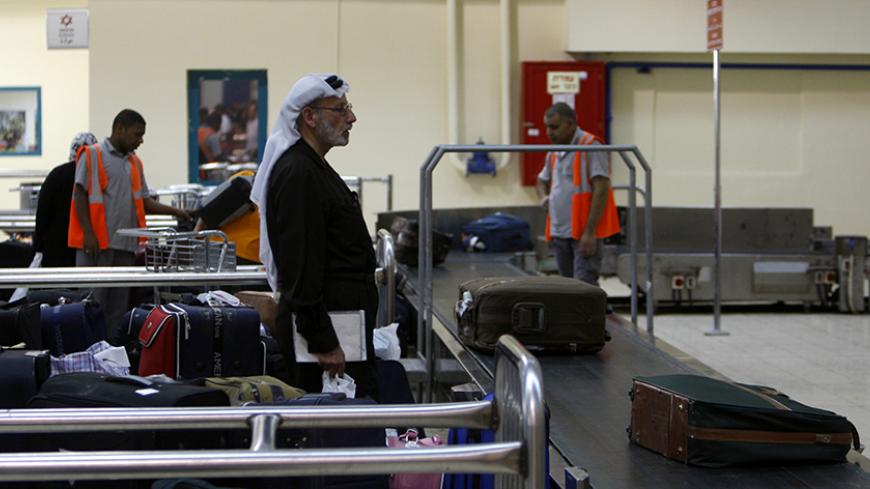 A traveler waits for his luggage at the Allenby Bridge border crossing, July 9, 2009. - REUTERS/Ammar Awad

RAMALLAH, West Bank — There was an unprecedented travel crisis at the King Hussein (Allenby) Bridge during the month of July, when the number of travelers coming to and from the West Bank reached 247,000, according to the Palestinian Authority’s General Administration of Crossings and Borders.

The high traffic on the border crossing between the West Bank and Jordan prompted Mohammed al-Hassan, 44, to take advantage of the VIP service at the crossing despite its exorbitant cost of $120-$150 per person. On July 24, Hassan was coming from the United Arab Emirates to the West Bank to spend his annual leave with his wife and three children.

Hassan, who works as an accountant in Dubai, told Al-Monitor, “I had to take the VIP service, which allows direct access from the King Hussein Bridge on the Jordanian side to the Karameh crossing center on the Palestinian side, despite its high cost, to avoid the wait and fatigue at the crossing, with the hot weather and overcrowding.”

The VIP service was planned to start during the first half of May, but was delayed for operational reasons. The service was the result of an agreement between the Palestinian Nejmeh taxi service in Jerusalem, an Israeli taxi company and the Jordanian Sahm taxi service in coordination with the Israel Port Authority. The PA has nothing to do with the service. The Palestinian side of the crossing is excluded from the service, a source at the General Administration of Crossings and Borders told Al-Monitor on condition of anonymity.

The source said that the VIP service is mostly for those coming from Jordan to the West Bank. Travelers who use the service are transported from the Jordanian side of the King Hussein Bridge to Karameh on the Palestinian side, through the Israeli border control station. Yet it is worth noting that travelers wishing to use the VIP service in the other direction cannot use it all the way from Karameh in Jericho, but only once they pass the Israeli checkpoint to cross to bridge to the Jordanian side, the source noted.

The source confirmed that in July, more than 15,000 travelers used this service to reach the West Bank, meaning that the service has already brought in nearly $1.8 million.

Some Palestinian politicians and citizens have accused Israel of intentionally causing the overcrowding at the crossing to force travelers to use the VIP service.

In an inspection visit to Karameh on July 21, Palestinian Prime Minister Rami Hamdallah accused Israel of full responsibility for the crisis at the crossing points, which include Karameh and the King Hussein Bridge, and for not keeping them open around the clock, despite the Jordanian side's involvement. He stressed that his government rejects the VIP service over its high cost and because the PA was not consulted.

The National Campaign for the Palestinians’ Freedom of Movement (Karama Campaign) claimed in a press conference at Karameh on July 21 that the overcrowding at the King Hussein Bridge and Karameh was a situation created by Israel to force people to use the VIP service.

Nazmi Muhanna, the director-general of the PA’s General Administration of Crossings and Borders, told Al-Monitor, “The VIP service involves private companies that operate in coordination with the Israel Port Authority. The PA is not a part of this service, and there is no political decision to be part of it.”

He said, “There are many reasons preventing the operation of this service at the Palestinian Karameh border crossing, including the lack of a political decision by the Cabinet and its high cost. This is why travelers arriving and departing are dealt with under the regular procedures.”

The VIP service allows travelers to save time and be more comfortable. The average travel time from the West Bank to Jordan, under normal circumstances, is about four hours, at an average cost of about $60. Each traveler has to pay a departure tax fee of 153 shekels ($40) divided between Israel and the PA, at Karameh on the Palestinian side, and a $1 fee for each bag. There is also a transportation fee of 23 shekels ($6) per person. Then the passport is stamped and the traveler is taken in a bus to the Israeli side, passing through security gates. Once the passenger arrives to the Israeli side, the passport is checked and the passenger is allowed to board another bus bound for the Jordanian side. After the passenger's passport is stamped and he pays an entry fee of $14 to Jordan, he is allowed to enter the country.

Youssef Mahmoud, a spokesperson for the Palestinian government, told Al-Monitor, “The government rejects the imposed Israeli measures on the movement of citizens at the crossings, including the VIP service. [The PA] has demanded that Israel halt this service or hold consultations over its details” to ensure the citizens’ freedom of movement at an acceptable cost and level of safety and comfort. Mahmoud said that the government demanded Israel keep the crossings open around the clock and review the service in consultations with the PA.

Jamal Shukair, the director of public ground transportation at the Palestinian Transport Ministry, told Al-Monitor that no company has obtained a license to join the service on the Palestinian side.

Shukair said, “The company operating as part of the VIP service, the Nejmeh taxi service, was licensed by the Israeli authorities, since it is based in Jerusalem, and the Palestinian government has no authority over this company.” He added that this service cannot begin operation at Karameh without a decision by the Palestinian Cabinet and an announcement of tenders in the newspapers.

The crisis at the border crossings has embarrassed the Palestinian government in the eyes of the public and has pressured the PA to find appropriate solutions. The crisis is expected to continue at the crossings until after the Eid al-Adha holiday on Sept. 11, the end of the summer holidays for students and summer vacation of visitors from the diaspora.