The new president and prime minister of the Iraqi Kurdistan Region have been sworn into office. 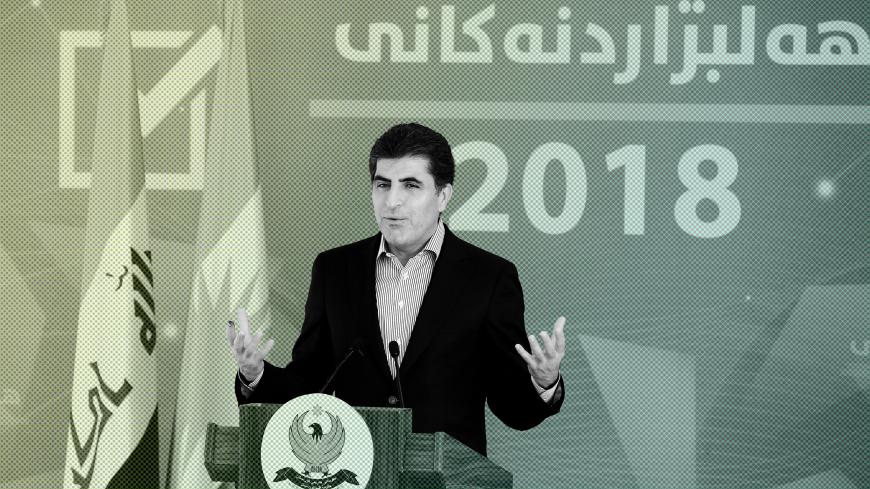 SULAIMANIYAH, Iraq — Iraqi Kurdistan has a new president and prime minister this week as the Barzanis continue to keep it all in the family.

After serving as the Kurdistan Regional Government's prime minister, Nechirvan Barzani was sworn in June 10 as the second president of Iraq’s semi-autonomous Kurdish region. He succeeds his uncle Masoud Barzani, who held the post for 12 years but stepped down in November 2017 after the region's independence referendum backfired, triggering a military offensive from Baghdad.

The KRG presidency is the most powerful position in the region. The post had been vacant in the months since Masoud Barzani stepped down, though he still heads the Kurdistan Democratic Party (KDP).

His son, Masrour Barzani — who is Nechirvan's cousin — was elected prime minister June 11, securing 87 votes from the 97 parliament members present out of 111. Some small opposition parties boycotted the session.

Nechirvan Barzani, who has been a member of the KDP's political bureau for 20 years, is expected to face many challenges during his four-year tenure, including internal Kurdish disagreements over the KRG's relations with Baghdad and the high tensions in the region as the result of the US-Iran dispute.

The issues he will face are the result of 27 years of KDP control over politics, which Nechirvan was part of," Massoud Abdul Khaliq, head of Standard Kurd Media, told Al-Monitor. "These issues include the region's chronic lack of public services, tension between the administrations of Erbil and Sulaimaniyah, the challenge of unifying the Kurdistan Region's peshmerga forces and a lack of rule of law."

He added, "The most important challenge Barzani will face is the KRG's oil dossier, which is a very dangerous one. If the oil dossier remains under the KRG's control, Iraq will not accept that. If the KRG hands over its oil to federal Iraq, Turkey and some international oil companies will not accept that, either. The KRG is indebted to oil companies. I don't believe Barzani can deal with all these issues, even if all parties help him."

The two main Kurdish parties, the KDP and its rival, the Patriotic Union of Kurdistan (PUK), fought a civil war from 1994 to 1998, leading the KRG to split into separate administrations. The KDP runs the show in the KRG capital of Erbil and the PUK holds sway Sulaimaniyah. Both parties have their own separate peshmerga (militia) and security forces, raising concerns about another civil war if there is major political discord.

The new president has the duty to unite the Kurdish peshmerga forces under one regular military force.

The Kurdistan region currently lacks a working constitution. The KDP is planning to pass a controversial draft constitution that would give even more power to the presidency, further curbing democracy and basic freedoms. Abdul Khaliq said "big reforms" are needed to enshrine democracy and basic freedoms in a new constitution but seemed skeptical that the president and the ruling parties will make such changes, arguing that the parties have "silenced" the parliament and that the KRG is a "corrupt" administration.

Monday’s controversial swearing-in ceremony was attended by senior Iraqi officials, a large number of foreign diplomats and guests. But some independent figures and opposition parties like New Generation refused to attend.

New Generation lawmaker Dyari Anwar told Al-Monitor, “Our problem is with the Kurdistan region’s vast authority.” He said that the ruling parties broke the law by extending the session into the next day so that the KRG PM nominee, Masrour Barzani, could be named prime minister.

Farman Hassan, a Kurdish journalist and lawyer working for Paiser Press, told Al-Monitor that lawmakers had no opportunity to speak at the session. Hassan theorized that the ceremony was so large because "the president wants to have a strong start to show his own political and diplomatic power, to reunite the opposing sides early in his presidential term."

The KRG president has broad authority as the high commander of the armed forces and the top executive authority. He also appoints members of the judiciary.

Hassan said Barzani will face the challenge of KRG oil contracts signed with Turkey, especially the 50-year oil deal that deeply concerns Baghdad. Hassan said Barzani wants to keep Ashti Hawrami on as the KRG's minister of natural resources to soothe Turkey and keep the oil dossier in his hands.

The region has been in a state of financial crisis since 2014, when oil prices fell to record lows, and because of the four-year war against IS. According to some estimates, until 2018, the KRG's debts exceeded $20 billion. The KRG still lags three months behind on salaries to its civil servants. The area suffers high unemployment rates.

Other key challenges that will complicate Nechirvan Barzani's term include the decades-long territory disputes between Erbil and Baghdad and balancing bilateral relations with Washington and Tehran.