Following an attack in Tripoli that killed four, the Lebanese government admits that it might not prepared to confront "lone wolf" terrorism. 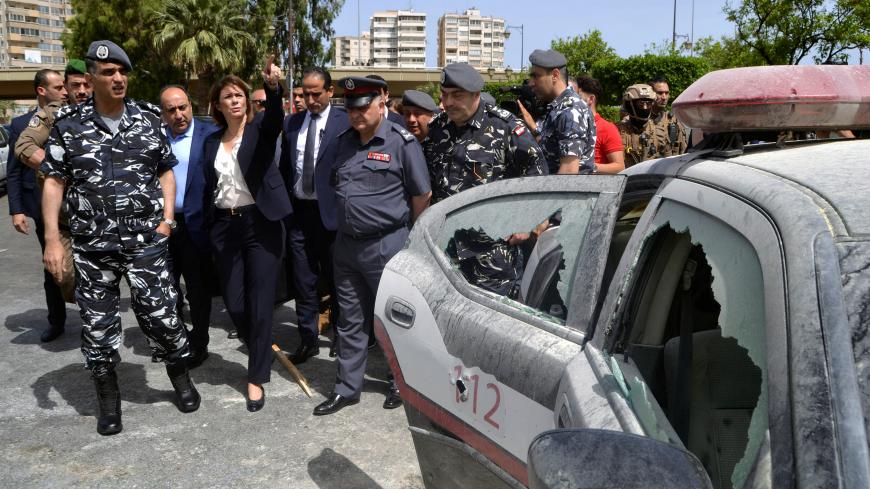 TRIPOLI, Lebanon — Scenes of chaos and panic unfolded in the northern Lebanese city of Tripoli the night of June 3. An attacker shot at army soldiers and members of the Internal Security Forces (ISF) and threw an explosive into a government building. The attacks killed four and wounded many more.

The attacker, identified by authorities as Abdel Rahman Mabsout, had reportedly served a year in Lebanese prison between 2016 and 2017 after fighting with the Islamic State (IS) in Syria. No group has claimed responsibility for the Tripoli attack.

The attack took place on the first night of Eid al-Fitr, the holiday marking the end of Ramadan. Locals told Al-Monitor they struggled to find safety during the attack. In an audio recording sent to Al-Monitor, an audibly traumatized woman described witnessing the killing of a security officer in his vehicle. The attacker targeted three separate locations in the city before holing up in an abandoned building. He allegedly chanted religious slogans before killing himself with an explosive belt.

Tripoli residents remain visibly shaken by the attack. The city has been the target of violence by armed and outside groups in the past, but Interior Minister Raya al-Hassan said that this attack was committed by an individual acting alone.

The Tripoli attack, according to analysts, is emblematic of a new wave of terrorism: Now that groups like IS have pivoted from top-down operations, they are focusing on so-called lone wolf attacks. Although Lebanon has effectively foiled terror plots in recent years, authorities say they are unsure whether Lebanon's security forces can counter this new threat.

The impact of the attack reverberated throughout Tripoli on June 4, as armored ISF vehicles and military jeeps moved through the relatively quiet streets. A private security officer at a Tripoli mall told Al-Monitor that compared to previous Eid al-Fitr holidays, Tripoli felt much emptier this year. Many people did not celebrate and chose to stay home out of fear.

Police officer Ahmad Shbib, who had reported to one of the attack scenes, said that after years of peace, the event had caught people off-guard.

“Yesterday was a shock, a surprise,” Shbib said. “The last time IS worked in Lebanon was four years ago, when, for the last time, there were explosions, and we forgot there was something called IS here in Lebanon.”

Many shops in Tripoli remained closed throughout the day and the night. Ahmad Matraji, a Tripoli resident, said that this had affected businesses' sales. He added that security fears would likely impact Tripoli’s economy in the short term.

Rumors circulated among residents that there could be additional attackers and threats. ISF chief Maj. Gen. Imad Osman and Interior Minister Hassan told reporters that Mabsout was the only attacker, and that this new brand of terrorism might be difficult to tackle.

“Can I tell you we can curb it 100%? We can't curb it," Hassan said. "Countries that are perhaps more advanced than us have not been able to.” The ISF declined to comment for this story.

Authorities arrested several members of Mabsout’s family in Tripoli on June 4 for unknown reasons. The arrests suggest a crackdown — or at least the appearance of one — is taking place.

Hassan Hassan, co-author of "ISIS: Inside the Army of Terror," agreed that the Tripoli attack is part of a trend.

“This attack, along with recent attacks such as the ones in Sri Lanka and in Congo, show that IS could still attack but even in places where it didn’t necessarily attack before,” Hassan, the director of the non-state actors program at the Center for Global Policy, told Al-Monitor. “This shows that it’s very hard to pinpoint where this threat is and where it’s going to be in the next few years.”

Like IS-affiliated lone wolf attackers elsewhere, Mabsout was young and seemingly alienated from his family and community. Omran Musa, a resident of the Bab al-Ramel neighborhood, where Mabsout lived, described Mabsout to Al-Monitor as “a very regular guy who we knew but were not close to.” Musa added that Mabsout’s family had disowned him on the same day he carried out the attack, citing this as a possible motivation.

Lebanese President Michel Aoun said the attack may have been an act of revenge against security forces. Aoun led a meeting of security officials on June 4, during which he called for tighter security measures, the monitoring of terror suspects and improving intelligence-sharing efforts between agencies.

Yet it remains unclear why Mabsout was released from prison after only a year and allowed to move freely. Defense Minister Elias Bou Saab ordered an investigation into the circumstances of Mabsout’s arrest and prison sentence. Speaking to Al-Monitor, Tripoli City Council member Bassel el-Hajj asked how Mabsout was able to carry out multiple attacks in the city before being confronted by security forces, since the area is covered in surveillance cameras.

Misbah Ahdab, a former member of parliament from Tripoli, stated that structural problems will continue to encourage terrorism in Lebanon if they are left unaddressed. He blamed political forces in Lebanon for funding militant groups and distributing weapons in Tripoli, which played a role in fueling the sectarian conflict that raged in the city until 2015. He stated that similar structures had encouraged Lebanese militants like Mabsout to fight in Syria, and many of them are likely to return soon as the conflict winds down.

While stressing the need to separate extremists from the broader Sunni community in Lebanon, Ahdab called for more robust sentences for convicted terrorists and stronger tracking of former terror detainees. Sentencing, however, is only a part of the problem, and Roumieh prison, where Mabsout was held, especially its notorious Bloc B, has reportedly been a hotbed of extremism for years.

In a Facebook post, Hajj called on leaders to “rehabilitate [prisoners] and compensate the damage intended by the state against them and shelter them with work … otherwise, the story in Tripoli will be repeated by the thousands.”

While the EU, UN and Lebanese ministries launched an initiative in 2018 to rehabilitate extremists in the Lebanese prison system, it remains unclear how long it will take for such efforts to produce results.

In the meantime, the appearance of lone wolf terrorism in Lebanon will continue to present unique challenges in the country, where the availability of weapons, the inflow of Lebanese returnees from Syria, criminal justice failures and other systemic problems make containing future attacks more difficult than in other countries. Until changes are made, Tripoli residents and the rest of Lebanon will be forced to reckon with the consequences.