On the backdrop of tensions in Gaza, the decision of Prime Minister Benjamin Netanyahu to include Knesset member Bezalel Smotrich in the Security Cabinet could turn into a disaster. 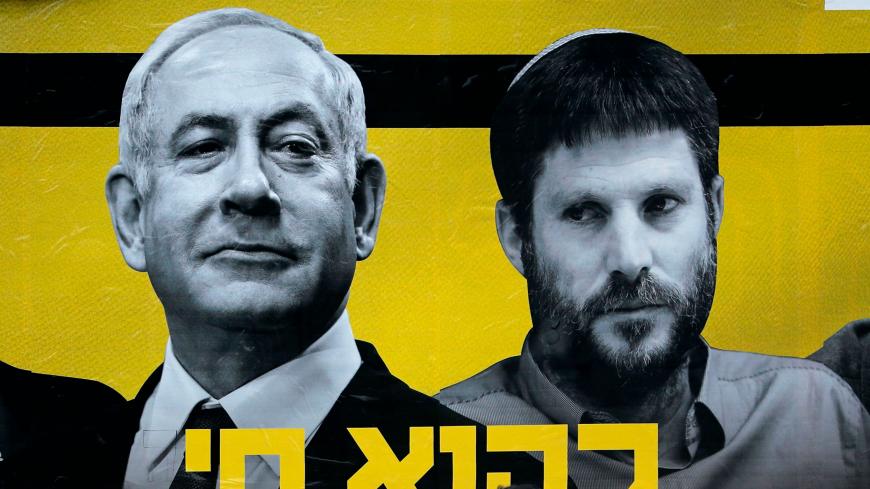 On June 17, Prime Minister Benjamin Netanyahu appointed Bezalel Smotrich of the United Right alliance as minister of transportation and a member of the Security Cabinet, the inner government forum tasked with defense and diplomacy policies. The newly named minister of education, United Right Chair Rabbi Rafi Peretz, was also named to the Cabinet, albeit as a nonvoting observer.

Unlike Peretz, who served in the past as a career officer and fighter pilot, Smotrich evaded full military service. He enlisted at the age of 28 for 18 months under an arrangement for yeshiva students after graduating law school. Most Israelis are obliged to go into the army at the age of 18 for three years. A month after his enlistment, he took time off to run for the 18th Knesset in 2009, completing his service after failing to be elected.

Prior to Israel’s 2005 withdrawal from the Gaza Strip, Smotrich and four other young Israelis were detained by the Shin Bet security service for three weeks on suspicion of planning to block major roads to hamper the pullout. He was not indicted. Former Prime Minister Ehud Barak published a photo of Smotrich in prison uniform this week, tweeting: “An abomination. The pet of the [racist] Kahane supporters, the man who initiated the [anti-gay 2006] 'March of the Behemoths' in the Cabinet?! He will send our children to war?! Netanyahu has lost it. Totally.”

Chair of the left-wing Meretz Party, Knesset member Tamar Zandberg, reacted cynically to the appointment. “Wait a minute. Smotrich in the Cabinet means going to unnecessary wars, but not on the Sabbath?” Netanyahu, she added, put a “messianic war-monger into the State of Israel’s Cabinet.”

Knesset member Yair Lapid, co-chair of the centrist Blue and White party, also hit out at the appointment, citing Smotrich’s recent advocacy for instituting the laws of the Torah as in the days of King David. “I wonder how the Security Cabinet worked in the days of King David and King Solomon,” Lapid tweeted, adding, “Putting Smotrich in the driver’s seat means Netanyahu no longer differentiates between the good of the state and his own personal benefit.”

Smotrich did not hold back, answering Lapid: “One thing is certain regarding David and Solomon. They knew what it meant to win, to kill their enemies without blinking and to create deterrence.” He then cited a quote from the Book of Psalms attributed to King David (18:38), “I pursued my enemies and overtook them; I did not turn back till they were destroyed.” This clearly reflects the views of the Cabinet freshman, who will certainly wish to make his mark on the forum.

Much has been written, including on Al-Monitor, about Smotrich urging Netanyahu to pummel Gaza in response to Hamas attacks on Israel, to bomb high-rises there, to recapture the enclave and destroy Hamas. In a March 29 interview with Ynet, Smotrich laid out his plans for Gaza. “I reconquer Gaza, disarm all the forces there, open its gates to mass emigration — and this could certainly be part of a far broader approach in cooperation with other countries and with Europe, saying, ‘Dear friends, there never was and never will be a national Arab entity in the Land of Israel between the Mediterranean and the Jordan River. Period.'”

In a June 2019 interview with the pro-government Israel Hayom paper, Smotrich demanded that Israel stop sending humanitarian aid to Gaza, including medicine. “As far as I’m concerned, Gaza can be sealed off hermetically. There is no need to send them anything. Let them die of hunger, thirst, malaria. I don’t care. They are not my citizens; I don’t owe them a thing.”

This week, with his appointment as a government minister and Cabinet member, Smotrich made clear that his solution for the Gaza problem is an Israeli return to the Katif settlement bloc, the group of settlements north of Gaza that it evacuated in 2005 despite his attempts to block roads to prevent it.

Most of the condemnations of his Cabinet appointment naturally focused on Smotrich’s inveterate militancy. The Cabinet, which usually numbers 11 members, makes decisions about military operations and weighty diplomatic issues. Members of this inner sanctum are privy to secret and sensitive information on which top defense officials brief them. Is Smotrich suited for such a sensitive post? Might he not manipulate the information he is given?

Smotrich, with his well-defined views that he makes no bones about, enters the Cabinet at a sensitive time for Israel’s security. For example, Netanyahu must make a decision regarding the drawn-out negotiations over a long-term cease-fire deal with Hamas, delayed by the April elections and leading to further rounds of Israel-Gaza violence in recent months. This, despite Egyptian urging that Hamas bide its time if it wants a deal that will alleviate the suffering of Gaza’s residents and ensure its continued rule of the enclave. Despite the continued launching of incendiary balloons into Israel and the consistent criticism of his policy, Netanyahu has approved the easing of some restrictions on Gaza, allowing in food and medicine, expanding its fishing zone and letting Qatar provide cash aid to Gaza.

No one imagined that Israel would be entering yet another election campaign just weeks after the April elections of the 21st Knesset, which means that at least until November, an interim caretaker government will run Israel. That also means that the Security Cabinet of which Smotrich is now a member will serve for at least five or six more months until a new government is formed — an eternity when it comes to the beleaguered Gaza Strip. Gaza and its Hamas rulers will not wait for Netanyahu, and given the current Cabinet makeup — the most radical in Israeli history — chances of Cabinet approval for a deal with Hamas are slim.

While Netanyahu has made important decisions without convening the Cabinet, a deal with Hamas would require its members’ approval. Some would argue that former Education Minister Naftali Bennett also vehemently opposed an arrangement with Hamas and also urged Netanyahu to flex his muscles against it, but Smotrich and Peretz (with the latter only an observer) will not ease up on Netanyahu. Clearly, these two won’t enable him to reach a deal with Hamas, certainly not at the height of an election campaign when all sides invariably adopt positions that are more radical.

Realistically speaking, the Security Cabinet will not make any decisions in the coming months on an arrangement with Hamas. Rather, its members might demand a debate on deploying Israeli troops in Gaza, reconquering the enclave and perhaps even rebuilding the Katif settlement bloc.