Amid continued frustration with the European signatories to the nuclear deal, Iran is sending fresh signals about its potential departure from the pact, while indicating that diplomacy remains a viable option. 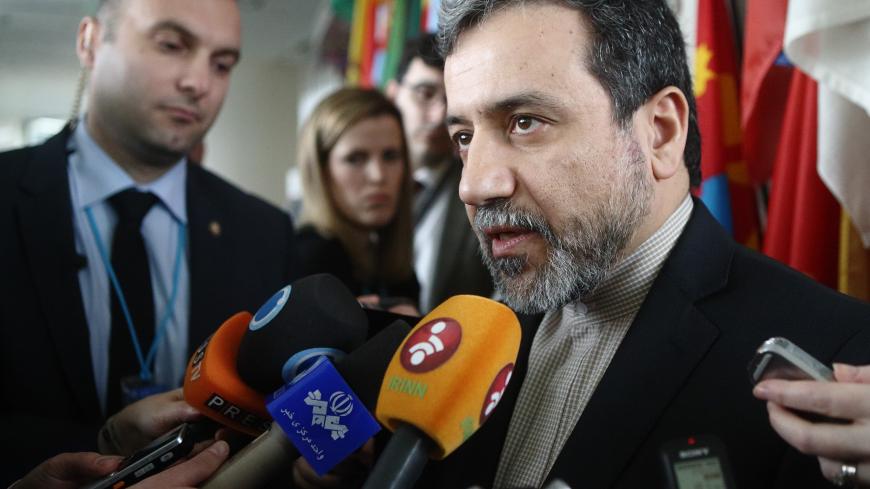 Iran's Deputy Foreign Minister Abbas Araghchi says his country's plan to scale back on the commitments it pledged under the Joint Comprehensive Plan of Action (JCPOA) is a "phased" process that leaves the window to diplomacy open. Yet Araghchi, who was also a senior negotiator in the marathon nuclear talks culminating in the landmark accord in 2015, hit out once more at Europeans for their delays in fulfilling their obligations.

"Unfortunately, the proportion between Iran's commitments with its rights under the deal has been shattered … which is why Tehran finds no reason to continue a unilateral fulfillment of obligations," he told the visiting state secretary of the Slovakian Ministry of Foreign and European Affairs in Tehran — a city that has witnessed a recent diplomatic frenzy involving European representatives tasked with last-ditch efforts to salvage the deal.

The gradual process underscored by Araghchi is a series of measures Iran revealed May 8 on the first anniversary of the US withdrawal from the JCPOA. The announcement also marked the end of one full year of what Iran called "strategic patience" with the European signatories, accused of failing to provide Tehran with the accord's promised economic dividends.

Iran gave the Europeans 60 days to take practical steps toward saving the agreement, a deadline that is set to expire July 8. In a harsh reminder about the countdown June 25, Secretary of Iran's Supreme National Security Council Ali Shamkhani unleashed a ferocious attack on the Europeans for mistaking Iran's "patience with weakness and inaction." Shamkhani stressed that the Islamic Republic will not hesitate to implement its measures in the "second step," which involves a resumption of uranium enrichment up to 20%, far above the 3.67% cap placed by the JCPOA. In the first phase, Iran declared that its low-enriched stockpile will have exceeded the 300-kilogram limit by June 27.

Araghchi's suggestion about chances of diplomacy with the Europeans came after the US government slapped several Iranian officials, including Supreme Leader Ayatollah Ali Khamenei, with unprecedented sanctions. The move has been interpreted by many as an end to a potential diplomatic resolution of recently heightened tensions between the two sides.

The commander of Iran's Islamic Revolutionary Guard Corps, Hossein Salami, downplayed the new sanctions as "ineffective and void of any logic." The major general noted that the US decision was an angry outburst against last week's downing by soldiers under his command of a US drone near the Strait of Hormuz. Echoing a similar stance, Javan, a newspaper affiliated with Salami's military organization, wrote that Trump had "blown the fuse" by banning the Iranians following the drone incident.

"Diplomacy sanctioned," read the headline on Ebtekar, which largely represents Iran's pro-engagement Reform movement. The paper printed a picture of Iran's Foreign Minister Mohammad Javad Zarif busy thinking in a chess game with US President Donald Trump, while the latter is in boxing gloves. Elsewhere, Mardomsalari, with the same pro-Reform agenda, declared an end to "Trumpian diplomacy." According to the paper, with the new anti-Iran sanctions, "The White House proved zero sincerity in its offer for direct dialog with Tehran."

With the current tensions increasingly signaling risks of a military standoff, there are calls on Iran to carefully watch its steps on the fine line. "Trump is seeking to portray Iran as a warmonger state that skips negotiations," said Tehran-based political scientist Sadegh Zibakalam. "Therefore, it is highly essential for the Islamic Republic not to fall [into] that trap," Zibakalam told Arman daily.