Tehran has freed Nizar Zakka, a Lebanese national and American resident, who was serving a 10-year jail term in Iran for espionage, but there is no clear indication of a wider prisoner swap deal with the US government. 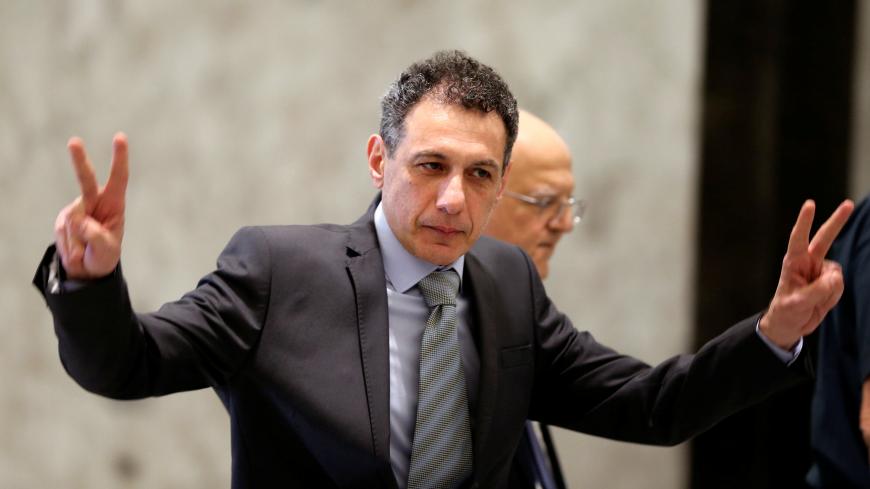 Freed Lebanese businessman Nizar Zakka, who had been detained in Iran since 2015, gestures as he arrives at the presidential palace in Baabda, Lebanon, June 11, 2019. - REUTERS/Mohamed Azakir

Lebanese national and US green card holder Nizar Zakka arrived in Tehran upon invitation from Iran's Vice Presidency for Women and Family Affairs to attend an entrepreneurship conference in 2015. The information technology expert and businessman was arrested by the Islamic Revolutionary Guard Corps on accusations of "collaborating with the United States government." Nearly a year later, he was found guilty of espionage and handed a 10-year jail term.

Recent speculation about his impending release ultimately proved true and Iran's judiciary ordered Zakka to be "conditionally released" June 11. Under Iran's penal code, a conditional release may be granted after the convict has served a third of a jail term of 10 years or less and is found by the judge to have demonstrated "good demeanor" during imprisonment.

According to a judiciary spokesman, the release had been requested by Zakka and the Lebanese president. Earlier, there were reports that President Michel Aoun had received promises from his Iranian counterpart Hassan Rouhani to secure Zakka's freedom. Aoun told the Lebanese press that he had tasked Lebanon’s top security official, Abbas Ibrahim, with following up on the request. Ibrahim's office in Beirut posted a photo dated June 10, saying the release process was near completion. A day later, the security official was shown alongside Zakka on board a Lebanon-bound plane.

The news contradicted reports by some Iranian sources that claimed Zakka would only be handed over to Hezbollah officials. Iran's state media had been quoting "an informed source" within the judiciary as saying that the release had been secured via mediation by Hezbollah leader Hassan Nasrallah, news that was later contradicted by other outlets.

Iranian officials insisted that the process was entirely a judicial one and that the ruling had nothing whatsoever to do with political considerations. They also refrained from describing Zakka as an American resident. Nevertheless, hard-line media outlets including Kayhan referred to him as "the American-Lebanese spy."

It is still hard to tell if any Iranian nationals incarcerated in the United States are to be exchanged with Zakka. But in late April, Foreign Minister Mohammad Javad Zarif expressed his country's willingness for such swaps. Addressing a UN meeting at the Asia Society in New York, Zarif asserted that he had been granted the authority to negotiate such deals. The comment marked a sharp departure by the US-educated diplomat, who in similar cases had repeatedly adhered to the official line that prisoners are exclusively handled by Iran's judiciary, which acts "independently" from the administration.

"The US has seemingly agreed to Zarif's offer, but only if the Americans are the ones who are released, and that sanctions intensify on a daily basis. So the deal has now started with Zakka's freedom and the ban on the petrochemical industry," tweeted an Iranian user in sarcastic criticism of Zarif's perceived overtures to the US administration.

Still, Zakka's release might already have brought hope to several others including Iranian-American businessman Siamak Namazi and his father Baquer, Princeton scholar Xiyue Wang and US Navy veteran Michael White, not to mention former FBI agent Robert Levinson, who went missing on Iran's Kish Island in 2007.

Critics accuse Iran's political establishment of holding foreign nationals — not just Americans — for use as bargaining chips and pressure tools to pursue a certain political agenda, a charge that Iran categorically dismisses.