In three speeches in less than 24 hours, Iran's supreme leader launched fresh attacks against the Trump administration, slamming its "deal of the century" for the Middle East conflict and dismissing Washington’s latest outreach to Tehran as a "ploy." 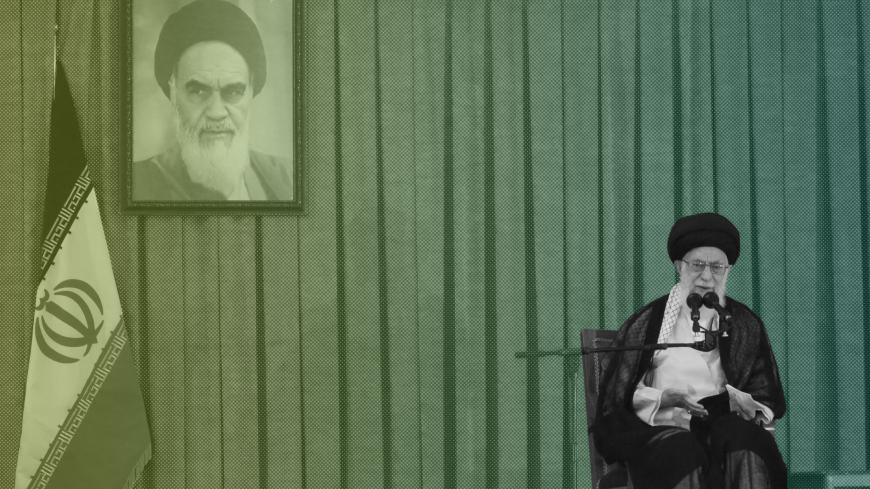 Iran's Supreme Leader Ayatollah Ali Khamenei says the US-devised roadmap for the Middle East conflict known as the "deal of the century" will lead nowhere, slamming Saudi Arabia and Bahrain as ground makers of "such an evil plot."

Khamenei made the comments as part of his Eid al-Fitr sermon delivered to worshippers in the capital city of Tehran. He said the deal will never succeed, and he expressed gratitude toward Arab countries and Palestinian factions for standing up to it. The Iranian leader also touched upon a planned economic conference in Bahrain set to be focused on the same deal. He advised Bahraini and Saudi officials to beware that they were stepping in a "quagmire" by pushing for the US plan and asserted that the Saudis still had a chance to "repent" and "correct" their approach.

A few hours later, Khamenei told ambassadors of Muslim countries in Tehran that Palestine was the most pressing issue of the Islamic world and Palestinians will be the ultimate winners of the battle against Israel. The two speeches came less than a day after the supreme leader attacked some Arab leaders for "betraying" the Palestinian cause and serving as "followers" of the United States.

In that address, which marked the 30th anniversary of the death of Ayatollah Ruhollah Khomeini — the founder of the Islamic Republic — Khamenei once again ruled out negotiations with the United States. He was reacting to an apparent shift of tone by US President Donald Trump, who insisted that Washington was not seeking to topple the regime in Tehran. "This is a political ploy … which Iranian officials and people will not be duped into," Khamenei said. He warned the United States to stay away from Iran because "wherever [the United States] stepped in, they brought along wars, fratricide or sedition. …"

The recent friction between Iran and the United States has seen ratcheted-up rhetoric coupled with US military reinforcements in the Persian Gulf in anticipation of a military confrontation. The tense situation, however, has not diminished chances of mediation. While in Tokyo in late May, Trump reportedly nodded to a Japanese offer to play a role in patching up things between Tehran and Washington.

The Iranian government is now finalizing preparations to host Japan's Prime Minister Shinzo Abe next week. In an interview with Japan's NHK Television, Deputy Foreign Minister Abbas Araghchi expressed hope that Abe's trip will defuse tensions in the region. In a more apparent reference that the Japanese leader will be there for mediation, Araghchi asserted that Abe could help the Americans understand "the current situation." During the visit, Abe is expected to sit down with Khamenei — the man who constitutionally has the final say in critical foreign policy decisions, among them rapprochement with arch-foe United States.

Iranian conservatives, who have traditionally considered it a red line to hold talks with American administrations, are already downplaying the visit. "The US talks with North Korea have hit a dead end. Its pushes to resolve tensions with China have failed … and its 'deal of the century' is out until further notice. Despite all that, a former Iranian diplomat has called Abe's visit an opportunity for Iran," tweeted an Iranian in criticism of those who are capitalizing on mediation.

In 1983, when Iran was heavily engaged in a deadly armed conflict with neighboring Iraq, Abe's father, Shintaro, paid a similar visit to Tehran as Japan's foreign minister to try to mediate an end to the bloodshed. The then 27-year-old diplomat, Shinzo, accompanied his father during the trip.

Activists representing the pro-Reform camp, who are loathed by rival hard-liners over their push for engagement with the West, are already recirculating videos online of that very visit, as they are pinning hopes on a possible successful Japanese mediation that could keep the shadow of war away from Iran — at least for some time.