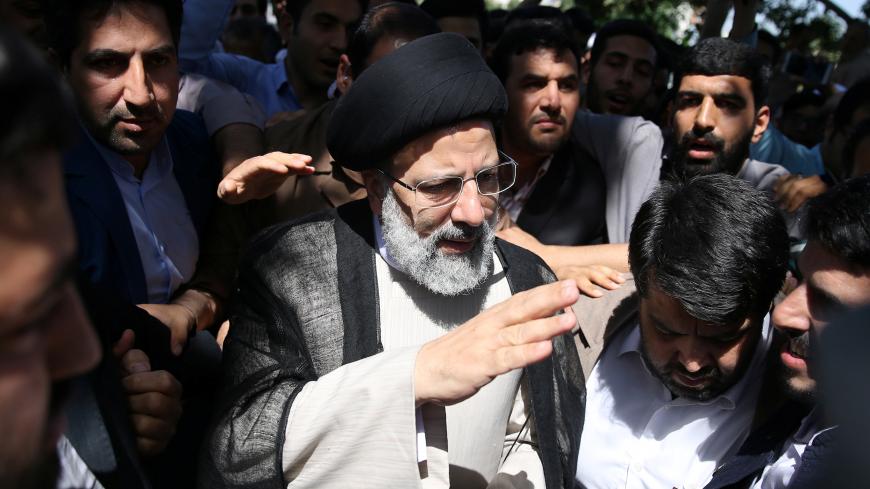 Iranian presidential candidate Ebrahim Raisi (C) arrives with crowds of supporters to cast his vote during the presidential election in Tehran, Iran, May 19, 2017. - TIMA via REUTERS

The Iranian judiciary has dismissed 60 judges since early May in an anti-corruption drive launched by Ebrahim Raisi, the recently appointed conservative chief justice. During a presser in Tehran, Raisi's first deputy, Gholam-Hossein Ejei, announced that the sacked judges came from a wide range of ranks in the judiciary. An unspecified number of those fired have also been barred from any future appointment in the wider public service. According to Ejei, the clampdown was part of an "intensified" campaign against "law-breaking judges."

The in-house cleanup started immediately after the new judiciary chief was sworn in March 3, following his appointment by Iran's Supreme Leader Ayatollah Ali Khamenei, whose decision won applause not only from Raisi's fellow conservatives, but also from a vast section of Iran's Reform movement, including outspoken parliamentarian Mahmoud Sadeghi. A lawyer himself, Sadeghi is known for his ferocious attacks on nepotism and injustice in the judicial system. To him and many others, Raisi's advent revived hopes about an overhaul in a system grappling with deep-rooted fraud.

The Iranian judiciary, which directly reports to the supreme leader, has also faced widespread criticism over unaccountability, cumbersome paperwork, lengthy proceedings and a merciless clampdown on political dissent. Most recently, in a move rarely made by his predecessors, the new chief justice addressed the horrifying murder of political prisoner Alireza Shir Mohammad Ali at a notorious jail south of Tehran.

The 21-year-old social media activist was serving an eight-year sentence over posts deemed insulting to Iran's supreme leader. Last week, he was stabbed over 30 times by two prisoners in jail for manslaughter. The victim was said to have urged prison authorities to observe the law on segregating prisoners based on their charges, a call that went unheeded. The death enraged human rights activists, who blamed the judicial system for intentionally keeping political prisoners close to those with criminal backgrounds. As the outcry intensified, Raisi ordered a probe, assigning two separate teams to investigate "possible negligence" that might have led to the political prisoner's death.

In yet another important decision, Raisi has ordered the implementation of the dormant Article 49 of the Iranian Constitution, which demands strict transparency regarding the financial status of senior officials. If fully carried out, the order is expected to raise the curtain on numerous cases of illegal accumulation of wealth.

Still, given Raisi's past record in the judiciary, many doubt the sincerity of these recent measures. The hard-line cleric has never been at ease when facing criticism for his involvement in issuing mass execution verdicts against political detainees across Iranian prisons in the 1980s. President Hassan Rouhani even brought up the case during the 2017 presidential election. Rouhani used the accusations as a launchpad for his harshest attacks on the hard-line cleric, whom he ultimately defeated in the polls, a win Iran's Reformists largely claim credit for.

"We won’t forget how the Reformists launched their campaign of demonization against Raisi. Now, they are appealing to him, praising his 'honesty' and 'humane' character," tweeted an Iranian user in light of the Reformists' apparent tilt in favor of a cleric they once sought to discredit.