Intel: Where candidates came down on Iran in Democratic debates 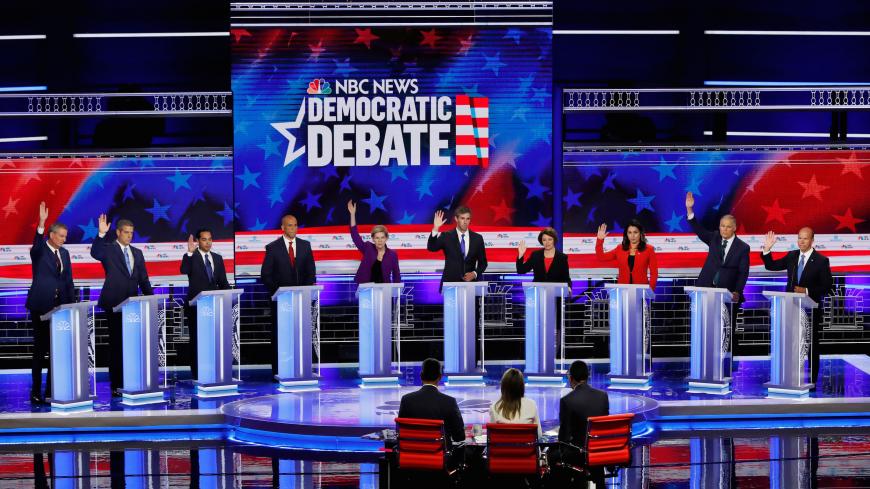 All candidates except Sen. Cory Booker raise their hands while responding to a question of whether they would support the original Iran nuclear agreement during the first US 2020 presidential election's Democratic candidates debate in Miami, Florida, US, June 26, 2019. - REUTERS/Mike Segar

While Iran featured less prominently on the second night of debates, moderators asked candidates in the first round whether they would reenter the Iran nuclear deal “as it was originally negotiated.”

Every candidate on stage except for Sen. Cory Booker, D-N.J., responded yes even as they continued to criticize parts of President Barack Obama’s accord.

But Booker’s willingness to break from the pack reflects a broader debate among Democratic-aligned foreign policy analysts about unconditional reentry into the nuclear deal, which President Donald Trump pulled out of last year as part of his “maximum pressure” campaign against Iran.

“We need to renegotiate and get back into a deal, but I’m not going to have a primary platform to say unilaterally I’m going to rejoin the deal because when I am president of the United States I’m going to do the best I can to secure this country and that region to make sure that if I have the opportunity to leverage a better deal, I’m going to do it,” said Booker.

While Booker ultimately voted for the deal in 2015 — alienating many of his pro-Israel allies — and opposed Trump’s subsequent withdrawal, his argument mirrors that of some former Obama administration officials. Richard Nephew, Obama’s former sanctions coordinator, and Robert Einhorn, his former adviser for nonproliferation and arms control, have argued for a renegotiated nuclear agreement because several key restrictions in the deal expire shortly after 2020. While the conventional arms embargo on Tehran expires in 2021, Iran holds presidential elections that same year, politically tying President Hassan Rouhani’s hands even if he were inclined to strike a new deal following Trump’s pressure campaign.

Democrats still tepid:  Despite their stated support for unconditional reentry, several Democrats maintained their Obama-era talking points, taking aim at the deal’s perceived flaws. Anti-war candidate Rep. Tulsi Gabbard, D-Hawaii, called it “an imperfect deal” and vowed to tackle Iran’s ballistic missile program even as she lambasted Trump’s “chickenhawk cabinet” for bringing the United States “to the brink of war with Iran.”

Despite indicating support for unconditional reentry, Sen. Amy Klobuchar, D-Minn., who has said she would negotiate the United States back into the deal, criticized the sunset provisions, calling it “something we could negotiate to get back in the deal.” She also argued that Trump is “10 minutes away from going to war,” citing Iran as the greatest geopolitical threat.

What’s next?  The moderators did not ask the same question of the second batch of candidates on Thursday, so it remains to be seen where other candidates come down on reentering the nuclear deal. Former Colorado Governor John Hickenlooper also supports stricter conditions to reenter the nuclear deal. Former Vice President Joe Biden has yet to weigh in on whether he would place conditions on reentry.

And while Sen. Kirsten Gillibrand, D-N.Y., has yet to take a position on reentering the accord, she cited Iran as the first country she would try to reset relations with to “make sure we do not start an unwanted, never-ending war.”