Advocacy groups are pushing to rejoin US allies in the JCPOA amid criticism of Trump’s foreign policy record. 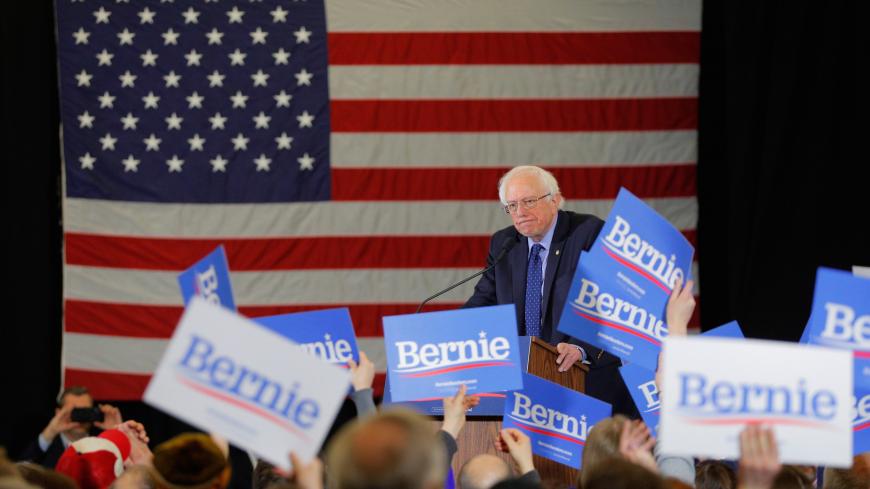 Independent Vermont Sen. Bernie Sanders, who is a candidate for the Democratic presidential nomination, speaks at a campaign rally in Concord, New Hampshire, March 10, 2019. - REUTERS/Brian Snyder

Re-entry into the nuclear deal with Iran is fast becoming a litmus test for Democrats hoping to challenge President Donald Trump in 2020.

No fewer than five declared candidates have told Al-Monitor over the past few weeks that they would rejoin the deal without preconditions should they win the presidency — as long as Iran continues to live up to its end of the 2015 pact. These include well-known lawmakers such as Sens. Bernie Sanders, I-Vt. and Elizabeth Warren, D-Mass., who both voted for the deal in 2015, along with Sen. Kamala Harris, D-Calif., who was elected in 2016.

The trend comes as pro-deal advocacy groups are ramping up their outreach to Democrats ahead of the first primary debate in June. Al-Monitor has learned that National Security Action, a group of former Barack Obama administration officials, has circulated a draft memo to all declared Democratic candidates asking them to rejoin the Joint Comprehensive Plan of Action, or JCPOA.

“While we won’t speak to private conversations, the message we have been sending is clear and simple,” said Ned Price, the group’s policy director. “If Iran remains in compliance, the next administration should rejoin the Iran deal and use principled diplomacy to negotiate a follow-on agreement to keep the Iranian nuclear program in a box for the long term.”

That argument is gaining traction in the crowded Democratic field.

Harris “would rejoin the Iran deal if the US could verify Iran is not cheating and is complying with the strict requirements detailed in the agreement,” said a spokesman for the senator. “She believes we must engage in tough, forceful diplomacy to combat Iran’s destabilizing behavior in the region,” her spokesman said. The US Office of the Director of National Intelligence and the International Atomic Energy Agency (IAEA) have both repeatedly said that Iran remains in compliance.

Likewise, a Warren spokesperson said that “as long as Iran continues to abide by the terms of the deal, she would return to it as president in order to prevent Iran from obtaining a nuclear weapon.” And a Sanders aide said that “as president, Sen. Sanders would rejoin the JCPOA and would also be prepared to talk to Iran on a range of other issues, which is what Trump should’ve done instead of simply walking away. Rejoining the JCPOA would mean meeting the United States’ commitments under the agreement, and that includes sanctions relief.”

Longshot candidates Wayne Messam, a mayor from Florida, and spiritual leader Marianne Williamson also said they would return to the deal, with Messam vowing to make it a priority. Other Democratic candidates have been more evasive.

“My concern right now, my focus, is the denuclearization of Iran,” said New Jersey Sen. Cory Booker. “We need to be focused on best strategies to get us there. 2021 is a long time from now, and I’m focused on the steps we have to do right now.” The senator is a close ally of the pro-Israel lobby whose vote for the nuclear deal was long in doubt before he cast a decisive ‘yes’ vote for President Barack Obama’s signature foreign policy effort.

The other 10 candidates did not respond to Al-Monitor’s request for comment, including Sens. Amy Klobuchar of Minnesota and Kirsten Gillibrand of New York, Hawaii Rep. Tulsi Gabbard and former Texas Rep. Beto O’Rourke. All four voted for the deal in 2015, while O’Rourke was one of only 20 House members to vote against new Iran sanctions opposed by Obama in 2015.

And former Vice President Joe Biden, who is expected to announce whether he is running next month, remains a champion of the pact negotiated under his watch.

“Talk of a 'better deal' is an illusion,” Biden said in a statement when Trump pulled out in May. “It took years of sanctions pressure, painstaking diplomacy, and the full support of the international community to achieve that goal. We have none of that in place today.”

Indeed, the enduring Democratic support for the JCPOA comes as Trump continues to struggle on foreign policy in the polls. A CNN poll this week showed the president continues to get failing grades on foreign affairs, with 54% disapproving versus 40%.

Public support for the deal reached its all-time high right around the time the US withdrew, with 56% of respondents backing it in a Morning Consult-Politico survey versus 26% opposed. But the public remains extremely wary of Iran: 48% of respondents declared themselves “extremely or very concerned” by the country’s nuclear program in an Associated Press-NORC Center for Public Affairs Research poll in January.

“Democratic primary voters expect candidates to favor diplomacy over war,” said Dylan Williams, senior vice president of government affairs with the liberal group J Street. “Reversing Trump’s violation of the Iran deal should be an easy lift for them.”

The National Iranian American Council released its own white paper shortly after last year’s midterm elections calling on all 2020 candidates to “make crystal clear that their intent is to return to the JCPOA if elected and build on it as the floor, rather than the ceiling.” Council President Jamal Abdi told Al-Monitor that his organization “will be engaging all of the candidates to make similar commitments.”

And just last month, the Democratic National Committee passed a resolution calling for a return to the JCPOA to “restore America's commitment to an agreement made with allies and prevent a renewed nuclear crisis in the Middle East.” But fissures are already appearing between advocates who believe the United States should move quickly to undo Trump’s sanctions and others who want Democrats to leverage them to extract additional concessions from Tehran.

Robert Einhorn, a former adviser for nonproliferation and arms control in the Obama administration, and former sanctions coordinator Richard Nephew have made that case on social media and in the pages of the Atlantic. They are expected to unveil a 100-page paper on the issue at a Brookings Institution event next week.

“It’s important to engage in negotiations with Iran on what I call a renewed nuclear bargain,” Einhorn told Al-Monitor. “And in particular, renewing that original bargain in a way that extends some of the timelines — defers some sort of the expiration dates for key nuclear restrictions.”

In particular, the UN conventional arms embargo on Iran expires in 2021 under the terms of the JCPOA, shortly after the US election. As a result, a Democratic president would be rejoining the deal just as Iran is slated to receive more of its benefits, making it even more controversial than in 2015.

But some experts point out that Iran is slated to hold its own elections in 2021, making further concessions to the United States unlikely when the United States was responsible for walking out in the first place.

“You’d be doing it in an environment of heightened mistrust given US non-compliance with the deal, and of course you’d be doing it when the politics of both countries are overlapping and complicated,” said Jarrett Blanc, who oversaw the JCPOA’s implementation in the Obama administration. “Immediately after a new [US] president is inaugurated in 2021, it ultimately turns into a presidential election season in Tehran.”

Meanwhile, opponents of the deal are eager to lock in Trump’s hard line. Senate Armed Services Committee Chairman James Inhofe, R-Okla., has even discussed adding language to this year’s national defense authorization bill that bar a future president from re-entering the nuclear deal.

Tehran is closely watching the US debate over the JCPOA and presidential campaign. Sanders in particular has generated considerable enthusiasm in the Iranian media upon announcing his candidacy last month.

“More so than ever before, Iranian strategic thinking on the JCPOA is informed by politics, not just policy,” said Behnam Ben Taleblu, a senior fellow at the Foundation for Defense of Democracies, which opposes the deal. “Iran’s cognizance of the trans-Atlantic divide over Iran policy, as well as the divide within the US over Iran and re-entry into the JCPOA incentivizes the regime to wait for a better deal.”