Literally and figuratively, the two sides of Yemen's split parliament are miles away from each other and show no sign of reconciliation. 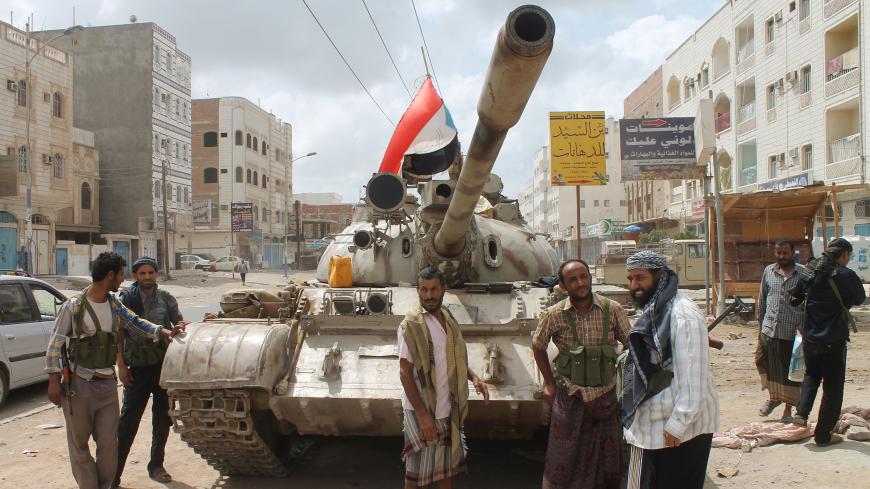 BEIRUT — As fighting continued in other areas of the country, part of Yemen's divided parliament met April 13 in Seyon for the first time since the civil war began four years ago. By April 16, the legislators were discussing a draft bill to classify Houthi rebels as a terrorist group.

The mostly Shiite, Iran-backed Houthis had suspended the parliament in February 2015. Last month, Yemeni President Abed Rabbo Mansour Hadi, a Sunni who leads the Saudi-backed internationally recognized Yemeni government, called the first session to order. Hadi, Vice President Ali Mohsen al-Ahmar and some of their supporters have been living in exile in Saudi Arabia for about nine months, but traveled to Seyon for the occasion.

The head of the General People's Congress, Sultan al-Barqani, was unanimously elected speaker by the 138 members who attended. Later, six more members attended subsequent sessions. The full parliament has 301 members.

In an April 16 statement, Barqani described the first session as “historic.” He postponed all further meetings until the end of the holy month of Ramadan, which lasts from early May to early June.

While the parliamentary session could be seen as further fragmentation of the Yemeni state amid the division between the internationally recognized government and the Houthis over the executive and judicial authorities, it pulled the rug out from under the 116 parliamentarians in Sanaa supporting the Houthis. That part of the parliament, which had resumed sessions in August 2016, is headed by Yahya al-Rai.

Trying to muster enough members for a quorum (half the total membership plus one, or 151), the Houthis also held elections April 13 to fill the vacant seats of 34 deceased parliamentarians. But the elections only filled the 24 seats in Houthi-controlled areas, leaving the Sanaa part of parliament with 140 seats.

The divided parliament is an extension of the split in Yemen’s other state institutions between the Houthis’ authority and the internationally recognized government. The country’s official news outlet produces two versions of the news. Each governorate has two governors. A Central Bank in Sanaa is controlled by the Houthis, while the one in Aden is run by the recognized government. This is all in addition to there being two heads of the Supreme Judicial Council and two public prosecutors.

The Yemeni parliament, whose members were last elected in 2003 for a six-year term, is still the same today. The opposition had refused to hold elections that were scheduled for 2009, demanding constitutional amendments. The ruling party was headed by then-President Ali Abdullah Saleh. The opposition agreed to postpone the elections for two years.

The Arab Spring events in 2011 and an assassination attempt that killed several people and injured Saleh also hampered legislative elections. (Later, Saleh resigned in 2012 and was assassinated in 2017.)

In September 2014, the Houthis’ takeover of the capital Sanaa in 2014 and their 2015 dissolution of parliament and suspension of the constitution prolonged the parliament term — as did Saudi Arabia's Operation Decisive Storm, launched in March 2015 in support of Hadi. That campaign was designed to limit Iran's power in Yemen.

Commenting on the Seyon session, parliament member Jaabel Taaiman told Al-Monitor, “Parliaments in the world are governed by majority, not by political divisions. The minority has no right to object to any decision taken by the numerical majority."

According to Taaiman's reasoning, the 138 members attending the Seyon parliament session constituted a quorum. “After excluding the 34 dead members of parliament, the legal quorum of half plus one would be 134 instead of 151," he said.

He noted that the April 13 session in Seyon — attended by the president, vice president, prime minister, ambassadors from 19 countries and parliamentarians representing all the Yemeni provinces — was in the best interest of Yemen’s unity. “This is a step toward establishing the federal state in accordance with the outcomes of the National Dialogue Conference [2013-14] that brought together all political components,” he noted.

Opposition parliament member Ahmed Saif Hashed told Al-Monitor, “Convening the parliament in Seyon in tandem with the elections in Sanaa is not coincidental. This falls within the project of tearing up, fragmenting and invading Yemen as much as possible and imposing full trusteeship over it.”

He continued, “The existence of more than one parliament would fragment Yemen … [and] expose the stability of Yemen to continuing threats and shake the region’s stability.”

Hashed urged the parliamentarians who met in Seyon to refrain from holding sessions that he said lack legitimacy and legal quorum, arguing that “by recognizing a Seyon parliament, they would be legitimizing the war and its outcomes at the expense of the interests of Yemen and its people.”

On April 10, protests broke out against the plans to hold the Seyon parliament session. The Southern Resistance movement and the Southern Transitional Council, which call for the abolition of Yemeni unity and demand the secession of South Yemen, claimed responsibility for the protests.

But lawyer Mohammed al-Maswari agreed with Taaiman's assessment. He told Al-Monitor, “In light of the implementation of the constitutional procedures and based on parliamentary bylaws, there cannot be two parliaments, only … the one in Seyon. Parliamentary meetings in Sanaa are neither legal nor constitutional."

At the international level, US State Department spokeswoman Morgan Ortagus praised the Seyon parliament in a statement April 13. During an April 15 meeting with Hadi in Riyadh, US Ambassador to Yemen Matthew Toler also welcomed the parliament's convening. This was also the position of Britain's Ambassador to Yemen Michael Aron.

The parliament in Sanaa, however, issued a statement April 13 flagging the Seyon session as contrary to the constitution and parliament's internal regulations, which both stipulate parliament shall be seated in the capital Sanaa, and any session outside the capital is invalid, unconstitutional and illegal.

Of note, the Yemeni division of parliament in Seyon shares similarities with its Lebanese counterpart during the Lebanese civil war. Lebanon's parliament resumed its activities in 1989 after a bloody 15-year war with the same regional and international extensions. Iran, which supported and still supports the Shiite Lebanese Hezbollah, is today also supporting Yemen’s Houthis. Under the patronage of Saudi Arabia and through the Lebanese parliament, the Taif Agreement of 1989, which helped end the war and is still applied today, was reached. Riyadh sponsored in 2011 the Yemen Gulf initiative.

History seems to be repeating itself with the two major regional players — Saudi Arabia and Iran — in Lebanon and Yemen, with two parliaments holding the longest terms in the world. Will the Yemeni parliament, like its Lebanese counterpart, succeed in instilling peace?