The State Department believes it can force political concessions on Damascus, in line with recent recommendations from a congressionally mandated panel of experts. 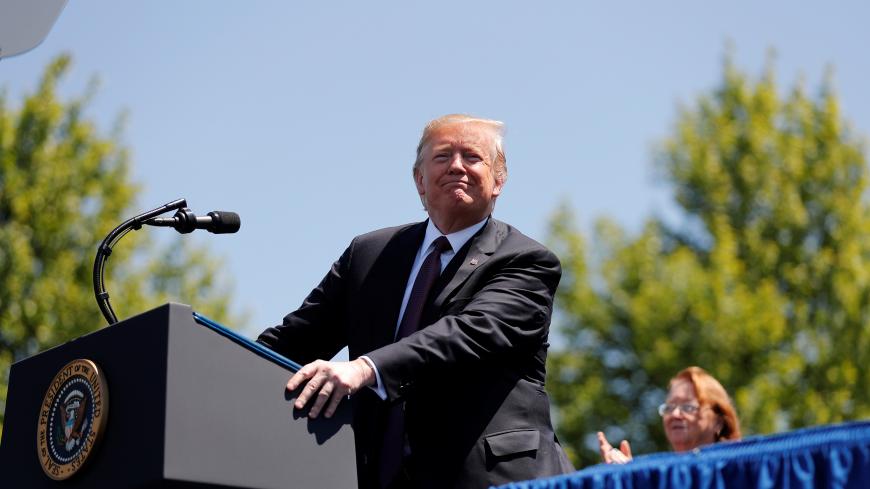 A senior State Department official told Al-Monitor that the Trump administration plans to intensify political and economic pressure on Syria in the coming months to compel the Bashar al-Assad government to “see reality and make concessions” regarding the stalled UN-backed peace process.

The remarks come as a bipartisan study group of experts and former policymakers commissioned by Congress shared similar recommendations with lawmakers earlier this month even as it tacitly acknowledged the long odds of success.

“Assad is unwilling to compromise and intends to retake all of Syria,” the Syria Study Group wrote in an interim report obtained by Politico. The report then goes on to list key recommendations including “continu[ing] to isolate the Assad regime through sanctions, diplomatic pressure, and denial of reconstruction aid.”

The pressure campaign comes as Assad’s forces are stepping up their offensive against the last rebel-held province of Idlib, which is largely under the control of al-Qaeda breakaway group Hayat Tahrir al-Sham. Meanwhile, talks on Syria’s political future are being led by Russia, Iran and Turkey, with the US-backed peace process called for under UN Security Council Resolution 2254 largely sidelined.

Secretary of State Mike Pompeo discussed the need to “fully implement” the UN resolution in his meeting with Russian Foreign Minister Sergey Lavrov earlier this week. The senior official told Al-Monitor that the administration’s goal is to force Assad and his allies to “engage the political transition process [as outlined under Resolution 2254] in a meaningful way.”

The official added that the United States has reiterated its warnings about the use of chemical weapons by Assad’s forces. The regime forces taking part in the Idlib campaign, the source added, “are bad actors, perpetrators of some of the worst abuses of the war.”

The Syria Study Group report likewise urges the administration to make clear that chemical attacks or “other forms of indiscriminate civilian targeting will bring a swift military response from the US and Europe.”

The report, however, sharply diverges with the administration on the issue of US troops.

Under the latest iteration of Trump's withdrawal plan, the United States will pull out troops every few months until there are 400 US soldiers remaining in Syria. This will include 200 soldiers in northeast Syria as part of what the Trump administration hopes will be an internationally policed safe zone that includes Turkey. Washington will maintain another 200 troops at al-Tanf in the southeast in the hope of countering Iran.

“The announced US withdrawal,” the report argues, “… undermines confidence in the American commitment to Syria and will increase the tendency of US partners and regional allies to seek separate accommodations or normalize relations with the Assad regime.”

US policy should aim to “strongly discourage Arab governments from reengaging with Assad,” the authors write. Over time, isolating Assad “may increase the willingness of Russia and domestic Syrian actors to compromise.”

The report also recommends restoring stabilization aid, which the administration has eliminated.

Sen. Bob Menendez, D-N.J., the top Democrat on the Foreign Relations Committee, argued that Trump administration policies have hindered the United States’ ability to counter Assad. “The administration has been moving away from that policy,” Menendez told Al-Monitor. “It’s outsourcing Syria’s future and our interests to Russia and that’s a big mistake.”

Following the report’s advice, he said, “could produce results.”

“Recent escalations of violence in Idlib against hospitals, schools and other civilian targets demonstrate Assad will go to any lengths to retake the country and destroy anyone who stands in his way,” Jameson Cunningham, the policy strategist for Americans for a Free Syria, told Al-Monitor. “This initial report makes clear that the United States must ramp up its efforts to pressure Assad to bring him to the negotiating table.”

The Syria Study Group also calls on Congress to confirm ambassadors to Iraq and Turkey and to pass the Caesar Syria Civilian Protection Act, which would sanction the Assad government and its supporters. The House passed the bill unanimously in January and Senate Foreign Relations Committee Chairman James Risch, R-Idaho, has promised to bring it up in the near future.

Finally, the report parts with the Trump administration policy on one other key issue: refugees. In addition to supporting countries that have absorbed the most refugees, it calls for resettling 5,600 Syrian refugees — or 0.1% of all Syrian refugees worldwide — in the United States in 2020 to “send an important signal to both European allies and regional host countries.”

Trump has barred Syrians from entering the United States as part of his travel ban on seven countries, which includes five Muslim-majority states. The administration also set the US refugee quota for 2019 at 30,000, a historic low.

Andrew Parasiliti contributed to this report