A new team at the US Defense Department is addressing the growing Russian threat to American military technology after Moscow's jamming complicated the Syrian battlefield. 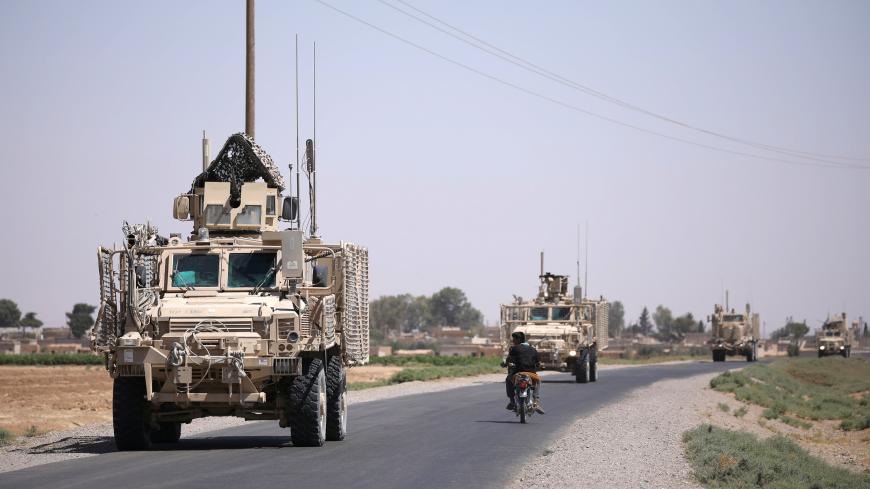 The US Defense Department has set up a new team to deal with the growing threat of Russian jamming of American military technology, Al-Monitor has learned, after the threat became pervasive on the Syrian battlefield over the past four years.

According to documents obtained by Al-Monitor, Acting Secretary of Defense Patrick Shanahan’s staff will set up a team with members from across the department “to regain US dominance in the electromagnetic spectrum” and identify any gaps in US strategy. The effort will be overseen by the vice chairman of the Joint Chiefs of Staff, Air Force Gen. Paul Selva.

Under the plan, first requested by the Senate in last year’s defense authorization bill, the Pentagon intends to provide Congress with an updated electronic warfare strategy and roadmap by September.

The Defense Department’s stepped-up posture comes after months of warnings from military officials that electronic interference from Russia and other countries had impacted US effectiveness on the battlefield.

Earlier this month, the Pentagon’s inspector general reported that electromagnetic interference had contributed to the US-led coalition fighting the Islamic State losing 11% of its intelligence, surveillance and reconnaissance coverage along the Iraq-Syria border, networks that are critical to spotting hostile forces and launching airstrikes. NBC News reported last year that the Russian military had jammed GPS signals to US drones in Syria.

The establishment of a team drawing from different military services and offices is just the latest example of the Defense Department’s efforts to handle the electronic warfare threat from Russia and other nations. In October, Al-Monitor reported that the Pentagon’s top tech incubator had begun investing in technology to protect radio links used to call in air and artillery fire from electronic interference.

The Defense Advanced Research Projects Agency, known as DARPA, is also dealing with electronic warfare as it looks to integrate robots into infantry squads.

“We spend a lot of time looking at how to control the [Electromagnetic] spectrum; how to operate in the EM spectrum in a real-time, flexible way,” DARPA Director Steven Walker said earlier this month.

But while the new cross-functional team comes into place, the Pentagon still has a so-called “executive committee” that works on the same subject, making it “unclear who will answer to whom, and how they will divide responsibilities,” according to Whitney McNamara, an analyst at the Center for Strategic and Budgetary Assessments, a Washington think tank.

Unlike most capabilities, none of the US military services "own" electronic warfare, experts say, creating redundancies.

“Since we’re just reentering competing in this space, we are more cautious about throwing our weight around,” McNamara said. “Russia does not see using things like jamming in the same way and feels like it’s a very organic part of its operations.”

McNamara added that “all echelons of Russian forces” have their own ability to launch electronic attacks on communications, though the Kremlin may try to rein that in. A 2017 report from the Estonian Ministry of Defense indicated that Russia “is stepping up its efforts to renew and modernize” its suite of electronic warfare capabilities, which is being complemented by changes to command structure and training.

Russia has deployed a host of systems into Syria, including the Mormuz and Krasuka platforms, with the first rotations conducted to protect Moscow’s troops in the country after Turkey shot down a Russian fighter jet in 2015.

But even as the Pentagon contemplates a new strategy for electronic warfare, Russia is developing a new suite of technologies that use a higher degree of automation functions for deployment alongside air defenses, such as the S-400 missile defense system. Next-generation systems could also be used to find and fix the location of moving targets and degrade precision-guided weapons, CNA’s Kofman added.

“This generation of electronic warfare that we’re dealing with with Russia is rather rudimentary,” he said. “This is actually more the beginning rather than the real demonstration of the challenge that the United States faces.”