Turkey has created a special fund to salvage debt-ridden construction companies, many of them government cronies, while relieving banks from bad loans, but the rescue operation is bound to put further burden on public finances and thus taxpayers. 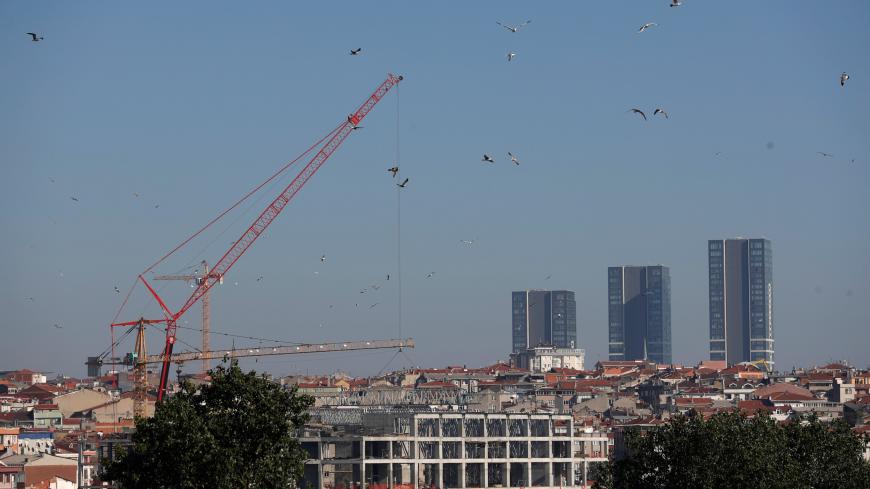 Turkey has a swelling stock of unsold new apartments, which is hurting the economy and taxpayers. Here, a crane is seen at the construction site of a new building in Zeytinburnu, a middle-class residential neighborhood of Istanbul, Sept. 24, 2018. - REUTERS/Murad Sezer

In times of economic crisis, the cost of recovery is often borne by taxpayers at the end of the day. Turkish taxpayers, who are no stranger to such injustice, are made to shoulder the burden again as Ankara scrambles to contain the economic crisis bruising the country since 2018. To clear the road wrecks the crisis has caused, the government is intervening both directly and indirectly, but, more often than not, its measures enlarge the gaps in public finances, billing the ultimate cost to taxpayers.

Public banks have been used in efforts to curb foreign-exchange prices, selling foreign currency at below-market prices. They have been tasked also with financing projects, including non-feasible ones, acting largely at the behest of President Recep Tayyip Erdogan. Public lenders Ziraat and Halk have provided the loans for Istanbul’s posh new airport after its builders failed to secure funds from foreign creditors. Even the acquisition of Turkey’s largest media group, Dogan, by the pro-government Demiroren group was financed through a Ziraat loan.

Under the worsening impact of the crisis, however, collecting on such loans issued on instructions from above has become increasingly difficult. With their balance sheets crippled by bad loans, public banks — placed in a sovereign wealth fund chaired by the president — have become largely incapable of lending. As a result, they have been provided with fresh capital, first via the Unemployment Fund and, most recently, through an injection of 3.7 billion euros by the Treasury, making them fit for new rescue operations, the first of which aims to salvage the construction sector.

The plan was first brought up April 10 by Treasury and Finance Minister Berat Albayrak as he announced measures to tackle the economic crisis. Albayrak said two separate funds would be set up for the debt-ridden energy and construction sectors “to clear bad assets via debt-shares swap and improve the balance sheets of banks.”

Subsequently, the Capital Markets Board announced April 18 it had approved the creation of a Brand Real Estate Investment Fund by Ziraat Portfoy, a subsidiary of Ziraat Bank. The pro-government daily Sabah reported April 29 that the fund would have a capital of 5 billion Turkish liras ($836.7 million) and take over residential and commercial properties that remain unsold in the hands of companies from the Association of Housing Developers and Investors, which produce brand projects.

Turkey’s housing market, which experienced an unprecedented boom under the Justice and Development Party (AKP), was among the first to plunge into turmoil amid the economic downturn. The housing-dominated construction sector was a main driver of the economy for years, thriving especially in profit-rich Istanbul. This capital accumulation model, which relied on domestic demand and external financing, began to lose steam from 2013 onward before hitting a deadlock after a 15-year heyday. Companies struggled to repay foreign loans as hard-currency prices shot up and the cost of external borrowing increased amid a simultaneous increase in inflation and interest rates on the Turkish lira. Housing demand plummeted, leaving companies with a large amount of unsold stocks.

The apartment stock, for instance, is estimated to have increased by more than 1 million in the past six years alone. The number of occupancy permits issued to new apartments from January 2013 to December 2018 stood at about 4.7 million, which could be read also as the number of apartments offered for sale. In the same period, only 3.6 million new apartments were sold, with the difference indicating the swelling stocks.

Yet not all companies saddled with stocks will benefit from the bailout scheme. The rescue operation via Ziraat will cover mostly the so-called “brand projects” or residential and commercial real estate developed by big companies such as Agaoglu, Sur Yapi, DAP, Sinpas, Kuzu, Nef and Torunlar, which have collaborated with the public housing agency TOKI and its subsidiary Emlak Konut. Construction companies top the list of loan defaulters and many of them are closely linked to the AKP.

The beneficiary companies, organized under the roof of the Association of Housing Developers and Investors, will hand over their stocks to the Ziraat Portfoy’s fund. Appraisement firms approved by the Capital Markets Board will determine the total value of the properties, which include shopping malls, office towers, hospitals and schools along with residential buildings. Following the handover, the loan debts of the companies will be subtracted from their receivables from the fund. Banks, meanwhile, will receive shares from the fund for their loan dues. Thus, debts and shares will be swapped, reducing the bad-loan ratios of banks and clearing the clogs that indebted builders have placed in the way of lending channels. The companies, for their part, will get rid of the pressure of banks, offload their stocks, even if on discounted prices, and fix their balance sheets to become eligible for loans again.

But what about the fund, which will function as a sort of a sponge soaking in the dirty water? How will it sell the assets and provide earnings? Amid the decline in demand, home prices as well as returns from real estate investment partnerships have gone through the floor. According to central bank data, housing prices in Istanbul, for instance, dropped 1.7% in February from the same month in 2018. With inflation factored in, the real decrease is nearly 18%. For Turkey in general, the decline is about 13.3%. With such a sharp drop in the prices, the fund’s prospects are rather bleak.

In the current economic climate, the fund appears destined to go into the red. In other words, it is the public Ziraat Bank that will incur losses. The Treasury might still help it out with capital injection, but ultimately, all those operations are swelling the public debt and raising the cost of rolling it over, bringing closer the prospect that Turkey will have to go to the International Monetary Fund. The government’s mounting interest expenses eat into the budget shares of education and health care, foisting the burden of imprudent policies on taxpayers at the end of the day.

Moreover, there is already speculation that real estate stakes accumulated at the “sponge” fund might be sold well below their value to some sub-funds close to the government. Thus, public losses might also turn into profits for certain cronies down the road.