US condemnation of Muslim Brotherhood would cost Turkey dearly

If the Donald Trump administration brands the Muslim Brotherhood a terror organization to please its Gulf allies and Egypt, it will create a major headache for Turkey. 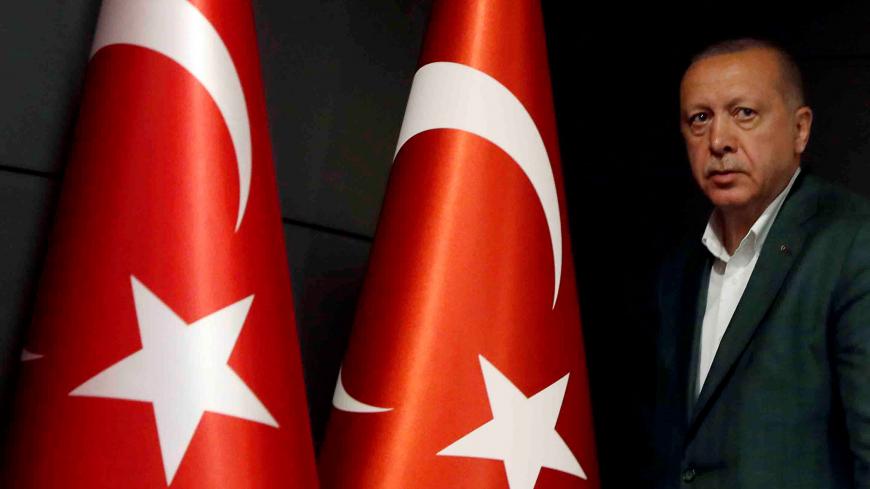 US President Donald Trump's threat to brand the Muslim Brotherhood a foreign terrorist organization could pound the final nail into the coffin of Turkey’s desire to form a Muslim Brotherhood belt from Middle East to North Africa.

It could also herald a new problem for Ankara: what to do about thousands of Muslim Brotherhood members who have taken refuge in the country in years past.

Trump's announcement that he is considering a terrorist label for the Sunni Islamist organization came after his April 9 meeting with Egyptian President Abdel Fattah al-Sisi. The issue adds strain to already beleaguered US-Turkey ties and is pressuring Ankara to make a decision about its Muslim Brotherhood policy.

Turkey has aimed since 2011 to have Muslim Brotherhood regimes replace the dictators deposed in the Arab Spring uprisings. Turkey’s ruling Justice and Development Party (AKP) signed on to several adventurist foreign policy projects that first lost in Egypt, following the coup that overthrew the country’s Muslim Brotherhood-linked president, Mohammed Morsi.

Then Turkey suffered similar blows in Syria, Libya, Iraq and Tunisia. The latest addition to the list of deposed autocrats is President Omar al-Bashir of Sudan.

Although the organization’s generic name in Egypt and Syria is the Muslim Brotherhood, the movement operates under different labels in other foreign countries: al-Nahda in Tunisia, Islamic Action Front in Jordan, Hamas in Palestine, Iraqi Islamic Party in Iraq, Social Action for Peace in Algeria and National Islamic Front in Sudan. The movement is known as Reform in Bahrain, Kuwait, the United Arab Emirates (UAE), Yemen and Somalia.

In many countries, political extensions of the Muslim Brotherhood are either partners of the rulers or represented in the parliaments. Even in Egypt under President Hosni Mubarak, despite all the efforts to root out the movement, the Brotherhood was engaged in politics through independently elected lawmakers and representatives in several other chambers and labor unions.

Thus, applying the terrorist brand to such an expansive movement with extensive influence over political and social life in many countries would not only unsettle Turkey, but have global ramifications. One should keep in mind that then-US Secretary of State Rex Tillerson had warned in 2017 that such a move would totally upend US foreign relations.

Turkey’s partnership with the Brotherhood began decades ago. During the Cold War, several books written by Egyptian and Syrian Muslim Brotherhood members were translated into Turkish in the 1960s to fight communism. In the 1970s, Turkey’s spy agency had cooperated with the CIA and Mossad to use Muslim Brotherhood ideology against the Baathist regimes in the region. There was even speculation that some members of the movement had secretly received military training in Turkey against then-Syrian President Hafez al-Assad. After his notorious 1982 massacre in Hama to end a Sunni uprising, some movement members took refuge in Turkey and established a solid relationship with Turkey’s political Islamists, which were AKP’s predecessors.

However, unlike its predecessors, the AKP translated these contacts and relations into a soft power mechanism for foreign policy, shaking to its core Turkey’s traditional strategy of maintaining distance from such Islamist movements.

When the Muslim Brotherhood came to power in Tunisia and Egypt at the outset of the Arab Spring, the AKP began scheming to bring the movement to power in Syria and Libya as well. The Syrian Muslim Brotherhood, recognized by more than 100 counties as legal representatives of the Syrian opposition, has been the most important element of the Syrian National Council and Syrian National Coalition of Opposition and Revolutionaries. These efforts caused no discord with the United States or Turkey's other Western allies — not until the Islamic State gained strength in Syria. However, the Gulf bloc led by Saudi Arabia sees the Brotherhood as an existential threat to its monarchy.

Although exact figures are not available, some 5,000 Muslim Brotherhood members are estimated to have gone to Turkey. These people engaged in counterpropaganda efforts against Egypt and Gulf states, establishing four TV channels in Turkey. When Qatar, under pressure from its neighbors, expelled seven of the movement's leaders in 2014, Turkey again opened its doors.

One should also keep in mind that US ties with the Muslim Brotherhood also date back decades. It's no longer a secret that the Muslim Brotherhood had promised to fully comply with international agreements that Cairo is a party to even before Egypt's strongman Mubarak stepped down in 2011. Yet, Trump’s foreign policy indicates a major divergence from Washington’s traditional stances. Supporting the Saudi-Egypt axis against Iran is an important aspect of this new strategy.

So what can Turkey do if the United States condemns the Muslim Brotherhood? Can Turkey continue to be the "hope of the entire Islamic world,” as Brotherhood spokesman Youssef Neda once said? No doubt Turkey will raise loud objections, but it will become much more difficult for Ankara to use the movement as a means of soft power. The Turkish government could opt to be pragmatic on the matter, which has already inflicted many losses to the country's foreign policy.

As it is, Turkey has already lost a significant amount of its clout over the Middle Eastern and North African peoples because of its support of the Muslim Brotherhood. It has offended various groups, including the Iraqi people by providing refuge to that country's Muslim Brotherhood-affiliated former Vice President Tariq Al-Hashimi, Fatah by openly favoring Hamas in the intra-Palestinian conflict, secular segments of Tunisia by providing unconditional support to al-Nahda, those Libyans who support Gen. Khalifa Hifter by backing Islamist forces in Tripoli and the Sudanese who wanted to see Bashir’s demise.