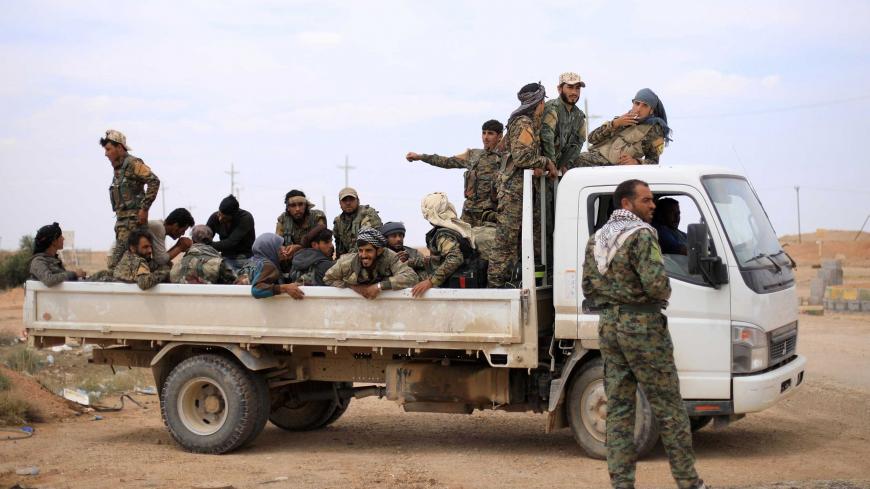 Weeks of Arab protests against Kurdish control here have mostly quieted during Ramadan but are expected to resume after the holy month ends June 4. Deadly incidents in early May left a decidedly tense atmosphere. The residents are wary of speaking to the media and refuse to use their real names, citing fear of being killed or arrested.

The river basically splits the province into east and west. During Al-Monitor's visit May 20, oil tanker trucks were parked along the regime-controlled western side, while a boat plied the river, “stealing our oil,” a young local resident with a checkered scarf wrapped across his face told Al-Monitor tersely while staring across the river.

He claimed that diesel is three times as expensive in Shuhail as it is in the Kurdish-dominant north, despite the proximity of key oil fields, and that this price gouging is only one of many ways the US-backed SDF is making local residents desperate. (There have been reports, however, that US-led coalition troops and SDF forces have fired on regime ferries transporting oil from the Shuhail area.)

Armed teenagers at small SDF outposts along the river seem to be watching the cross-river trade. They are mostly local Arabs who, struggling to survive after years of war, have been co-opted by the SDF, residents said, as is happening in Raqqa province.

“Yell at them. They're afraid of us,” the young man with the checkered scarf sneered, referring to the teenagers at one of the outposts.

Shuhail was once seen as a stronghold of al-Qaeda factions, until the Islamic State (IS) swept the area and took control in mid-2014. Between September 2017 and early 2019, the SDF, backed by international coalition airstrikes, liberated the IS-held areas spanning from eastern Deir ez-Zor to the Iraqi border. Many local Arabs took part, including former fighters for the opposition's Free Syrian Army (FSA).

A former FSA leader from Shuhail who now keeps a low profile and asked not to be named told Al-Monitor few people in the town support IS, al-Qaeda or related extremist ideology.

“A few do," he said, "but that doesn't justify what [the SDF is] doing. A 70-year-old man was killed. Four young men who had fought IS in the ranks of the SDF and two civilians were [killed] too. Why?”

Male relatives of those killed in a mysterious raid May 9 agreed to meet May 20 with Al-Monitor in the home of a widely trusted local resident.

Some of the young people who were killed had fought alongside the SDF during the battle to retake Baghouz in March, after local Arab anti-IS armed groups were sidelined due to lack of financial support. The families of those killed in the raid blamed the Kurdish-led SDF for their deaths. Some media claimed US special forces were behind the attack.

“My 18-yar-old son, Hail Saleh al-Faraj, heard voices and went to the roof of his house to check. The fighters killed him ... and then broke into his house,” said an elderly man who arrived at the meeting on one of the area's ubiquitous motorcycles. Grief marked his face and words.

“My other son, 15, heard the noise and the scream of his brother's wife and went to help her. They shot him in the leg,” he added. The attackers then reportedly went to a house on another street and shot a man, who died.

“After this shooting, we were surrounded by the vehicles and they called out on loudspeakers for the civilians to leave their homes and surrender," the elderly man said.

A young man at the gathering told Al-Monitor, “The SDF killed my father and two brothers," even though the teenagers had fought for the SDF in the past.

He showed a photo of one brother's dead body. "They took my brothers' phones, money, everything," he said.

Everyone denied that the victims had any connection with IS.

“Our village has been subjected many times to raids by the SDF and coalition forces looking for IS fighters,” the young man claimed. “They sneak into the village, killing anyone outside or who opens his door.”

He said many young men in the village enlisted with the SDF and have been attacked many times by IS fighters, so they initially thought IS was behind the May 9 raid. He added, bitterly and with a touch of fear, “The SDF faked reports to the coalition forces saying that this village contains IS cells. They could attack us at any time."

Local Arabs as young as 15 who had fought in the battle for Baghouz claimed at the meeting with Al-Monitor that some SDF commanders were Kurds from Turkey who did not speak Arabic, while most of the men on the front lines doing the actual fighting were local, impoverished Arabs.

A meeting between the SDF and the dominant tribe, the Oegaidat, was held following the raid in a bid to defuse tension. It took place at the nearby al-Omar oil field, where international coalition troops are stationed.

At that meeting, "[The SDF] told us protesting was prohibited,” one of the young men said, adding, “We can't say anything against them. They are ruling by fear.”