The politics behind the visa denial for veteran Palestinian official 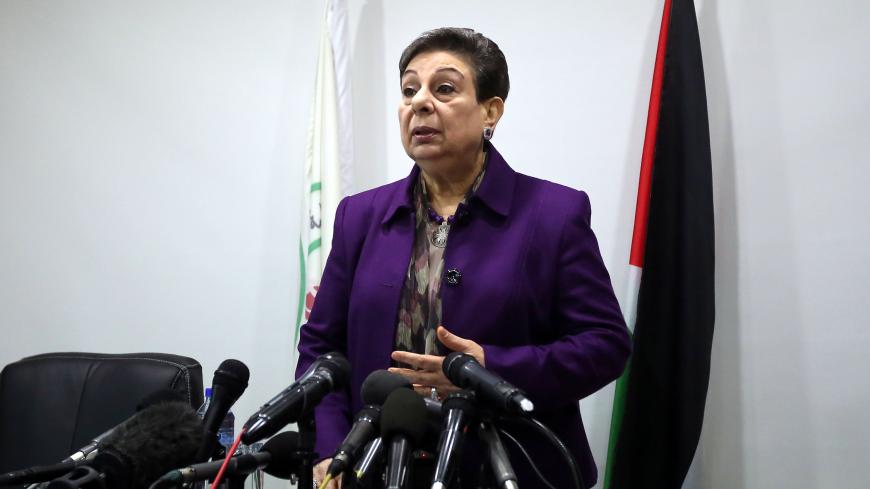 The US State Department denied Palestinian politician Hanan Ashrawi an entry visa May 13. A State Department official told the Associated Press that the United States "does not refuse visas based solely on people’s political views or statements,” but Ashrawi and others believe the visa denial is a blatantly political act.

One can’t help but recall the words of US Secretary of State Mike Pompeo, who, speaking to students at Texas A&M University on April 15, said, “I was a CIA director, we lied, we cheated we stole … we had entire training courses. It reminds you of the glory of the American experiment.” Though Pompeo was referring to the actions of the CIA, the State Department may be engaged in similar tactics when it says that the denial of Ashrawi's visa was not a political act.

Ashrawi told the Associated Press that "of course," it was a political act, and one that was full of “pettiness and vindictiveness.”

Ashrawi, 72, is a member of the PLO Executive Committee, a position she has held since 2009. She's also a grandmother, and several of her grandchildren live in the United States. She told Al-Monitor that she completed her graduate studies at the University of Virginia in medieval and comparative literature and that she visits the United States two or three times a year.

Ashrawi is an advocate for women’s rights, a staunch believer in nonviolent struggles and an active campaigner against corruption, including in the Palestinian government. She is still an academic and loves pursuing civil society work. She has received numerous awards for her work, including the Sydney Award in 2003 for her commitment to human rights and to the peace process in the Middle East, as well as the Mahatma Gandhi Award in 2005 and the Olof Palme Prize in 2016. Ashrawi is an honorary fellow at the University of Oxford.

​Husam Zomlot, a former Palestinian representative in Washington DC and current ambassador to the UK, told Al-Monitor that the Donald Trump administration wants “to delegitimize our national struggle and reframe the conflict as a local Israeli one. They want to address Palestinian needs but not Palestinian rights, while at the same time they want to legitimize Israel’s so-called divine rights.”

When Ashrawi's visa was denied, Zomlot tweeted that the Trump administration was afraid of her: “The enemy of this administration is something you so powerfully and eloquently represent and present: the truth. And you have something they don’t have: credibility. This will only make millions of Americans want to hear you more!”

James Zogby, the founder and president of the Washington DC-based Arab American Institute, believes the visa denial was intended to silence Palestinian voices. “The Trump administration is denying Americans the opportunity to directly hear Palestinian reactions to the ‘deal of the century,’" he told Al-Monitor. "Authoritarians believe that they can impose their views by the use of force and by silencing discussion and free and open debate. This we will not tolerate. They want to determine the fate of the entire Palestinian nation and don’t want them to have the opportunity to object."

Zogby, an adviser to Bernie Sanders' presidential campaign, insisted that this strategy of silencing debate will not work.

Daniel Kurtzer, a former US ambassador to Egypt and Israel, said, “Denying her a visa is outrageous and a sign that the Trump administration does not care to hear legitimate Palestinian views.” Kurtzer said Ashrawi “has been an ardent supporter of peace and an equally ardent opponent of violence for more than three decades. She has also been a vocal critic of Israel’s occupation and a steadfast supporter of Palestinian political rights. She is exactly the kind of person that US audiences and the US 'peace team' need to hear."

Aaron Miller, who worked as a peace envoy to the Middle East for both Republican and Democratic administrations, told Al-Monitor that he kept hoping there was some technical reason Ashrawi's visa was denied, because, "I don't want to accept that this administration has come to a place where its desire to pressure Palestinians has become so intense that it cannot abide any criticism of US and Israeli actions and, in the process, sadly undermines not only any semblance of fairness in American policy but American values.”

Former Palestinian Prime Minister Salam Fayyad told Al-Monitor that it is "wrong and shameful” to deny Ashrawi a visa to the United States. "Coming in a sequence of a series of actions that have wronged the Palestinians, including on Jerusalem, refugees, and the closure of our mission’s office in Washington, it also reinforces a well-grounded perception of anti-Palestinian bias."

Fayyad, who was one of the first victims of the Trump administration's anti-Palestinian bias in February 2017 when Nikki Haley was Washington's ambassador to the UN, said that he doesn't buy the assertion that it is the Palestinian official boycott of contacts with the administration that underlies this instance of visa denial. "Not long ago, another Palestinian, Naila Zakout, who is without any official capacity, was similarly denied. She is probably best known for her lead role in a recently released documentary on the role of women in the first Palestinian Intifada," Fayyad now a visiting professor at Princeton University, told Al-Monitor.

On the eve of rolling out its vision for peace in the Middle East, the Trump administration wants to control the narrative. Yet keeping outspoken Palestinian leaders like Ashrawi from entering the United States will not silence Palestinians. It will only deny Americans the right to hear another perspective.