Almost a week after King Abdullah appointed a new General Intelligence Department chief and asked him to deal effectively with anyone who tampers with constitutional foundations, Prime Minister Omar Razzaz reshuffled his Cabinet and appointed a conservative minister of interior, which could signal a return to tough handling of protesters and activists. 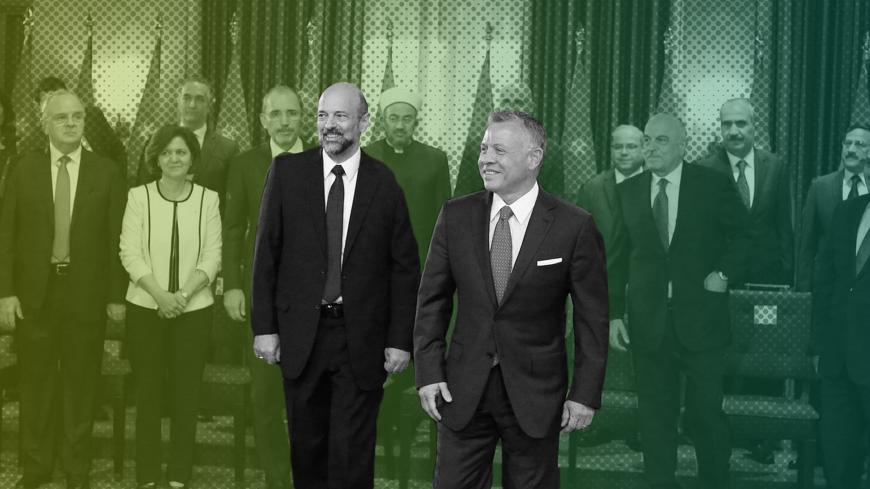 Jordanian activists fear a return to stiff security handling of their protests following a controversial government reshuffle May 9, which handed the Ministry of Interior portfolio to a septuagenarian conservative figure known for his hard-line positions. Almost 28 hours following the appointment of Salameh Hamad, 75, a number of vocal activists in Jordan’s so-called Hirak movement were reportedly arrested in various parts of the kingdom.

The reshuffle, the third in Omar Razzaz’s one-year-old government, took place almost a week after King Abdullah appointed a new General Intelligence Department chief. In a letter to newly appointed chief Gen. Ahmad Husni on May 1, the king asked him to confront anyone who dares tamper with the foundations of the Jordanian Constitution and who abuse the difficult and delicate circumstances the country is passing through.

In his response on the same day, Gen. Husni said he will follow the king’s directives of ensuring that the rights and dignity of Jordanians are preserved and dealing firmly with all attempts to tamper with Jordanian national values and anyone intending to encroach on constitutional pillars.

This unusual exchange and the focus on defending constitutional foundations prompted analysts to conclude that the country may witness a toughening up in dealing with activists, especially those who have crossed traditional red lines such as the monarch and the royal family.

Protests erupted last year against government plans to tighten an income tax law as requested by the International Monetary Fund. But some protesters broke ranks by calling for a constitutional monarchy and elimination of the Senate (upper house of parliament), whose members are appointed by the king. After two weeks of protests, the king sacked the government of Prime Minister Hani Al-Mulki in what was seen as a victory for Hirak.

Since Razzaz — who promised Jordanians a new social contract — was appointed in June 2018, public criticism has been mounting again. Both the political elite and youth activists perceive him as weak and indecisive. His government has not been able to deal with the country’s endemic unemployment, poverty and foreign debt challenges.

In recent months, activists — mostly young people from major Jordanian tribes — have become increasingly critical of the government. Some have openly criticized the royal palace, posting statements and videos on social media that have gone viral.

Protesters from one of Jordan’s largest tribes, Bani Hassan, clashed with anti-riot police near the city of Zarqa on May 11 following the arrest of a number of activists, including lawyer Naim Abu Rudiena. Those arrested had earlier adopted slogans that were deemed as critical of the royal family and had gone as far as calling for regime change.

On May 13, protesters from Thiban district in central Jordan held a sit-in during the night in protest of the arrest of a number of activists. These protests came one day after rioters in Awajan town in Zarqa burnt tires as security tried to arrest an activist.

Former lawmaker and vocal critic of the regime Hind Al-Fayez was taken in on May 16 after a warrant for her arrest was issued the previous day on a financial case. Activists who were protesting close to the Prime Ministry on that day called the timing of the arrest questionable. She was released a day later along with her husband, who had been detained for resisting arrest.

President of the Jordan Bar Association Mazen Irsheidat threatened May 12 that his members may stop attending State Security Court hearings unless Abu Rudiena, who could be charged with attempt to bring down the regime, is released.

The heightened tension between activists and security prompted head of the powerful Professional Unions Council Ahmad Samara Al-Zoubi, who is also president of the Jordan Engineers Association, to issue a stern statement May 12 calling on the government to release all “prisoners of opinion and peaceful expression” and steer away from “the mentality of aggravation, intimidation and fear.”

But political commentator Fahd al-Khitan attacked the statement in his column in Al-Ghad daily on May 14. He wrote that while the statement criticized the government and its approach, it failed to clarify its position on steep offenses against the symbol of the state at the protests. “These are unlawful offenses which are punishable under Jordanian laws. Doesn’t the authority of law apply in these cases and why didn’t the professional associations condemn such offenses?” he asked.

Khitan, who also criticized the government reshuffle, called on the professional associations to appreciate the delicate situation the kingdom is facing. He pointed to external challenges, including the much-anticipated US peace plan to settle the Palestinian-Israeli conflict, and to the possible flare-up in hostilities between Iran and the United States.

Analysts here believe the government is under pressure to restore law and order as well its authority, which has been challenged over the past year. They predict an escalation against those who criticize the royal family and violate the constitution. But there is also concern that too much clampdown may backfire as the country continues to suffer from poor economic performance and failing government policies, which has affected the livelihood of most Jordanians.