The Bahrain conference demonstrates yet again the American lack of understanding of the region, and their mistaken belief that one could skip the Israeli-Palestinian diplomatic process. 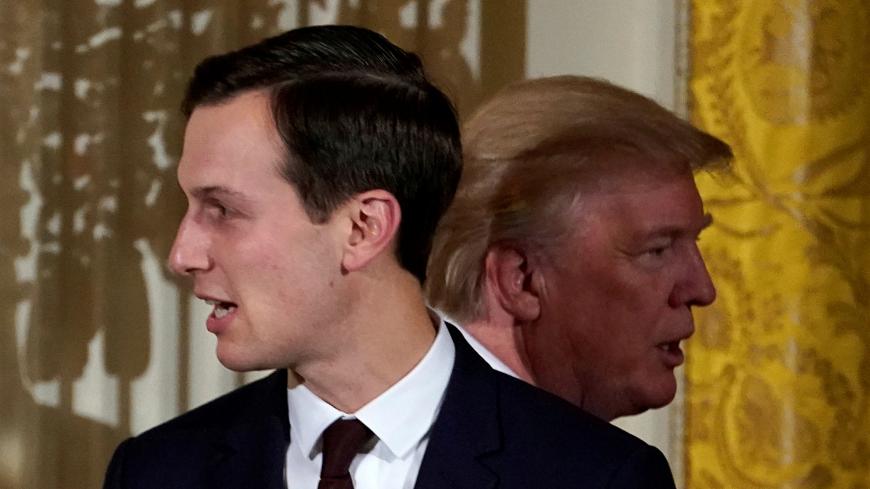 US President Donald Trump passes his adviser and son-in-law Jared Kushner during a Hanukkah reception at the White House in Washington, Dec. 7, 2017. - REUTERS/Kevin Lamarque

Washington announced in late May that it will hold a regional economic conference in Manama, Bahrain, at the end of June. The Trump team invited most Gulf states and other Arab countries, as well as Israel and the Palestinians.

If it was just a beginner’s mistake, without the possibility of causing any harm — if it was simply gratuitous — I would have nothing to say about the “workshop” for finance ministers, scheduled to take place in Bahrain. There have been plenty of gratuitous conferences in our lifetime, and it looks like the one the Trump team is planning for Bahrain could be added to the list. The problem is that this conference could actually be disruptive, especially after all the serious mistakes made by the Trump administration in its efforts to finally resolve the Palestinian-Israeli conflict.

US President Donald Trump’s experience is limited to the business world. Perhaps that's why he believes that if he suffocates the Palestinians economically and then tosses them some sweets, they will come running to accept whatever he offers — in coordination with Israel of course. He and his pair of peacemakers — White House senior adviser Jared Kushner and Middle East envoy Jason Greenblatt — are making a regrettable mistake. The lion’s share of the Palestinian narrative is a story of rage over ongoing humiliation at the hands of Israel and the Arab states. This effort to separate the diplomatic solution from an economic solution will be perceived by the Palestinians as akin to being told, “We’re giving you money, so give up your principles.” This would not help in advancing any comprehensive solution to the conflict. If anything, it would convince the Palestinians to adopt a harder line. It would intensify their anger and cause the pragmatic forces — who want to reach an arrangement — to find common ground with the extremists, who oppose any arrangement whatsoever.

Immediately after the signing of the Oslo Accord in the 1990s, efforts were made to expedite the diplomatic breakthrough with a series of economic conferences involving multiple participants, including Arab states with no diplomatic relations with Israel. The first such conference took place in Casablanca, Morocco, in October 1994, with senior leaders from Israel and the Arab world participating. Israel sent a large delegation, including many business leaders, but this scared the Palestinians and many of the other participants, too. I refused to attend, thinking that the event would be perceived as an Israeli invasion of the heart of the Arab world’s economy. The conference did, in fact, come under considerable criticism in the media, but not only that — it was a multidimensional media event. The world was thrilled by the sight of Arab representatives in their flowing robes and headdresses, meeting with the Israeli representatives decked out in business suits and chatting with them as if they were old friends. The euphoria surrounding the diplomatic breakthrough may have contributed to the conference’s mood, but in the end, the result was disappointing. No major business deals emerged from the event, but it did evoke a sense of panic among those who were concerned about our imperialistic tendencies.

We learned our lesson. In preparation for the second economic conference, which was held in the Jordanian capital of Amman one year later, I headed the preparatory team, which worked together with the Jordanian minister of economy. A concerted effort was made to lower our profile, reduce expectations and allow only limited meetings between businessmen (coordinated in advance). While we also presented some government projects, these were very focused and limited in number.

The Cairo Conference took place in November 1996, at the start of Prime Minister Benjamin Netanyahu’s first term in office. The next regional conference, which took place in Doha, Qatar, in November 1997, turned out to be the last of these annual events. At the time, it was becoming clear that Netanyahu had no interest in reaching any diplomatic arrangement. Israel’s delegates were isolated, and no moves were made to advance joint business ventures. Just as other economic initiatives — such as the Regional Bank in Cairo and the Economic Secretariat in Morocco — fell apart without a diplomatic process, this was the end of the glory days of these regional economic conferences.

The Trump team doesn’t seem to understand the Palestinians, but it also fails to understand the other Arab leaders with whom it supposedly shares a common (diplomatic/business) language. Harsh words can be heard about the Palestinians in closed-door conversations with most Arab leaders, including leaders of the Gulf states. The Palestinian leadership is criticized sharply for missing countless opportunities and for making a long series of mistakes. They are discussed with anger and derision, giving the sense that they are some wart-like protuberance, and that the other Arab leaders would do anything to be rid of them. An inexperienced listener might mistakenly think that these remarks signify a split between the Arab states and the Palestinian leadership, or at the very least, a refusal to stand by their side. The truth, however, is that there is hardly any connection between what they say openly and what they actually do. Arab leaders know that their people in the town square are ardent supporters of the Palestinian cause, so they cannot ignore it.

We can suppose that anyone meeting with the leaders of the Arab states in early spring 1948 would have walked away with the impression that they had no interest in going to war against the Jews living in the Land of Israel. If the Palestinians wanted to fight them, that was their business. Then, just a short time later, those same leaders responded to the mood in the street by sending their troops to war against the newly formed State of Israel.

The idea of separating “economic peace” from some resolution of the Palestinian-Israeli conflict is nothing but a pipe dream. What will happen in Manama? The Palestinians, who personify the strength of the weak, will not attend the workshop. It is safe to assume that Qatar, which is boycotted by most of the other Gulf states, will not even be invited. The problem isn’t just that the conference is putting the cart before the horse — in other words, the economy before peace — but also that the party, which should benefit from aid before all the others, and the main provider of that aid, will not even be in attendance. Arab finance ministers who do attend the event will be very wary of showing the slightest sign of intimacy with the Israeli foreign minister or the Israeli business leaders in attendance. Meanwhile, Fatah and Hamas, which said that they will remain at home, will be able to finally rediscover the common ground that they lost: “The people shall dwell alone” (Numbers 23:9) This phrase, which is usually used referring to the Jewish people, can now be implemented in regard to the Palestinians — alone but united against everybody else.

This farce can still be avoided. The Trump team's diplomatic plan could be released on June 24, along with ideas to fund the economic initiatives that are either part of the plan or that would result from it, rather than presenting the economy and peace them as two distinct and separate issues. It is also possible to abandon the idea of the workshop entirely and postpone this pathetic meeting until the diplomatic plan, now a long two years in the making, is finally released. Scheduling an economic summit such as this before the diplomatic plan is presented and without the participation of the main players would be a very harmful mistake.