The ultra-Orthodox population is poor and faces a housing crisis, which has led their elected representatives to demand welfare and housing portfolios as conditions for joining the next government. 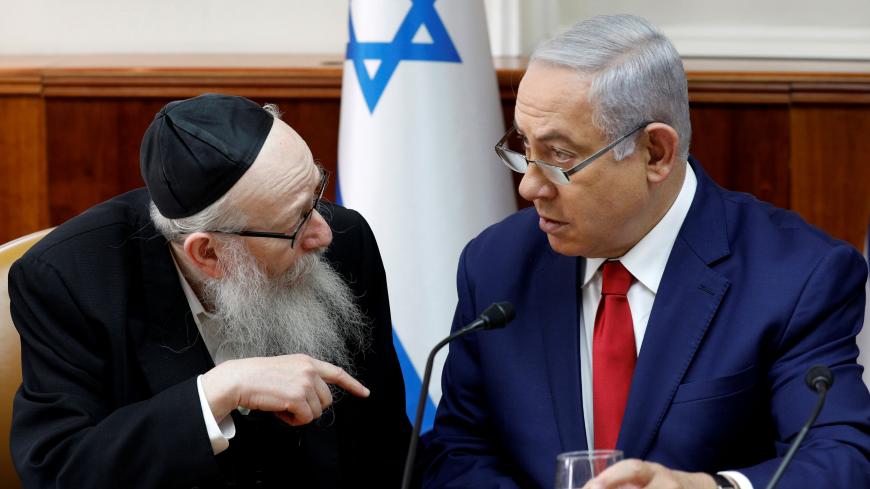 In the current round of coalition negotiations, leaders of the ultra-Orthodox sector are eyeing certain ministries, encouraged by their sector's increased integration into Israeli society over the last few years, their growing electoral strength — Shas and Yahadut HaTorah went from 13 to 16 seats in the April 9 election — and the fact that they are essential to forming a new governing coalition. Both Shas and Yahadut HaTorah are demanding control of the housing and welfare ministries and real power for their deputy ministers, including at the Ministry of Education, with the aim of benefits for their electorate.

Until 2009, Yahadut HaTorah had made do (for the most part) with the chairmanship of the Finance Committee and a deputy minister with only partial responsibility for the portfolio. This changed with Benjamin Netanyahu’s second government (2009-13), when the party demanded and received control over the Ministry of Health. Yaakov Litzman was given full control over the ministry even though he continued to hold the title of deputy minister. (Ashkenazi ultra-Orthodox have traditionally refused appointment to full ministerial positions because they do not want to be officially responsible for the policies of a secular Jewish state.) Litzman still holds the post and will probably continue to serve as deputy health minister in the next government. He can take credit for several major achievements during his long tenure even though he has been tangled up in criminal proceedings in the last few months.

Litzman has also been involved in frictions involving religious issues. For example, for several months he blocked construction of a secure wing (in the event of rocket fire from Gaza) for Barzilai Hospital, citing concern for ancient graves at the selected site. Nevertheless, he was also responsible for several important measures, including mental health reforms and inclusion of subsidized dental care for children in the health service bundle provided by the government. He continued to promote reforms such as these in the outgoing government, although he occasionally found himself caught in the dilemma of how to best balance his role as a representative of the ultra-Orthodox sector versus his responsibility to provide healthcare for the entire population.

Litzman's dilemma was particularly evident when he fought to stop people from bringing hametz (bread and other leavened products) into hospitals during Passover and when he intervened to ensure that his patron, the rebbe of Ger, and the rabbi’s wife, received preferential treatment while in hospital. On May 21, it was revealed that the rabbi of Hadassah Hospital had been inspired by Litzman when he demanded that emergency room staff prioritize religious patients on Fridays, regardless of medical urgency, so they would not have to violate the Sabbath.

Yahadut HaTorah’s current demand for the housing portfolio is rooted in one of the most serious problems facing the ultra-Orthodox community. A 2016 paper by the ultra-Orthodox Haredi Institute for Policy Studies and the Ministry of Construction and Housing states that there is a genuine housing crisis among the ultra-Orthodox resulting from rapid natural population growth. This can be attributed to the sector's low income, which makes it difficult for members of the community to afford the high cost of housing, and the special needs distinct to the ultra-Orthodox, including living in separate communities based on allegiance to specific Hasidic courts, early marriage and large families. The report concludes that the ultra-Orthodox sector alone will need 188,000 new housing units in the next two decades.

Apartments in ultra-Orthodox neighborhoods in major cities have become increasingly expensive. One response has been the creation of new ultra-Orthodox communities, including two, Beitar Illit and Modi’in Illit, on the West Bank. The latter were established despite the principled opposition of the ultra-Orthodox leadership to allowing their community to participate in the settlement enterprise.

In the current coalition negotiations, Aryeh Deri of Shas, the outgoing (and presumptive) interior minister, has made a point of demanding the return of the Planning Administration to Interior. It was transferred to the Finance Ministry in 2015, when Netanyahu formed his fourth government. The administration has enormous influence on the types of construction undertaken. Deri could, for instance, advance the construction of units with open-air balconies to meet the needs of his community, which prefers apartments with such balconies so that they can build a sukkah, an open-air booth, for Sukkot.

A senior ultra-Orthodox official told Al-Monitor that control of the Planning Administration would mean that the minister could force the heads of local authorities to set aside land for new neighborhoods for the religious and ultra-Orthodox communities and oblige contractors to allocate apartments for the sector. Yet, this would not be enough for Shas, which is also demanding the Housing Ministry, since it is most closely involved with strategic planning.

According to a source close to Deri who spoke to Al-Monitor on the condition of anonymity, “[Shas] would leave no stone unturned in order to bring about a sharp increase in construction for the entire population, with a special emphasis on the ultra-Orthodox sector, which is particularly needy.” In addition, the source said, the heads of local authorities will only receive permits to build new neighborhoods if they show a willingness to build neighborhoods that meet the specific needs of an ultra-Orthodox lifestyle.

Meanwhile, Yahadut HaTorah is also eyeing the Housing Ministry, which it would give to Meir Porush to oversee, and demanding the Ministry of Welfare. According to the Central Bureau of Statistics, half the ultra-Orthodox population lives below the poverty line. As a result, the community relies heavily on welfare. As far as Yahadut HaTorah is concerned, ultra-Orthodox control of the Ministry of Welfare would make it possible to emphasize ultra-Orthodox needs in the ministry’s budgets and targeted services.

The two ultra-Orthodox parties are also insisting that their representatives be appointed deputy ministers at the Ministry of Education, which has the second largest budget, after the Ministry of Defense. The government funds the independent education systems serving the ultra-Orthodox sector even though they tend to reject the ministry’s demand that they teach a core curriculum, that is, that they devote a minimum number of hours to teaching vital, non-religious subjects, such as mathematics and English. While a core curriculum is essential if the ultra-Orthodox are to be integrated into the workforce, the ultra-Orthodox parties insist on preserving educational independence while receiving government backing.

The ball is now in Netanyahu’s court. As an expert in macroeconomics, having served as finance minister, Netanyahu is surely aware that the best way to deal with the ultra-Orthodox sector and its particular issues does not necessarily require doing exactly what the ultra-Orthodox parties demand. That said, he will not be able to form a government without them. Experience suggests that Netanyahu will therefore not oppose their demands and will likely give them what they want in order to bolster his coalition. After all, the ultra-Orthodox parties are his most loyal allies.