The politics of mutual grief

Bereaved Israelis and Palestinians held an annual memorial event for victims on both sides of their conflict after the High Court of Justice overruled an attempt by Prime Minister Benjamin Netanyahu to prevent Palestinians from entering Israel to attend the ceremony, which is held on the same day that Israel honors its fallen soldiers. 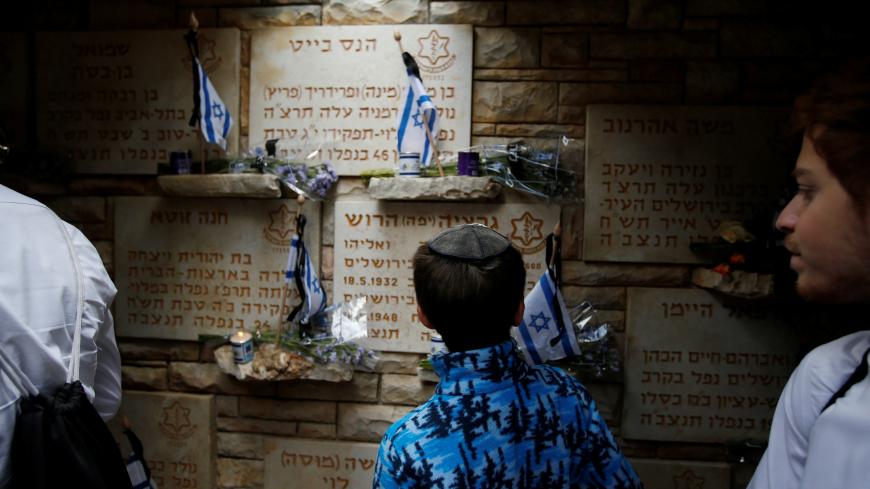 A youth looks at flowers and flags next to tombstones on Memorial Day at the Mount Herzl military cemetery in Jerusalem, May 8, 2019. - REUTERS/Ronen Zvulun

Right-wing activists demonstrated outside the joint ceremony, which has been held for the last 14 years by the Parents Circle Families Forum (PCFF) and Combatants for Peace. Hundreds of protesters turned out as occurred last year, after Defense Minister Avigdor Liberman tried to block the commemoration by claiming that it “violated [Israel’s] Memorial Day.” That the ceremony’s organizers included bereaved parents who had lost loved ones was not worthy of consideration in Liberman’s eyes.

This year, Prime Minister Benjamin Netanyahu, who also serves as defense minister, tried to prevent the ceremony from taking place. Netanyahu is himself a bereaved brother, and it is his right, of course, to memorialize his own loss in any way he sees fit. The bereaved parents who organized the ceremony have chosen to memorialize their children and other relatives by making a statement: It is not enough to merely remember loved ones and to agonize over their deaths. One should also actively work toward ending the conflict causing the loss of life.

As happened last year, the PCFF and Combatants for Peace petitioned the High Court of Justice (HCJ), which overruled Netanyahu’s decision to ban entrance to Israel by several hundred Palestinians to take part in the ceremony. The justices wrote, “No defense minister should intervene in the way in which a family wants to express its private grief and sorrow over the premature death of a loved one.” They also rebuked Netanyahu by asserting, “The defense minister is charged with maintaining the security of Israel’s residents, and his task is to protect Israel’s inhabitants from all dangers. We do not see how the ceremony constitutes a danger to the Israeli public.”

Netanyahu fought back, tweeting, “The High Court’s decision is mistaken and disappointing. There is no place for a ceremony that equates the blood of our sons to the blood of terrorists.” In this way, Netanyahu tried to brand as terrorists all the bereaved Palestinians participating in the memorial ceremony.

Shortly afterward, Netanyahu’s son Yair tweeted a statement in which he called the bereaved Israeli families “insane.” He wrote, “I understand that all the left-wing Israeli families in Israel are taking part in a perverted ceremony today in memory of terrorists? They are really insane, according to any basic human standard from the dawn of history.” The tweet was later erased.

The attempt to block the joint event and the negative atmosphere created by Netanyahu predictably riled up right-wing activists to demonstrate near the bereaved parents. They used every derogatory name they could think of, among them “capos” and “Nazis,” and shouted “Go to Gaza,” “Death to Arabs” and “Death to left-wingers.” A few chanted epithets and “We won’t light candles for your dead,” and some wished upon the Palestinians, “May your village burn down.”

“This incitement against us is crazy,” PCFF member Aaron Barnea told Al-Monitor. “We have paid the ultimate price — our children’s lives. How does the prime minister’s son dare call us insane? He’s the one who’s crazy himself.”

Barnea believes Prime Minister Netanyahu tweeted what he did because he has an agenda that includes fighting the HCJ. “He simply found another reason or excuse to hurl accusations at the High Court,” Barnea asserted. Indeed, Yariv Levin, justice minister-designate in the government Netanyahu is assemblying, hurried to claim, “If anyone needed more proof that [Israel’s] justice system needs a fundamental, thorough and immediate overhaul, we just got confirmation today.”

At the joint ceremony attended by about 9,000 people, Mohammed Unbus, a Combatants for Peace member from the Tulkarm refugee camp on the West Bank, delivered an emotional speech. He said, “My dear brother, I hate the violence that caused me to lose you.… I still believe that the vortex of violence will only come to an end through joint action in order to create change in this holy land.”

A shocked Wajia Salame Tamizi, from Ibna, a village in Hebron, exclaimed to Al-Monitor, “Netanyahu accused us all of being terrorists?” She continued, “I lost my brother Hazem in demonstrations held in the village against the occupation in the course of the first intifada [1987–1993]. Soldiers entered [the village] and shot at everyone. Another three teenagers were killed in the event, and dozens were injured.”

According to Tamizi, bereaved Palestinian family members believe that there is a chance for peace and that the occupation and violence must come to an end. “We don’t want to eat hummus together,” she said. “What we want is to just stop the killing on both sides. We can only stop the violence by getting to know our neighbors and feeling the pain. But evidently there are those who aren’t interested in ending the occupation or the violence and also not the suffering.”

Barnea told Al-Monitor that Netanyahu had created an ugly atmosphere following years in which the ceremony had been held respectfully and quietly. He thinks Netanyahu objects to a Palestinian presence in Israel because it could lead Israelis to begin to believe that it is possible to make peace and to end the conflict. “This is his agenda, and he clings to it,” Barnea asserted. It seems that many bereaved families hold this belief who have bravely decided to express their pain and grief in the way they have chosen.

Yuval Rahamim, chairman of the Israeli Peace NGO's Forum, lost his father in the Six-Day War, in 1967. He spoke at this year's event, sharing his feelings about listening year after year to senior politicians addressing the bereaved families at memorial ceremonies in military cemeteries.

“When I got older, I began to understand what they were talking about there, from the podium, and started to feel uncomfortable with all the speeches,” Rahamim said. “The Kiryat Shaul Cemetery is viewed as an important cemetery, so prime ministers and defense ministers honored us there with their presence. Slowly but surely, I began to understand that I was playing the part of a bystander in a play that wasn’t mine. The belligerent chatter, victimizing ourselves and threatening others, the inflammatory rhetoric, sanctifying a struggle without an end in sight. Every year the politicians made their appearance at the podium, more cynical and shameless by the year, turning our searing pain into an election rally for the next unnecessary war, to the march of folly that continues on and on, the military narrative that reigns in the country. Politicians are fueled by hatred of Arabs, and they fuel our fears of Arabs as well.”

This year, perhaps more than ever, it seems that most of the Israelis and Palestinians have lost faith in peace and cannot see an end to the conflict. In recent days, May 4-5, four Israelis and dozens of Palestinians in Gaza were killed in another short cycle of violence involving Hamas and Israel.

Bereaved parents on both sides of the conflict have chosen a brave, uncommon way of coping with their grief, even though not everyone can understand it. As the HCJ justices determined, “This is the heart of freedom of expression, of personal autonomy. This is what gives individuals the option of writing and designing their own life-stories, each person in their own way.”