The anti-occupation group Breaking the Silence prepared its own Eurovision billboard, showing tourists the other face of Israel, that of West Bank occupation. 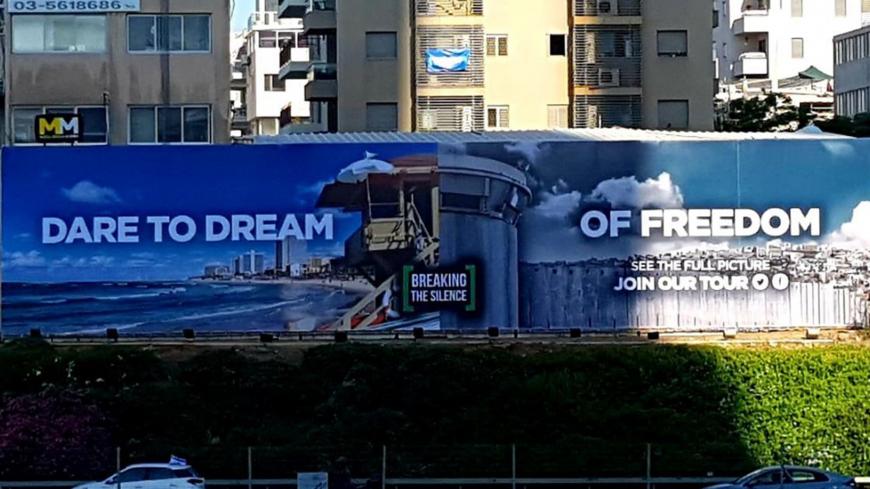 A billboard erected by the anti-occupation group Breaking the Silence aims to show Eurovision tourists the other side of Israel. Posted May 14, 2019. - Twitter/@palestinalibre

About 200 million human beings in Europe and throughout the world will view the final Eurovision event taking place this year in Tel Aviv, with 41 participating countries. And thousands of tourists are in Israel for the popular Eurovision Song Contest 2019. The Israeli Public Broadcasting Corporation — which Prime Minister Benjamin Netanyahu would love to eliminate — worked hard this past year to try to produce the most splendid, impressive, and largest event in the history of Eurovision, which was founded in 1956. The grandiose semifinal show May 14 adopted the competition’s motto, "Dare to Dream," and even persuaded Madonna to sing at the finals. Madonna’s recruitment to the artistic part of the competition was made possible by the donation of $1 million by Israeli-Canadian millionaire Sylvan Adams and half a million dollars more by another philanthropist who wants to remain anonymous.

In its desire to present artistic power, Israel is making a statement to the world: that the country is not what you thought. It certainly does not resemble what you see on television news broadcasts about Gaza or the West Bank.

The last time the Eurovision contest was held in Israel was 20 years ago, in Jerusalem’s International Convention Center. Much has changed since then: This time, Israel knew that if it held the competition in the holy city, many countries would consider boycotting the event. And the local Jerusalem ultra-Orthodox Jews would also not make it easy for the organizers.

Tel Aviv was chosen as a compromise. The Israel of 2019 is far more religious, chauvinist, ultra-Orthodox and extremist than it was in 1998, when Dana International graced the event with her presence. In this spirit, the producers of the event prepared a humorous clip in the style of a musical called “The Land of Sun and Honey.” The clip included recommendations of sights to see in the country and sought to teach tourists something about the strange customs and the in-your-face (some would call it vulgar) behavior of the Israelis. The clip opened with Lucy Ayoub (one of the four Eurovision emcees) and Elia Greenfield (songwriter) receiving tourists in Ben Gurion Airport. “You’ve heard that this is a land of occupation and war,” they sang, “There is much more than that here.”

A human-rights organization, Breaking the Silence, tried to brandish a large black flag above the sea of colorful flags waving in the Eurovision site in Tel Aviv. The organization also placed a giant billboard at the entrance to Tel Aviv to remind the Eurovision tourists and Israelis that the country has another side to it that is far less smiling, happy and excited.

On the left side of the sign is the lovely Tel Aviv seashore and a lifeguard hut, but on the right side is the separation wall that surrounds the West Bank city of Hebron and an Israel Defense Forces (IDF) guard station. The sign reads, “Dare to dream — of Freedom,” which is this year's Eurovision slogan. The tourists and Israelis were also invited to join a tour with Breaking the Silence members in Hebron. Simultaneously, the organization wrote the following message on its Facebook page: “Enjoy the sunny beaches and exciting nightlife, just don’t forget that there’s a lot more to this place than fun and games. We know it’s hard to tell by looking at Tel Aviv, but there is another side to Israeli society. An hour away from your hotel, throughout the occupied territories, millions of Palestinians are still living under military rule.”

Unsurprisingly, the Breaking the Silence sign created an uproar. Public Security Minister Gilad Erdan called the group “a despicable organization” and noted that “again it finds the time to disseminate lies about the State of Israel.” Erdan suggested that instead of inciting people against the settlers in the City of the Fathers, as Hebron is known, Breaking the Silence should take tourists on an introductory tour of the “terrible human rights violations of the Hamas rulership in Gaza” or of the Palestinian Authority “that insists on funding terrorists and glorifying murderers.”

Politicians were not the only ones who became furious at Breaking the Silence. Many Israelis, who were raised on the narrative of “the whole world is against us,” felt that the organization acted as party poopers by sabotaging a rare opportunity for Israel to display itself in a better light. While European eyes are on Tel Aviv, and despite calls by boycott, divestment and sanctions (BDS) people and Roger Waters for a boycott of Eurovision, Israelis hope to set aside their security troubles for a moment. For just one week, they want to present Israel to the world as a high-tech powerhouse that also boasts beautiful ocean coastlines, diverse eateries for all palates, holy places for all religions and even a city like Tel Aviv, which long ago became one of the world's gay capitals.

The question is the motives behind the provocative billboard. After all, the giant sign targeted tourists who did not heed BDS’ calls for a boycott and came to Israel only a few days after an armed conflict with Hamas and the Islamic Jihad. Were the Breaking the Silence people trying to dampen what little sympathy remained for Israel and instead increase international pressure on it? Surely the group knows that if it fails to convince the Israelis of the benefits of peace and ending the occupation that there is no chance that international pressure will bring about conciliation — and certainly not pressure from European countries that are viewed by many Israelis as being prejudiced, even hostile to Israel, regarding the Palestinian conundrum.

In an interview with Al-Monitor, Breaking the Silence CEO Avner Gvaryahu made clear that his organization has not given up on the Israelis. He said his organization continues its activities in schools and “anywhere that we are given permission to enter and voice our experiences from our stint in the IDF and the injustices of the occupation.” He also said the organization cannot keep silent “when the [far-right] Smotrich-Netanyahu people are leading Israel into apartheid policies.”

The Breaking the Silence protest involving Eurovision was not a routine campaign for the group. Its leaders pondered quite a lot over the issue, but decided that this was not the time to remain silent; the occupation goes beyond internal Israeli affairs. “Our political enemies, the right-wing organizations, use evangelists and work closely with fascist and even neo-Nazi groups,” Gvaryahu said. “We turn to people who come to celebrate, people with liberal and democratic orientations; human-rights issues are very close to their hearts. Imagine countries such as Hungary or Poland in which we see an accelerated process of the dismantling of democracy. Let’s say one of them wins the competition in Tel Aviv so that the Eurovision will take place in their country next year. Don’t you think there would be a struggle? Members of Polish or Hungarian civil society would surely use the opportunity to tell the international community, “It is your duty not to ignore these dangerous processes, even though you’ll be celebrating a song competition in the very same second or minute.”

Gvaryahu said the Breaking the Silence protest is not designed to tell tourists, “Don’t come to Israel.” He said, “We are not in favor of boycotting Eurovision, but simply want to tell tourists celebrating freedom and equality and all the liberal values that Eurovision represents that we must not continue to hide our values in the closet. We, former soldiers, love the State of Israel but hate the occupation.”