Alicia Keys Going Ahead with Performance in Israel

The singer joined the ranks of Madonna, Alanis Morissette and Macy Gray by going ahead with her planned performance in Israel on July 4. 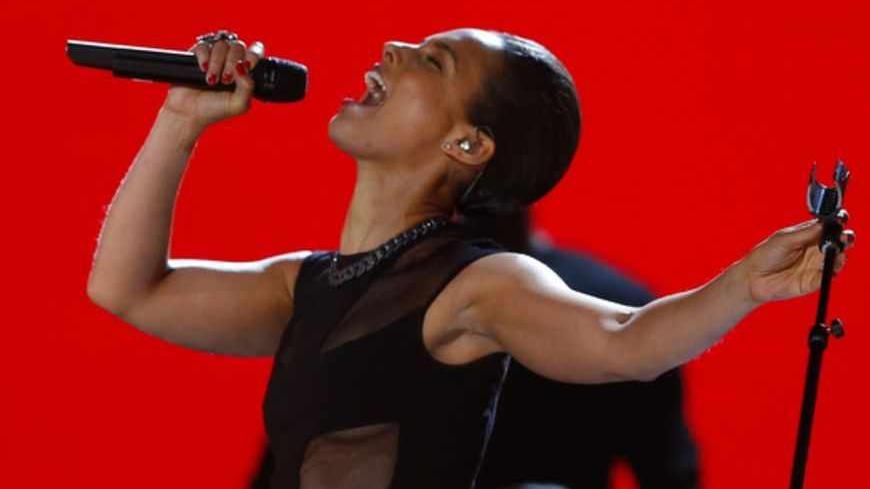 When Alicia Keys announced that she would be performing in Israel on July 4, she sparked an online war zone with herself at the center. Whether she knew it or not, she would become another poster child for supporters of Israel, like Madonna, Alanis Morissette and Macy Gray before her.

On the other hand, after Keys' announcement, Pulitzer Prize–winning author Alice Walker and Pink Floyd's Roger Waters both wrote open letters to Keys urging her to cancel her show in Tel Aviv.

“It would grieve me to know you are putting yourself in danger (soul danger) by performing in an apartheid country that is being boycotted by many global conscious artists," Walker wrote in her letter.

Walker and Waters are supporters of the Palestinian Campaign for the Academic and Cultural Boycott of Israel (PACBI), which began in 2004, growing out of the Boycott, Divestment and Sanctions, or the BDS Movement. Other artists in support of PACBI include the film and television director Ken Loach, the late poet and essayist Adrienne Rich and the legendary folk singer Pete Seeger

The Israeli group Boycott from Within backed the call of the open letters, and soon the social media-verse started to boil.

On the side of the online frontlines supporting the boycott, PACBI created a Facebook page titled Alicia Keys: Don't Be Fallin For Apartheid, Cancel Israel.

“Joined with Roger Waters and the global movement for a cultural boycott of Israel, we all ask Alicia Keys to stand on the side of justice and cancel her gig in Tel Aviv, Israel,” the About section reads. It also links to a petition signed by more than 15,000 people.

The Facebook page is connected to the website Refrain Playing Israel, which lists campaigns directed at artists performing in Israel, including the Pet Shop Boys, who played on June 23, and the South Korean rapper Psy, who is scheduled to perform in Tel Aviv on July 25.

And on YouTube, a video made by Students for Justice of Palestine went viral. It Palestinian women protesting Israel’s military occupation to the tune of Keys’ song “This Girl Is on Fire.”

The video was taken down on June 24, however, because of“copyright infringement.” A number of parody videos of “This Girl Is on Fire” have not been removed from YouTube. It has since been put back up.

“Alicia Keys should protect Palestinian children’s rights, and listen to the message from Palestinian women, rather than silencing them.” Rana Hamadeh, a Palestinian protester featured at the beginning of the removed video standing atop an Israeli military vehicle waving a Palestinian flag said to US Campaign for the Academic and Cultural Boycott of Israel.

Musicians and bands including Cat Power, Massive Attack, Coldplay, U2, Gil Scott-Heron, Elvis Costello and the Pixies have withdrawn from scheduled concerts in Israel in the past. In May, the scientist Stephen Hawking withdrew from an academic conference in Jerusalem, causing a media storm.

500 Artists Against Israeli Apartheid in Montreal issued a statement in February 2010 that inspired Irish artists to issue the Irish Artists’ Pledge to Boycott Israel six months later. South African Artists Against Apartheid released their founding declaration three months after that. The latter wrote, “As artists of conscience we can act to resist the normalization of Israel’s apartheid policies. Some may hide behind the excuse that art is apolitical. However, artists have not been hesitant in taking a position against racism and inequality. As South Africans we benefitted from such a position of conscience.”

As the BDS Movement has grown and more celebrities have canceled performances in Israel, the state and supporters have ramped up efforts to fight Palestinian solidarity activism and campaigns.

During May 28–30 in Jerusalem, the Israeli Foreign Ministry hosted the fourth international conference of the Global Forum for Combating Anti-Semitism, and the main message was that hasbara (propaganda) should be stepped up. An action plan was presented to the delegates that included “enhancing intelligence capabilities.”

“The delegitimizers are basically misfits, liars and anti-Semites,” Mitchel Bard began when he spoke of a plan by the BDS and Delegitimization Taskforce. “We need to have more information about the organizations promoting delegitimization, including their membership, funding and planned activities. Nations, foundations and other funders supporting BDS should be named and shamed.”

The Knesset has already passed a bill, on July 11, 2011, providing civil penalties for anyone calling for a boycott on Israel.

One hasbara initiative is the organization Stand With Us, which offers “emergency response on combating BDS” with the Buy Israeli Goods (BIG) campaign, the Israel Matters display, the Israeli Soldiers’ Stories tour and a campus website www.stopbds.com.

So while PACBI campaigned to persuade Keys not to perform, the Israeli side launched a countercampaign to make sure she did. On the Facebook page Alicia Keys Plays for Peace in Israel with the URL AliciakeysloveIsrael, it states, “We congratulate Alicia Keys for coming to play for all the people that love her and her music in Israel. Music builds bridges between people.”

The outfit behind the Facebook page is an organization called the Creative Community for Peace, established by an influential group of US entertainment industry executives. They also launched the petition “Don't Let Israel's Detractors Politicize Art,” which has been signed by close to 18,000 people.

“An amazing experience I will never forget,” said Rihanna. “I was most exited to see Jerusalem,” said Lady Gaga. “I couldn’t be in a better place to end my tour,” Madonna said. Other quotes followed in writing, “I’m bringing a message of peace, I think that’s what the region needs,” offered Paul McCartney. “Musicians spread love and peace and bring people together,” according to Bobby McFerrin. “I believe in the power of music,” Macy Gray contended.

While the message of peace is an honorable one on its face, the question detractors pose is how do musicians performing for an Israeli audience help build bridges, dialogue, and peace when no Palestinians living in the occupied territories can get to their concerts? Two men from the West Bank village of Bil’in point out this irony in a video in which they try to go see Madonna. Their permits were rejected, and no soldier was willing to let them pass the Israeli-controlled checkpoint.

“Psy's charismatic song and dance won't build bridges between Israel and the millions of Palestinians whom it oppresses,” PACBI writes on its website. “Palestinians in Gaza and the West Bank won't be allowed through the military checkpoints. … Psy would be performing for the Israeli apartheid establishment, while being told that he is building bridges through his music, a ridiculous claim.”

The decision to perform or refrain from performing in Israel is now the subject of scrutiny, controversy and often repercussion by those who are offended by the choice, whatever it is. Although Depeche Mode played in Tel Aviv on May 4, they did not publish photos of their concert or mention it on Facebook, Twitter or their Tumblr page. Their decision to perform, however, has been registered by the Palestinians and their supporters.

Those artists who cancel can be sure to be registered by the other side. Walker and Waters have both been labeled anti-Semites and inciters of hatred by pro-Israel groups and media.

In November 2011, Macy Gray stated on Twitter, “I had a reality check and I stated that I definitely would not have played there if I had known even the little that I know now.” Maybe a change of heart, maybe an attempt to play both sides.

As for Alica Keys, she recently released a statement to the New York Times confirming her plans to move forward with the show: “I look forward to my first visit to Israel. Music is a universal language that is meant to unify audiences in peace and love, and that is the spirit of our show.”

Janne Louise Andersen is a New York–based Danish journalist who specializes in the Middle East. She has written for Rolling Stone Middle East, The National and various Danish media such as Gaffa, Opinionen, Weekendavisen, and Politiken. On Twitter:@jannelouisa