Blue and White gets rare second chance in politics

New elections present a credible opportunity for the Blue and White to form the next government if it changes its attitude toward working with Israel's Arab minority. 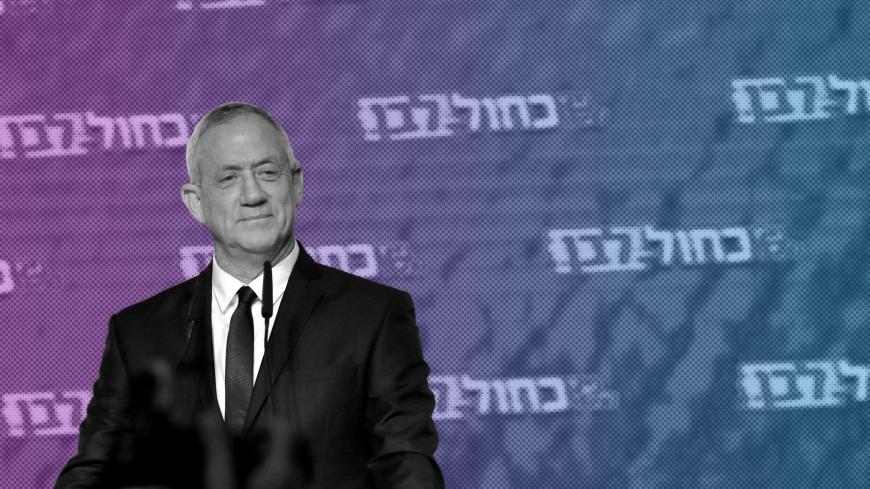 On May 29, the Knesset decided unexpectedly to dissolve and hold new elections on Sept. 17. Prime Minister Benjamin Netanyahu preferred to take this route rather than accept his failure to form a government and allow President Reuven Rivlin to entrust the task to someone else. This serves to effectively turn the April 9 elections into a “pilot,” the preview for the real event.

The April elections for the 21st Knesset have enabled Israel's political parties to assess their current levels of support. For voters, it has offered a glimpse at “the day after,” when candidates remove their masks and reveal their true priorities, never imagining that they will soon have to face their constituents again.

The Likud's election campaign as well as the ensuing coalition talks candidly revealed how Netanyahu’s first and last priority has been to save his own skin, to which end involves efforts to crush the Supreme Court and to change the country’s immunity law. Israelis saw Netanyahu push for an amendment allowing the Knesset to override Supreme Court rulings against unconstitutional laws and against administrative government decisions. In a frantic, last-minute bid to form a government, Netanyahu also pushed through the merger of Likud and Kulanu, headed by Finance Minister Moshe Kahlon, and offered opposition Labor Party Chair Avi Gabbay the job of finance minister, and more.

Israelis will now have the unprecedented opportunity to reexamine its political mistakes and possibly fixing them now, rather than three or four years down the road. The main opposition Blue and White should seize this opportunity to turn its impressive April 9 showing into a victory enabling it to form Israel’s next government.

The centrist Blue and White, led by Lt. Gen. (res.) Benny Gantz, swept up 35 Knesset seats, equal to the Likud’s take, despite being formed only a few months prior to elections. It maintains a fragile existence, amid public tensions among its disparate leadership, and it managed to bring out tens of thousands of people for a May 25 protest against government plans to clip the wings of the Supreme Court. It also withstood temptation when the Likud floated enticing suggestions of top jobs in a bid to draw potential renegades into a Netanyahu-led government.

Looking back, the demand by Gabbay prior to the elections that Blue and White commit ahead of time to forego joining a Netanyahu-led government — a commitment that Gabbay himself appeared almost ready to renege on in recent days — was what eventually undermined Netanyahu’s attempts to form a coalition. With a practical or even theoretical option of forming a Likud-led national unity government, with Blue and White members in key positions, Netanyahu could have played the right against the left in negotiations as he has in the past. He could have told each side that he was about to sign a deal with the other, leading both sides to rush to surrender some of their demands in order to join him and not miss out on an opportunity to be in government.

This did not happen. Instead, Blue and White stuck to its guns, refusing to join a leader under a cloud of criminal suspicion and robbing Netanyahu the chance to perform his acrobatics.

Under these circumstances, the ultra-Orthodox and right-wing parties raised their prices for joining Netanyahu’s government. Their commitment prior to the elections to only serve in a government led by Netanyahu ultimately proved insufficient. Netanyahu — squeezed by the right and not wanting Rivlin to task another lawmaker with forming and leading Israel’s next government — opted to lead voters to new elections. This pilot episode has shown Blue and White that it should adopt the same posture the next go round and refuse in advance to join a Netanyahu-led government even if the Likud wins.

During the last campaign, however, Blue and White made a serious mistake in the attitude it adopted toward the country’s 21% Arab minority. Given the current composition of the Israeli electorate, liberal Zionist parties cannot take power without the support, even if only tacit, of the Arab parties. Blue and White not only ruled out in advance forming a coalition with the Arabs should it win the elections, but also dismissed passive cooperation with them to prevent the formation of a right-wing government. This unprecedented move by a liberal Zionist party created a rift with Arab voters and was one of the reasons for a significant drop in Arab voter turnout. It is also why the Arab parties did not recommend to Rivlin that he task Gantz with forming the next government.

The combination of a totally justified refusal to join a Netanyahu-led government and the unreasonable boycott of Israel’s Arab citizens prevented Blue and White from having a go at forming Israel’s next government. If it wants another chance, the party must change its attitude toward the Arabs. A willingness to have a dialogue and cooperate with those Arab lawmakers open to engaging is a prerequisite, even if ultimately insufficient, for the party to rise to power.

It is safe to assume that a policy shift on the Arabs would show the door to former Likud Defense Minister Moshe Ya’alon and members of his right-wing Telem faction, which joined Blue and White. Gantz may have to pay the price of their walkout. Unlike the state of play prior to the April elections, this time Gantz will be able to bring on board Gesher, the small party headed by Orly Levy-Abekasis, whose social issues-oriented agenda may prove even more attractive to voters than Telem. Either way, if the Blue and White's hawks repeat the mistake of boycotting the country’s Arab citizens, as they did in boycotting the May 25 pro-democracy protest due to the participation of Arab Knesset member Ayman Odeh, Blue and White would be making a serious mistake by running with them in September.

When Blue and White leaders analyzed the results of its election debut, they realized that the majority of the party's voters were liberals opposed to Netanyahu and his right-wing allies remaining in power. Blue and White does not have to adopt the views of the Zionist left, but it can certainly position itself as Israel’s democracy party, one that fully understands the importance of security and defense but not less so the importance of a democratic regime that enables freedom, human rights and a stable Jewish majority. It can prove by its actions that the tensions among security, democracy and human rights does not necessarily contradict Israel’s essence as a Jewish and democratic state, despite the existing tension between these two concepts.

Blue and White now has a chance to take advantage of the opportunity Netanyahu gave it when he panicked last week. It can field attractive new candidates — retired generals and politicians — who could not run in the April elections for various legal reasons. A main opposition party in Israel has never been handed such a second chance.