The decision to hold new elections in September has thrown the Israeli parliament and government into political limbo. 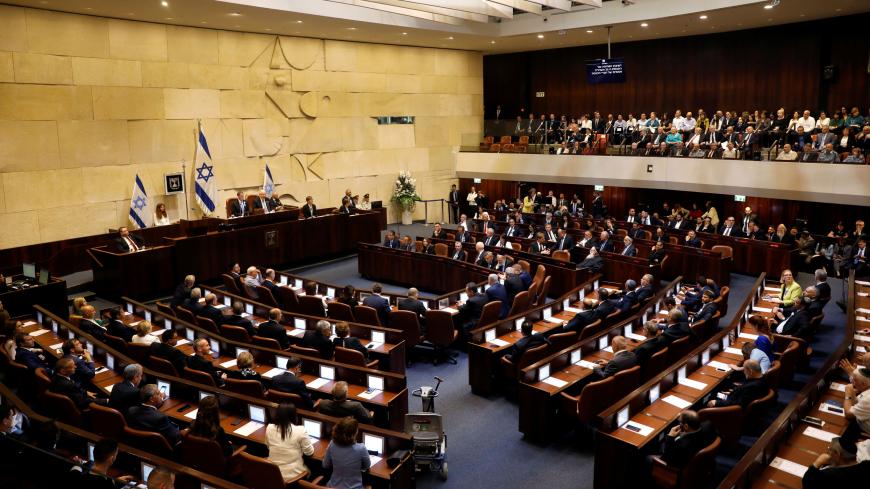 The Knesset decided on May 29 to disband and to hold new elections in September. The impact of that night’s decision, in contradiction of all logic, just one month after the Israeli parliament was sworn in, is now becoming clearer. Beyond the economic damage of two election cycles in one year, the governing system has entered a period of instability.

Israel has never had a situation where a leader of party who has an assured coalition majority has failed to form a government. It has never had a leader of a party who was charged with forming a government and failed, who did not return the mandate he received to the president but led the country to a new election. Thus the 21st Knesset, which was sworn in on April 30 and disbanded on Wednesday this week, had the shortest term in the history of Israel. It actually never even started work.

On June 3, after the Knesset chooses the new state comptroller, it will disband for a long election recess. This recess will end when the 22nd Knesset is sworn in toward the end of September. In the meantime, the 21st Knesset hasn’t started on a regular work schedule. Since a coalition was not formed, there has not been a chairman of the opposition. This isn’t a mere technical problem — this is an official role, one of the symbols of the state. The chairman of Blue and White, Benny Gantz, was supposed to be named as the head of the largest party, but with no coalition, there’s no opposition. Thus, the prime minister does not need to fulfill his obligation by law to periodically update the head of the opposition on ongoing or irregular security matters.

In addition, no Knesset committee has been formed save for a temporary finance committee headed by Knesset member Moshe Gafni (Yahadut HaTorah). This committee deals with matters that cannot be delayed, thus the committee authorized reparations for residents of the south following the latest round of fighting in Gaza. Aside from that, no legislative topic has been advanced. Knesset members who gave their inaugural speeches in the last two weeks will have to stash away their plans and the proposed laws they intended to advance. Some of them won’t return to the Knesset.

“This is an unprecedented and irregular situation that has never been seen in Israel," Zvi Zerahia, the financial columnist for the Calcalist newspaper, told Al-Monitor. "As a result of the chaos created on Wednesday night, Israel is being dragged into two election cycles within five months. Thus, there will be economic and budgetary ramifications to the state and the market.”

Zerahia has covered the political-financial system in Israel for 35 years. Like most commentators, Zerahia found it hard to believe that a new Knesset would disband itself — a deed that until the moment it was done seemed like science fiction.

He said, “The significance is that the government will be paralyzed for a period of a year total: from last December [2018] when the election was announced until next November [2019] when a new government is formed. In the meantime, ministers are serving with one foot out the door and all reforms are stuck.”

The redo election will have extensive economic ramifications. Holding them will cost the state coffers an estimated half a billion Israeli shekels, or $137 million. This is an expense that will be added to the accumulated budget deficit of billions of shekels that faced the new government. Dealing with the deficit was supposed to be one of the first tasks of Prime Minister Benjamin Netanyahu’s fifth government. But in this situation the deficit won’t be dealt with and will even grow, since the election economy will continue. Severe budget cuts are not on the table right now.

“International credit rating companies see the political instability in Israel and this could impact the credit rating, which is now very high,” Zerahia said.

Three ministers who are not Knesset members, since they were not elected to the 21st Knesset, are currently serving in the transition government: Justice Minister Ayelet Shaked and Education Minister Naftali Bennett of the New Right party (which did not make it pass the Knesset entry threshold), and Likud’s Communications Minister Ayoub Kara. Shaked and Bennett are considered reformist ministers in their areas, and the big plans they wished to advance stopped short with the announcement of the election at the end of 2018.

As for ongoing government work, this is taking place as usual. The government is expected to continue gathering every Sunday, but the issues brought before it and the debates will be of low intensity.

With respect to the security and diplomatic agenda, the fact that Israel has been led by the same person — Netanyahu — for a decade gives a certain stability to these issues, from the outside. On May 30, Netanyahu boasted that US President Donald Trump and Russian President Vladimir Putin agreed to hold a tripartite security summit in Jerusalem, which, according to Netanyahu, shows the diplomatic strength of Israel. The tripartite meeting will be led by US national security adviser John Bolton, head of the Israeli National Security Council, Meir Ben Shabbat, and his Russian colleague Nikolai Patrushev. The three will discuss regional security issues.

Despite the relative quiet on the southern border, Gaza still has the potential to flare up. If there’s an escalation, Netanyahu could convene the diplomatic-security Cabinet.

Plesner’s conclusion is that we must change the election method to give the prime minister more power and make him less dependent on the small parties in order to form a coalition. This would seemingly have prevented the current political crisis and would create a more stable system.