Avigdor Liberman has set his secular agenda as precondition for joining the coalition government. 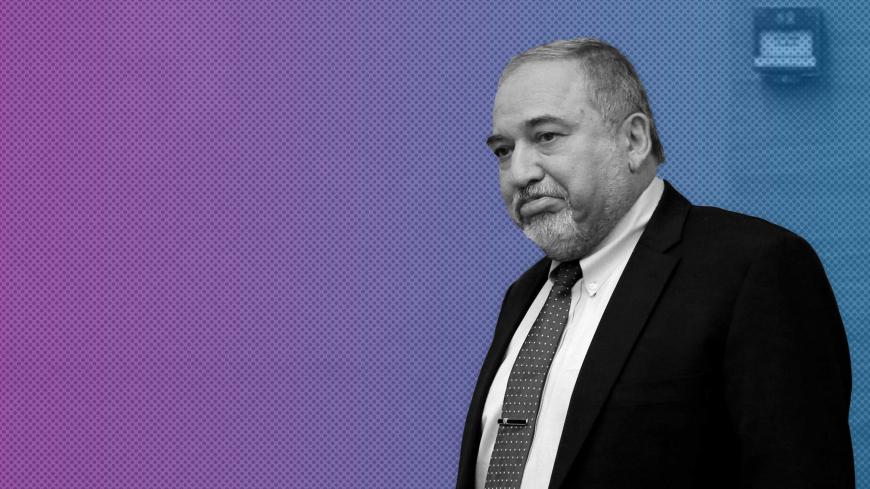 Israel's Defense Minister Avigdor Liberman arrives to deliver a statement to the media following the faction meeting of his party, Yisrael Beitenu, at the Knesset, Israel's parliament, in Jerusalem, Nov. 14, 2018. - REUTERS/Ammar Awad

About a month before the last election, the chairman of Yisrael Beiteinu, Knesset member Avigdor Liberman, told a press conference that ultra-Orthodox and ultra-Orthodox nationalists will have more sway in the next Knesset than ever before and that the next coalition will probably include 20-25 members who support a state run on the principles of Jewish law.

Liberman ran under the slogan “Right-wing and secular” and frequently attacked the ultra-Orthodox. His prediction served his message well: Only he could block efforts at religious coercion by the next government. He sent Knesset members from Yisrael Beiteinu to support public transportation in Tiberias, initiated by the city’s new Mayor Ron Kobi as part of his own fight against religious coercion in the town.

Liberman knows how to reinvent himself every election campaign. In 2019, he chose to be the flag-bearer for secularism. After all, his electorate consists mostly of Russian immigrants and is completely secular.

Liberman was right on two counts. First, he passed the electoral threshold with a respectable five seats, despite all the polls predicting he would be wiped off the political map. Second, he also foresaw the rise of the ultra-Orthodox parties. Including the ultra-Orthodox nationalist parties, they now hold 21 seats in the current Knesset: eight for Shas, eight for Yahadut HaTorah and five for the United Right.

“I returned to the Knesset with one seat less but much stronger than before,” Liberman told everyone who called to congratulate him after the election. It’s true. With those five seats, Liberman does hold the keys to the next government. Without him, Netanyahu has only 60 seats out of 120. With exactly the same number of seats as the opposition, it would be very hard for the government to function. While Liberman had six seats in 2015, Netanyahu had a majority government without him, and in fact headed such a government for the first two years of his term until Liberman finally joined it.

This situation, however, has created the greatest obstacle facing the formation of Netanyahu’s fifth government: the clash between Liberman and the ultra-Orthodox over the conscription law that would force young ultra-Orthodox Israelis to enlist. This is not a dispute over portfolios, at least as far as Liberman is concerned. He asked for and received the Defense Ministry for himself and the Absorption Ministry for a member of his party. But Liberman also wants to make good on his promises to the secular community, and they clash with the interests of the ultra-Orthodox parties, who returned to the Knesset much stronger than before and demand to be treated accordingly.

Meanwhile, over a month has passed since Netanyahu was tasked with forming a government and he doesn’t have a single coalition agreement. Each of his potential partners has taken a hard line. On May 12, the president granted him one final two-week extension to complete the job, which now seems more complicated than ever.

The following day, Liberman presented Netanyahu with his five minimum demands to join the coalition. Central to them was the conscription law, which he first proposed as defense minister. The law was passed by the Knesset in its first reading in July 2018, despite opposition from the ultra-Orthodox parties. Liberman takes pride in this law, which is considered more lenient than Yair Lapid’s earlier version, but still sets quotas for recruitment and imposes sanctions if they are not met. A Supreme Court ruling requires the Knesset to approve the new law by late July. While the ultra-Orthodox oppose its current version, Liberman refuses to compromise. A source in Netanyahu’s office told Al-Monitor that Liberman is a hard nut to crack, and that he will push the law all the way to the bitter end. As such, that end is not at all clear.

Anyone keeping track of the rhetoric coming out of Liberman and the ultra-Orthodox Knesset members over the last few days will see that Liberman is intentionally creating not a personal but an ideological dispute over religion and state. He wants at least one achievement that is a banner issue for his secular ideology and added the chairmanship of the Interior Committee to his demands so he can deal with these issues directly.

The ultra-Orthodox refused to remain silent in the face of what they regard as sheer provocation. In an interview with Reshet Bet on May 14, Knesset member Moshe Gafni of Yahadut HaTorah lashed out against Liberman’s behavior, saying, “If he thinks that he can run the country with his five seats, he can keep dreaming. What does he mean that he suddenly wants to chair the Interior Committee? What’s that all about? We asked to chair the Interior Committee, since we know much more about it than he does. What does he even know about it?”

Then, on Wednesday, ultra-Orthodox Knesset member Yisrael Eichler shifted into an even higher gear. In another interview with Reshet Bet, he accused Liberman of trying to block the formation of a right-wing government, claiming that Liberman had reached an agreement with Blue and White senior Yair Lapid to form a secular government without Netanyahu. Eichler concluded the interview with a call to Liberman: “Don’t bring down a right-wing government.”

With the ultra-Orthodox media seething, Liberman was called to respond. He did so in a long Facebook post, writing, “I’ve been subjected to countless threats over the last few days coming from Knesset members representing the ultra-Orthodox parties. They included statements like, ‘We’ll hold a new election or form a government without Yisrael Beiteinu.’ I regret that instead of holding serious discussions on the issues, the ultra-Orthodox parties have chosen to provoke, lash out and threaten.” Later in the post, Liberman clarified, “The position of Yisrael Beiteinu on matters of religion and state is perfectly clear. We support a Jewish state. We do not support a halachic state.”

Then, in order to quash the rumors, Liberman announced that even if he does not join the coalition, he will not support any other candidate “from within the Likud or outside the Likud.” Another rumor that he put to rest was that he was coordinating with Kulanu leader Moshe Kahlon to prevent Netanyahu from forming a government. He concluded, “We want a right-wing government in deeds, not in words. Take us seriously.”

As Liberman and the ultra-Orthodox squabble over who is preventing a government from being formed, the unique position that Liberman will hold in the next coalition becomes ever more apparent. He is the only member to advocate for a secular agenda alongside a right-wing one. Apart from Liberman, there are two other secular parties in the coalition: the Likud and Kulanu. On the other hand, the Likud’s agenda has become less secular over the last few years, while Moshe Kahlon’s Kulanu hardly stands out for its struggles pertaining to religion and state. This leaves Liberman as the only factor in the next government, when and if it is formed, who will serve as a vocal and authentic voice for the secular community. The fact that there can be no government without him gives him significant power.