Has Russia begun to play a role in Iraq?

Russia seeks a presence in Iraq similar to its presence in Syria but through Russian companies and economic, industrial and commercial agreements signed between the two countries. 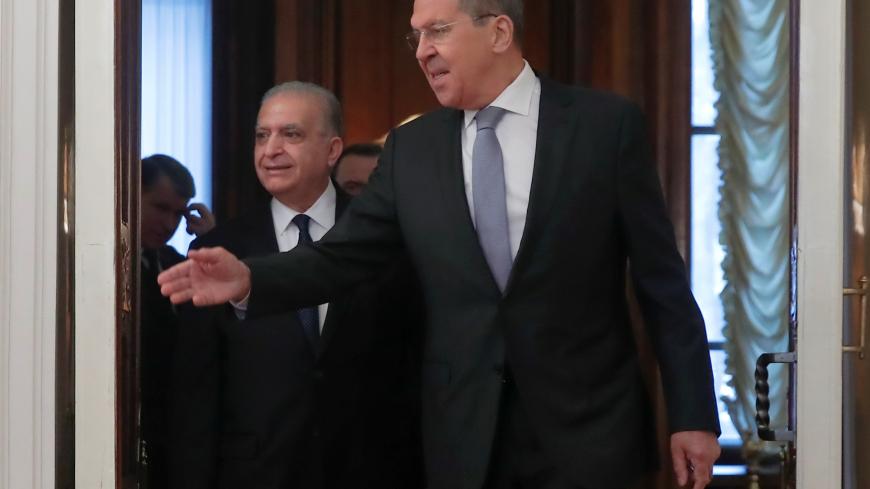 Member of the Iraqi parliament's Security and Defense Committee Hakim al-Zamili announced May 9 that negotiations were underway to buy an S-400 air missile system from Moscow.

Russian Deputy Prime Minister Yury Borisov said during his meeting April 26 with Iraqi Prime Minister Adel Abdul Mahdi that “the number of Russian companies in Iraq is on the rise.”

Ihsan al-Shammari, head of the Iraqi Centre for Political Thought, concurred. He told Al-Monitor that “Russia is working to compete with multinational companies in central and southern Iraq, particularly in the field of energy.”

“Russia also wants to compete with US companies operating in Iraq, and a lot of Russian investors and capital have started to flow into Iraq in recent months,” he added.

“Moscow is working to strongly enter the Iraqi economy in order to attract Baghdad to its political axis with Beijing and Tehran,” he continued.

Russia opened an economic office April 25 at the Russian Embassy in Baghdad, which proves that it is working on boosting its economic presence in Iraq. This also indicates that there is a Russian plan to acquire a part of the Iraqi market in fields covered by agreements signed with the Iraqi government.

Lukoil seeks to raise its investments in Iraq from $8 billion to $45 billion — another sign of Russia's growing economic activity in Iraq.

Ruslan Mamedov, a researcher with Moscow State Institute of International Relations, said that “Russian companies have become an important player in the oil market following the tightening of sanctions. Iraqi oil has become the most important in the region, and by extension, the Russian companies investing in this oil.”

For its part, Iraq may also perceive Russia as an opportunity to form a strategic partnership with a big country, especially considering that it is easier to deal with Russia than the United States or other Western countries. This, however, may lead it to a confrontation with the United States, which may not refuse its cooperation with Russia altogether but could try and set the boundaries of such cooperation.

Russian officials have increased their visits to Iraq over the past few months, especially Mikhail Bogdanov, President Vladimir Putin's special envoy for the Middle East and North Africa, who has visited Iraq three times since Abdul Mahdi embarked on the formation of the Iraqi government in October 2018.

These visits invite questions as to whether there are Russian steps to compete with the United States in Iraq and gain political influence that would help Russia expand its role in the region in the wake of the influence it gained in Syria.

Adel Badawi, a professor of political science at Baghdad University, told Al-Monitor, “Some parties in Iraq, especially those close to the Iranian axis, are pushing toward rapprochement with Russia and divergence from the United States."

This could take place either through Russian armament deals or by making Russia a key political partner in Iraq.

He added, “The purpose of pushing in this direction is to unify visions with the Iranian axis. Also, there is the foreign factor, and especially the Iranian factor, which pushes in the direction of convergence with Russia in order to have a Russian alliance gradually replace the US presence in the country in the framework of the struggle for influence. However, all of this makes Russia more of a friend than a future partner or ally of Iraq.”

Russian writer Andrei Ontkov told Al-Monitor, “Moscow is not seeking to gain influence in Baghdad, but if we are to talk about the development of political relations between the two countries, then yes, these are developing positively now."

He added, "Russia provided Iraq with various weapons that contributed to the fight against the Islamic State, and there are deals that were signed in order to sell Russian weapons to Iraq … we are witnessing ongoing and reciprocal meetings and visits between the two countries, which indicates the development of relations.”

“Russia is very interested in Iraq, and it is seeking to deepen its cooperation with the country. We are witnessing closer relations between the two countries amid very good prospects, and I am sure there will be further cooperation in the fields of economy, politics, security and military,” Ontkov said.

Iraq is seeking to benefit from Russian “expertise” in the economic, industrial, agricultural and military fields, in addition to oil and energy, at a time when Russia insists it does not intend to stop the investments that it started in the framework of its recent understandings with the Iraqi government.

Through its economic presence in Iraq, Russia is trying to hit two birds with one stone. On the one hand, it wants to either limit US influence or compete with the United States over such influence. On the other, it is trying to achieve further influence in the Middle East, which Vladimir Putin is setting his sights on.

Although Russia has the economic power and ability to maintain a presence in Iraq, this will be within certain limits drawn by the United States — such a presence will be ridden with challenges and obstacles. In other words, even if the Iraqi government is cooperative, some Russian targets might not be achieved.