Amid US pressure, Iran warns Europe of another ‘wave’ of refugees

Iran has warned Europe that if US sanctions continue to take a toll on its economy, it will no longer be able to host Afghan refugees. 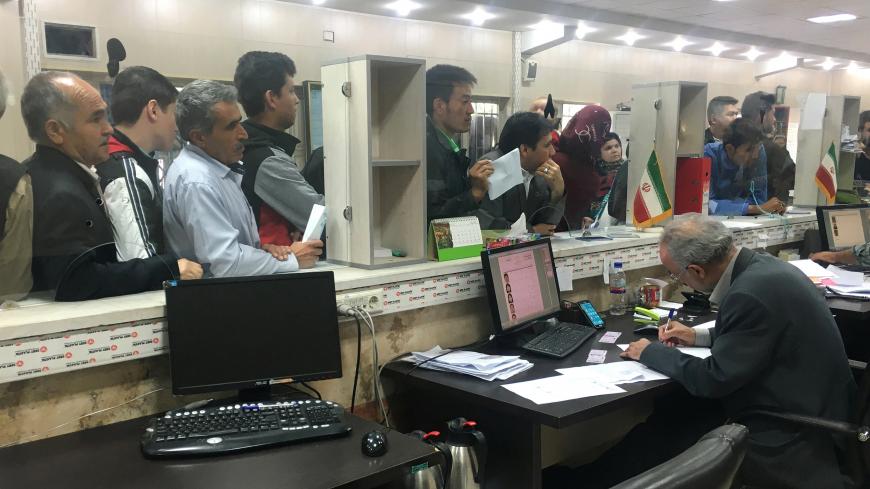 Afghans wait in line at the Soleimankhani center for refugees in Tehran, Oct. 24, 2016. - REUTERS/Gabriela Baczynska

Iranian Deputy Foreign Minister Abbas Araghchi has declared that Iran would consider asking Afghan refugees to leave the country if the United States continues to apply economic pressure in the aftermath of President Donald Trump’s withdrawal from the Joint Comprehensive Plan of Action (JCPOA) and promises to increase economic sanctions on the country. Subsequent statements by Iranian officials hinted that the Afghans would likely then look toward Europe for refuge.

In an interview on Iranian state television, Araghchi said, “For the last 40 years, we have accepted immigrants from Afghanistan. [Immigrants] have also come from other countries, such as Iraq and Azerbaijan, and whenever our neighbors faced problems, Iran accepted its brothers and sisters.”

Araghchi added, “Right now, more than 3 million Afghan citizens live in Iran, and according to some estimates they are holding more than 2 million jobs, and 3 or 4 billion euros leave our country, with those who make a living in Iran sending their money to their families in Afghanistan.”

Also according to Araghchi, there are more than 400,000 Afghans attending public schools in Iran, each costing the state 600 euros a year, and more than 23,000 college students, each costing 15,000 euros annually.

Araghchi said, “When American sanctions have an impact, and Iran’s financial resources are limited, and Iran’s oil exports become zero — which will not happen — we are forced to implement special policies for the economy, and it’s possible we will reach a point where we cannot continue paying these costs, and in that case, it’s possible that we will ask our Afghan brothers and sisters to leave Iran.”

Araghchi floating the idea of expelling refugees does not appear to have been spontaneous. He approached the interview well prepared with numbers and statistics, which suggests he anticipated publicly discussing the issue, perhaps with the expectation of the conversation reaching the ears of European officials.

The large number of refugees who have fled to Europe over the past few years, although far less than what Iran has absorbed, sparked a crisis on the continent. The prospect of millions of Afghan refugees also setting their sights on Europe's shores would almost assuredly get the Europeans’ attention.

Iranian officials appear to have decided to remind the Europeans of the sacrifices it has made that ultimately benefited them, suggesting that some reciprosity surrounding the nuclear deal might be in order.

In this vein, Heshmatollah Falahatpisheh, head of the parliament's National Security and Foreign Policy Commission tweeted, “3,000 young Iranians [security personnel] have been martyred to thwart the [westward] trafficking of 60% of Afghanistan's drugs [production] and 1 million migrants a year.… Europe's free-riding must come to an end.”

President Hassan Rouhani issued a similar warning in a letter to the other parties of the JCPOA about the necessity of keeping the nuclear deal alive and the cost Iran has incurred in fighting terrorism, drug smuggling and absorbing refugees. “We’re not asking you to take action for the interest of Iran,” Rouhani wrote, “but for the interest and future and your own country, you have a responsibility to act.”

Rouhani also asserted that Iran’s acceptance of refugees had prevented a “wave” of them from entering Europe. He called Iran “the biggest fort in the fight against drugs” and claimed that Iran has lost thousands of soldiers fighting drug smuggling on the border and through confiscation has prevented drugs from reaching Europe.

Conservatives criticized Araghchi's remarks as essentially suggesting that Afghan refugees could be asked to self-deport and asserted that such an idea demonstrates not only the failure of the JCPOA, Rouhani’s key foreign policy accomplishment, but also the administration’s inability to govern the country.