Intel: How Russia and Turkey are growing closer at US expense

The April 30 phone call between Russian President Vladimir Putin and Turkish President Recep Tayyip Erdogan covered a broad range of topics, from trade to military cooperation to Syria, as the two countries continue to grow closer amid US-Turkey tensions. 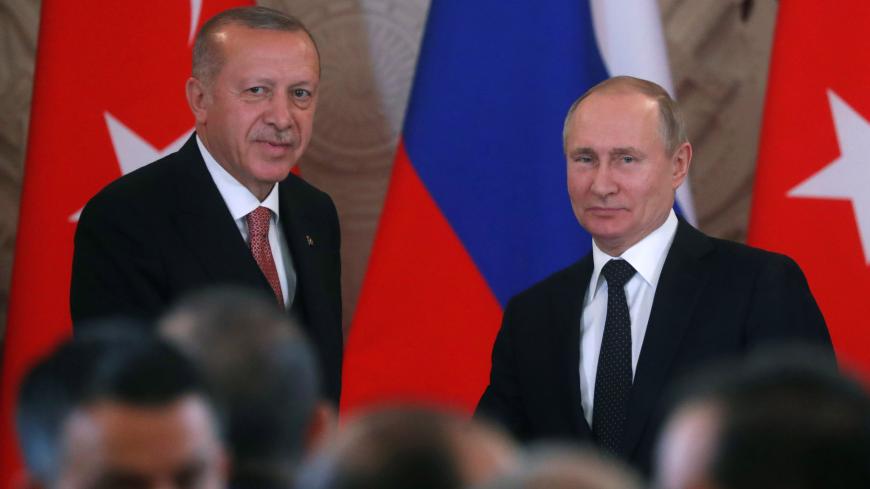 The April 30 phone call between Russian President Vladimir Putin and Turkish President Recep Tayyip Erdogan covered a broad range of topics, including trade, military cooperation and Syria, as the two countries continue to grow closer amid US-Turkey tensions. The two leaders endorsed the imminent launch of a constitutional committee for war-torn Syria — an issue Russia strongly promoted at recent talks in the Kazakh capital of Nur-Sultan — and agreed to continue “close coordination of efforts to stabilize the situation in Idlib.” According to the Kremlin, they also “spoke in favor” of achieving a cease-fire in Libya and resuming a political settlement process there under the UN aegis “as soon as possible.”

Why it matters: The tug of war between Russia and the United States over Turkey that has been going on for several years has acquired a new dimension with Moscow’s pending sale of the S-400 missile system to Ankara and the respective pushback on the deal from Washington. Putin’s latest conversation with Erdogan sheds light on Russia’s strategy for wooing the NATO member away from the United States.

Expanding the agenda: Moscow has sought to create a solid basis for its relationship with Ankara that would go beyond Syria with an extensive expansion of the agenda. More emphasis is being placed on a multitude of bilateral and regional issues, notably during Erdogan’s latest visit to Moscow.

Efforts to add Libya to the bilateral agenda are particularly noteworthy. Although Russia and Turkey are unlikely to forge a joint mediation team to broker a cease-fire as each party pursues its own course, the political message sent by sharing a common vision for the flaring conflict and solidarity over how to tackle it are more important to Putin and Erdogan at this stage.

As US-Turkey relations sour, Russia has also placed a premium on an intensive expansion of its relationship with Turkey, mostly through deeper military-technical cooperation.

"We have a number of joint projects to develop advanced aviation and helicopter-borne systems, component parts for armoгed vehicles, after-sales service for exported arms,” Alexander Mikheev, CEO of the JSC Rosoboronexport, said April 29. The Russian arms export agency has been under US sanctions for the past year. In the coming days, Rosoboronexport will be presenting some 300 types of weapons at the IDEF-2019 arms expo in Istanbul, where it hopes to sign some additional contracts with Turkish and other Middle Eastern entities.

What’s next: Regarding the rebel-held province of Idlib in northwestern Syria, the Putin-Erdogan conversation suggested the two agreed on “the need for effective measures to suppress terrorist groups [there].” This suggests Moscow will continue to carry out limited strikes on areas it deems under control of Hayat Tahrir al-Sham — largely considered to be an al-Qaeda affiliate — while pressuring Ankara on the need to deliver upon its own commitments under the Sochi memorandum signed in September 2018. A prospect for a larger offensive is still off the table.