A new photo book highlights the bleak reality of Istanbul's African community in terms of employment and discrimination. 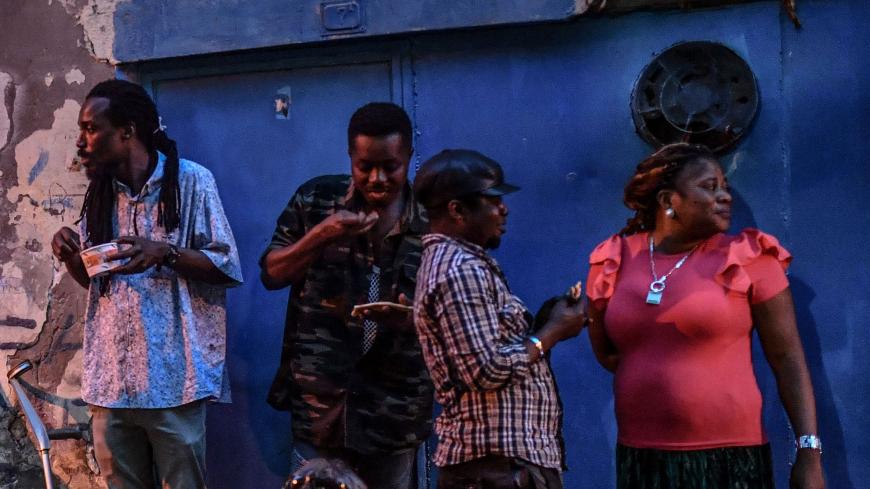 In Istanbul's Kumkapi neighborhood, where rows of weary historic buildings face the Marmara Sea, signs of the city's African communities are around every corner. A Nigerian restaurant here, an Ethiopian hairdresser there. Across town in the quarter of Ferikoy, soccer squads consisting of African players duke it out on a large pitch framed by a skyline of skyscrapers. Nearby in the Kurtulus neighborhood, an evangelical Christian church with an African congregation is tucked into a apartment building and only noticeable because of its sign.

Istanbul is home to as many as 150,000 people hailing from a number of African countries who have established communities throughout the city. However, they remain among the most disenfranchised groups in Istanbul, and are frequently associated with selling watches on the street. Sociologist Dogus Simsek and photographer Yusuf Sayman, via an ambitious effort gleaned from interviews with Africans from six countries and a variety of backgrounds, have taken aim at countering negative and one-dimensional perceptions held toward Africans residing in the city.

“Cabuk Cabuk: Africans in Istanbul” is a photo book with several chapters written by Simsek focusing on the economic, social and religious life of  various African communities in the city, followed by a wealth of lively, intimate photos shot by Sayman of people in their homes, workplaces, barbershops, clubs and elsewhere.

The book has been successful in attracting attention both domestically and abroad, and an exhibition featuring its photos was on display this month at Bina, a popular venue on the Anatolian side of Istanbul.

“Cabuk Cabuk” translates to "Hurry up!" in Turkish and is of the first phrases of the language that many African migrants learn as they are berated by their bosses to work faster. Grueling, low-paid jobs in makeshift basement textile factories are referred to as "cabuk cabuk" jobs.

The book “was prepared with the purpose of making these individuals' voices heard and increasing their visibility within society,” writes Simsek.

“The most visible African immigrants are the ones peddling goods on the streets, so the general perception is just that. The churches and other cultural activities are hidden from the general public, with almost no curiosity from the public to uncover,” Sayman told Al-Monitor.

“Most people are happy to tell their stories when you start some sort of trust, this was no different. I spent some time in churches — a great place to meet community — and built up contacts from there,” Sayman said.

Though many African communities have worked tirelessly to establish themselves economically and culturally in the relentless metropolis, life remains difficult. Church pastors have complained of harassment and attacks on congregants, to which police have responded with indifference. The most publicized issue regarding an African migrant in Istanbul was the 2007 killing of Festus Okey, a Nigerian who was shot and killed while in police custody after being detained for lack of ID. The officer who pulled the trigger was sentenced to just four years in prison in 2011, though the case was reopened at the end of last year.

Rampant racism remains a grim reality for Africans in Istanbul and women are subjected to regular sexual harassment and assault from their employers. The majority of Istanbul's Africans are Christian, and they face greater difficulties in terms of integration.

“Integration for Muslim Africans has been much easier as they have another in with the Turkish community, and the government gives more help,” Sayman said.

Near Kumkapi — probably the most diverse neighborhood in Istanbul — is the Laleli textile district, a multibillion dollar market centered around hundreds of stores where buyers from all over the world purchase clothing in bulk parcels to sell back home. The book emphasizes the prominence of the cargo trade in the economic life of Africans residing in Istanbul, and it is one industry where they can achieve upward mobility via becoming managers establishing their own businesses. Hairdressers, barbershops, restaurants and nightclubs catering to Africans provide additional means of employment.

Soccer and acting are “seen as ways out by the community,” according to Sayman, in terms of avoiding the grind of a low-paid manual labor job, though few are fortunate enough to achieve success in sports and entertainment. Many young and talented soccer players come to Turkey with dreams of playing for a professional squad, only to be swindled by managers for high fees, ending up stuck in Istanbul, broke and forced to take whatever work they can find.

Nevertheless, as the book describes, soccer remains an important mechanism of community bonding for players and spectators alike, with African teams regularly practicing and competing against each other in local tournaments.

“Cabuk Cabuk” does not gloss over the challenges, obstacles and frequently grim conditions that Africans live with in Istanbul. Instead it describes these hurdles and harsh realities in frank detail, while also portraying the diversity and resilience of the city's African communities, who have established themselves as permanent fixtures of Istanbul's economic and cultural life amid great odds.