Fasting Egyptians are branching out from traditional meals and exploring the efficient and affordable restaurants run by Syrian, Iraqi and other immigrants. 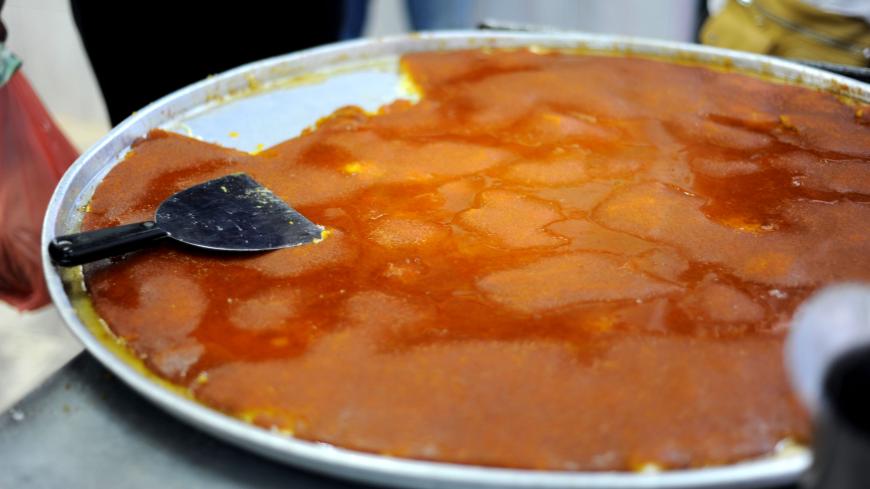 A popular Middle Eastern dessert called kanafeh is pictured at the market in the old city of Nablus, West Bank, Aug. 8, 2011. - Wikipedia/Guillaume Paumier

CAIRO — Hasan Sabri, a call center operator at an international company in Cairo, does not have the luxury of going home for iftar around 8 p.m. So he, like many of his colleagues, often ends up ordering food to end his daily fast. “If you want to have a meal delivered to your office or home to break your fast during Ramadan, Egyptian restaurants require you to place your order at least three hours before iftar,” he told Al-Monitor. “So I would rather order from a Syrian restaurant that delivers your meal in an hour. It is not only faster, but cheaper and better quality."

Sabri explained that at the beginning of Ramadan, he and his colleagues tried to order food from local Egyptian restaurants but were told that they had to place their order hours before sunset. So they tried one of the nearby Syrian restaurants and discovered that these small, often modest restaurants were not only more accommodating, but had better prices.

Sabri explained to Al-Monitor that he is now a regular customer of Cairo’s many Syrian eateries. “I prefer to take my family to the Syrian restaurants on my days off,” he told Al-Monitor. “They have excellent service and better food, although they can be very crowded."

Syrian and Iraqi restaurants began popping up in Egypt in the middle of the last decade in upscale areas such as Misr al-Gadida Street and al-Muhandiseen Street.

With the outbreak of the Syrian revolution in 2011 and the unrest in Iraq, however, the Syrian and Iraqi refugees who came to Cairo opened more modest restaurants in the working-class neighborhoods where they lived. Iraqi and Syrian restaurants also mushroomed in New Cairo, 6th of October and Sheikh Zayehd — all upscale new cities in Giza governorate.

They've been full all year around, even during Ramadan, when people often break their fast with traditional food.

While Egypt's most popular restaurants for iftar, such as Al-Prince of Imbaba — a working-class area in Greater Cairo — are still filled with customers, smaller Syrian restaurants on nearby Al-Moatamedia Street such as Al-Khair and Abou Ali, are also doing a brisk iftar business.

Hasan Suleiman, who lives in 6th of October City, told Al-Monitor that Syrian cuisine now tops the list of popular Middle Eastern restaurants. Iraqi food is also popular — along with Indian and Chinese, though those are somewhat unorthodox choices to break the fast. Suleiman said many of the restaurants are located in the city near Al-Hosary Mosque.

“The service is amazing and the food is tasty, all for very affordable prices,” Suleiman said.

The migrants' kitchens have introduced Egyptians to new dishes such as Syrian shwarma, Nablus kanafah and other sweets made with Syrian pistachios, Iraqi kubbeh and tashreeb. Egyptians' appetite for meat and chicken with vegetables make both Indian and Chinese cuisines attractive as well.

Mustafa Gaafar, a branch manager for an American restaurant chain in Cairo, told Al-Monitor that non-Egyptian kitchens have gained popularity in Egypt for two reasons. "First, they offer different and unfamiliar tastes. Second, they have low prices because most these restaurants operate in the informal economy, meaning they are not regulated by the state," he said.