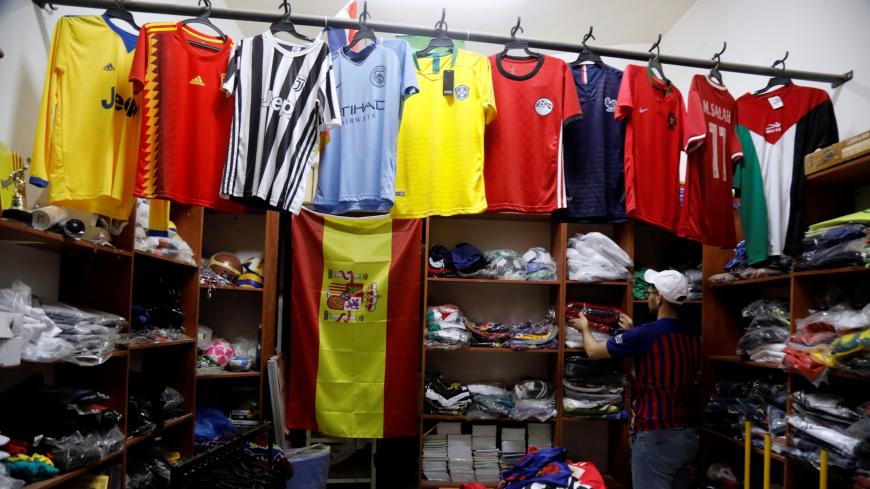 Some Palestinian businesspeople have been meeting with Israeli officials, to the dismay of some Palestinian officials. Here, a Palestinian salesman arranges sportswear in a shop, in Tubas in the Israeli-occupied West Bank, May 15, 2019. - REUTERS/Raneen Sawafta

While a political rupture between Palestinians and Israel has been continuing since 2014, when the Israeli government decided to suspend peace talks in response to a new unity agreement between rival Palestinian factions, it appears some Palestinian businessmen are flouting political taboos through ongoing economic ties with Israel.

On May 17, Palestinian businessmen met with officers of the Israeli military liaison service in the city of Jericho in the West Bank to discuss trade and economic issues.

Fatah issued a statement May 18 condemning the meeting as an act of disloyalty to Palestine and a form of treason. The Jericho Chamber of Commerce and Industry also criticized the meeting as one of Israel’s suspicious attempts to communicate with Palestinian businessmen and offering them trade incentives.

A source in the Ministry of National Economy in the West Bank, who preferred not to be named, told Al-Monitor that the “ministry had nothing to do with the meeting and rejected it. Other parties had organized it and we were not able to prevent them.”

Jabari said the gathering aimed to strengthen economic ties to achieve peace through the economy. Meanwhile, Yossi Dagan, head of the Samaria Regional Council, who also attended the dinner, announced an initiative for trade cooperation and the establishment of industrial zones and joint investments between the two sides.

“Under the Israeli occupation of the Palestinian territories, Palestinian merchants are forced to communicate with Israel to facilitate procedures in export and import, and to obtain permits and licenses,” Ghassan Khatib, a former minister of planning in Ramallah, told Al-Monitor.

“These kinds of meetings are not very welcome and it would be best to do without them, as they suggest economic dependence on Israel. Therefore, the Palestinian Authority is required to prepare a plan for an economic disengagement from Israel, which requires years to be achieved,” Khatib added.

The Palestinian Shehab News Agency reported May 19 that the head of the Israeli army's Coordination and Liaison Administration for Gaza, Col. Iyad Sarhan, held an iftar dinner at the Erez crossing in the northern Gaza Strip for the staff of the PA’s Palestinian Civil Affairs Authority based in Gaza.

The Palestinian media in the Gaza Strip criticized the meeting, issuing a statement May 21 titled “National Authority Against Treason,” saying they “refuse normalization and shared living with Israelis.”

Salih al-Zaq, a member of the Civil Affairs Authority, responded the same day, saying, “The meeting was held to introduce facilities in Gaza. This is a periodic meeting. We sat down with our Israeli military liaison counterparts and not with the Israeli military or political leadership. I informed Maj. Gen. Tawfiq Abu Naeem, director of Hamas security forces in Gaza, of the meeting and he said they had no objection.”

Atef Adwan, head of the Economic Commission of the Palestinian Legislative Council, told Al-Monitor, “Palestinian traders communicate with Israelis to facilitate their economic transactions and try to revitalize the market.”

“Authorities in Gaza turn a blind eye to these meetings as they help smooth the way for Palestinian economic activities. What is more dangerous than these gatherings are the Palestinian investments in Israel worth billions of dollars through businessmen associated with the PA,” Adwan said.

Through meetings with Israeli officers, Palestinians can obtain permits allowing them to enter Israel easily through the Ben Gurion Airport and pass through Israeli checkpoints in the West Bank instead of waiting in line for hours.

On Aug. 17, 2016, Israeli Defense Minister Avigdor Liberman unveiled the “carrot and stick” policy for the West Bank. “Its purpose is to continue to give benefits to those who desire coexistence with us and make life difficult for those who seek to harm Jews,” Liberman said. Under this policy, Israel seeks to contact Palestinian businessmen directly as a way to bypass the PA.

Also, in February 2017, Israel set up a website allowing Palestinians to get in direct contact with Israelis. On Jan. 3, the Palestinian Ministry of Civil Affairs called on Palestinians not to deal with Israel.

Nael Mousa, a professor of economics at An-Najah National University in Nablus, told Al-Monitor, “The goal behind [Israel’s meetings with Palestinians] is to grant wealthy businessmen seeking to take over the Palestinian political decision-making some leeway, and economic benefits, to consolidate the dependency on the Israeli economy. Israel is paving the way for the collapse of the PA and the implementation of economic peace. Israel will not give up control on the Palestinian economy given the cheap labor and the availability of raw materials.”

These economic dealings between the two sides are not something new. In June 2016, Israeli businessman Rami Levy established the first shopping center near Ramallah serving Israelis and Palestinians.

Also in June 2016, an Israeli-Palestinian meeting was held in Jericho in a bid to develop the industrial zone and promote joint trade in the city.