Economic relations between Israelis and Palestinians might be on their way to seeing improvement, but businessmen, mostly Palestinians, are still treading carefully. 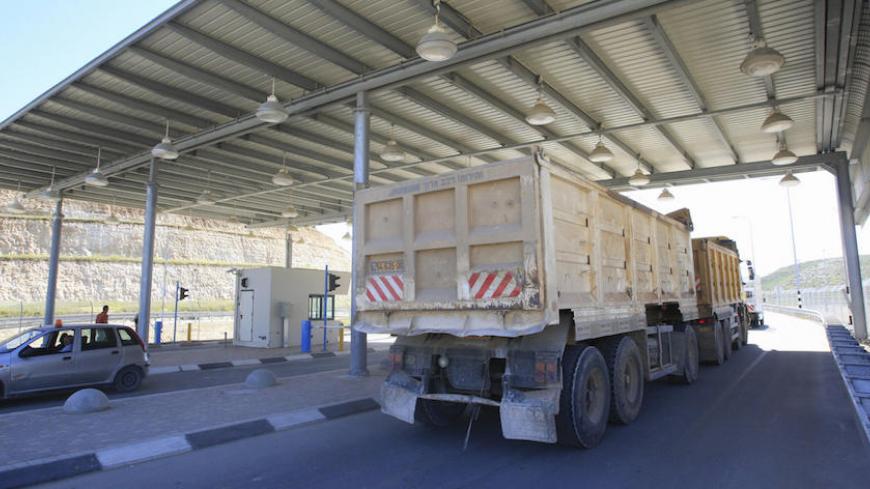 A lorry passes through the Israeli Tarqumiya checkpoint in the occupied West Bank near the town of Hebron, March 24, 2008. - MEHDI FEDOUACH/AFP/Getty Images

In an unprecedented event on Sept. 21, the first joint trade hall between Israelis and Palestinians opened near Ephraim crossing, the main crossing for the transfer of Israeli goods into the territory of the Palestinian Authority (PA). It is located near the cities of Tulkarm and Qalqilya, and it is one of the most important crossings between Israel and the PA through which 900 trucks pass every day.

The Israeli newspaper TheMarker published on Sept. 20 that the hall is run by the Israeli crossings authority, and it allows Israeli and Palestinian business owners to work together in a neutral place, without entering either the Palestinian territories or Israel. It is one of three halls to open in upcoming years.

The newspaper noted that the opening was attended by Israeli Deputy Minister of Regional Cooperation Ayoob Kara, Israeli business coordinator in the Palestinian territories Yoav Mordechai, head of the crossings authority in the Israeli Ministry of Defense Kamil Abu Roken, and Palestinian businessmen, whose names the newspaper did not mention.

“There had been economic activities between Palestinians and Israelis at frequent intervals, and the Israelis must understand that politics is linked to the economy, and any joint economic activity requires security facilities on their [Israel’s] part,” he added.

It seems noteworthy that the Israeli announcement of the opening of the joint trade hall with the Palestinians coincided with Mordechai’s statement on Sept. 9 about providing economic facilities in exchange for maintaining the security calm in the West Bank — including the approval on operating telecommunication services companies in the West Bank, activating the gas station in Jenin and licensing new industrial areas in Hebron and Qalqilya.

Speaking to Al-Monitor, Imad Rashid, a Palestinian businessman from the West Bank, refused to confirm whether he participated in the opening of the hall and noted that he supports “any economic activity that strengthens trade relations between the Palestinians and the Israelis, despite the political deadlock between the two, because we [Palestinians and Israelis] have failed to achieve comprehensive political peace, but it should not prevent us from achieving economic peace. However, should security tensions persist, they would hinder progress in the economic field.”

Al-Monitor examined the Palestinian press last week to follow up on the coverage of the joint trade hall opening and found that the press had largely ignored the event, perhaps out of a desire from media outlets to not promote such events among Palestinians.

A senior official at the Palestinian Ministry of Economy told Al-Monitor on condition of anonymity, “The PA does not have a direct influence on the Palestinian businessmen and traders on whether to participate in or boycott such economic activities. Each is responsible for their decision to participate or boycott, but the tumultuous political situation between Palestine and Israel and the clogged negotiations with the Israeli government are creating difficulties for the [Palestinian] private sector when it comes to engaging in business activities like these with its Israeli counterparts.”

Israel may be trying to compensate for the political deadlock with the Palestinians, and the lack of progress in the peace negotiations, by paying attention to the economic channel and encouraging joint ventures for the financial benefit of both sides, although there are sometimes objections by some Palestinians on the grounds that these projects come as part of the economic normalization through which Israel seeks to market itself in the region and the world.

In February, Israel and the PA signed a $1.2 billion agreement to provide Palestinians with natural gas for the next 20 years. However, major Palestinian popular pressure forced the PA to cancel the agreement in March based on the grounds that it supports the Israeli economy.

An academic conference, held Sept. 15 at Birzeit University in the West Bank, called for the need to boycott economic projects with Israel because they promote Israel to the world despite its occupation policy against Palestinians.

In this context, the director of Diyarona Real Estate and Development, Mohanad Rabi, told Al-Monitor, “Talk about the opening of the joint trade hall between the Palestinians and the Israelis came from the Israeli side that wants to market an untrue publicity that it wishes to make things easier for Palestinians and provide facilities, but these celebrations only aim to take souvenir photos to distribute them to media outlets.”

He added, “Despite Israel’s talks about economic activities with Palestinians, they do not offer economic facilities to them. However, Israel continuously creates commercial and investment obstacles for them and detains their goods in its ports for months."