How Israel is bypassing the PA

Israeli Coordinator of Government Activities in the Territories Gen. Yoav Mordechai launched a Facebook page that seems to assist the Palestinians with their daily struggles, but some Palestinians have accused it of having other goals. 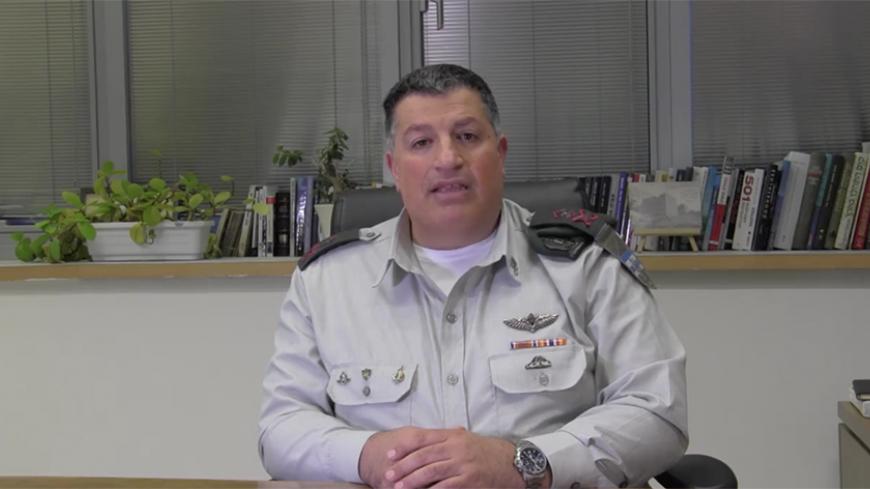 Israeli Coordinator of Government Activities in the Territories Gen. Yoav Mordechai is seen in a still from a video on his agency's Facebook page, March 28, 2016. - Facebook/@COGAT.ARABIC

Israel communicates with the Palestinians at the checkpoints and online. Examples of the latter are the Facebook page of Gen. Yoav Mordechai, the Israeli Coordinator of Government Activities in the Territories (COGAT), his Twitter account and his official website, which are visited by thousands of Palestinians daily.

On Nov. 11, the COGAT Facebook page posted about 10,000 job opportunities in Israel for Palestinian workers and listed the conditions required; it seems that this page has turned into an official Israeli platform to directly address the Palestinians.

The Facebook page was set up in March 2015, along with a phone number and an email address for Palestinians to communicate their requests. Over 72,000 people have liked the page and have interacted with its posts by commenting on the shared pictures and news.

In this context, Palestinian merchant Imad Ali from Jenin told Al-Monitor, “I had been trying to get a permit to enter Israel for business purposes for the past year, but the Palestinian Authority [PA] was stalling my request and asking for large sums of money to cover my permit fees. However a few weeks ago, I sent in my request in a message to the Coordinator page and I received my permit in less than 10 days.”

Mordechai became popular among Palestinians following his appointment in November 2013. He had been an Israeli army spokesman prior to that and served as the head of the civil administration in the West Bank, the head of the coordination and liaison administration for the Gaza Strip and was an Israeli intelligence officer. He speaks fluent Arabic, which allows him to thoroughly understand the Palestinian street.

Islam Shahwan, the former spokesman for the Palestinian Interior Ministry in Gaza and a security studies professor at Al-Awda University College in Gaza, told Al-Monitor, “The Coordinator page raises some security concerns among Palestinians because it is run by an Israeli general and has Israeli security purposes such as recruiting Palestinians into the Israeli intelligence by exploiting their humanitarian needs that include traveling, receiving medical treatment, education and work. This is particularly true because once a user likes the page, they would be allowing it access to their personal accounts. The security services in Gaza have proof that the page facilitates the treatment of sick Palestinians in Israeli hospitals, allows Palestinians to visit their parents in Arab areas in Israel and helps Palestinian merchants by giving them permits to pass through Israeli crossings.”

Israeli Defense Minister Avigdor Liberman announced Aug. 17 his desire to directly communicate with the Palestinians, without first going through the PA. This could indicate that the COGAT Facebook page is attempting to eliminate the PA’s tasks and cause the Palestinians to lose confidence in the PA. On Aug. 9, Mordechai had also announced a plan to gradually increase the number of work permits in the West Bank by 8,000.

On Oct. 31, the COGAT page posted news allowing the marketing of agricultural products from the north of the Jordan Valley to Israel, which will boost the Palestinian economy. On Oct. 26, the page posted an announcement of the expansion of the fishing zone — from six to nine nautical miles — on the shores of the Gaza Strip.

Khaled Safi, a Palestinian expert on new media, told Al-Monitor that the COGAT “page has an increase of followers of 4.2% every week. Its goal is to paint a civilized picture of Israel through its humanitarian role, illustrated in easing the situation for Palestinians. An Israeli team specializes in managing the page and takes less than 24 hours to respond to all posts and comments; according to Facebook, the page is very responsive. The page publishes different posts to show Israel’s point of view regarding several current events and appear civilized before international institutions.”

In this context, the page posted pictures of Israeli soldiers helping an elderly Palestinian man who was bitten by a scorpion in an olive field in the West Bank on Nov. 2. On Oct. 26, the page also reported that a Palestinian baby had been transferred from Gaza to a hospital in Hebron through the Erez crossing in northern Gaza to receive urgent treatment, although the crossings had been closed for the Jewish holidays.

Although many Palestinians have liked the page, some believe that many of those followers are fake accounts set up by the team managing the page to create an illusion that Palestinians follow and interact with the page, for others to be encouraged to join in and break the barrier between the Israelis and Palestinians.

In this regard, Hamas-affiliated Al-Majd website published a study about the Facebook page Oct. 31, indicating that Mordechai is one of the officers working within Israeli secret Unit 504, specialized in recruiting spies, and his page is a media cover to show a civilized image of Israel and a humanitarian side by lying to people. The study indicated that the page does not separate the Palestinian resistance from terrorism around the world and tries to lure Palestinians by taking advantage of their needs and helps them with their problems for intelligence purposes, such as the case of the merchant Ali.

Salameh Maarouf, the head of the government media office in Gaza, told Al-Monitor, “Palestinians follow the Coordinator page for many reasons, some out of curiosity — they are promoting it without knowing it. This page raises security concerns among Palestinians and some fear followers are affected by the Israeli propaganda on the page. In December 2015, we distributed a circular to journalists warning them about dealing with the page because it promotes the Israeli narrative regarding the events taking place in the Palestinian street.”

Al-Monitor followed the Facebook page during the first few days of November and noticed how it illustrates a humanitarian side by posting photos, for instance, of Israeli soldiers helping Palestinians in the West Bank, as well as statistics showing how Israelis are helping those in Gaza in the provision of water and helping Palestinian farmers pick olives.

What makes the page unique is that Mordechai’s statements are not the only posts shared. Photos and videos do most of the talking, which may indicate that the team administering the page is specialized in design, photography and montage; can respond in fluent Arabic; and is familiar with Palestinian special occasions, since it acknowledges Palestinians' celebrations.

A Palestinian expert on Israeli affairs, Saleh Naami, told Al-Monitor, “The Coordinator page is part of Israel’s attempt to address Palestinians directly. It offers news and reports to give the Israeli narrative more credibility."

It seems that the Facebook page is part of the battle between the conflicting Israeli and Palestinian narratives. Regardless of the limited services it provides to Palestinians, Mordechai’s face on the page is a constant reminder that Palestinians are communicating with an Israeli army general who may be behind their problems and suffering.