Turkey needs better ties with the United States and Europe to heal the ailing Turkish economy, but experts are not optimistic that Erdogan will do this. 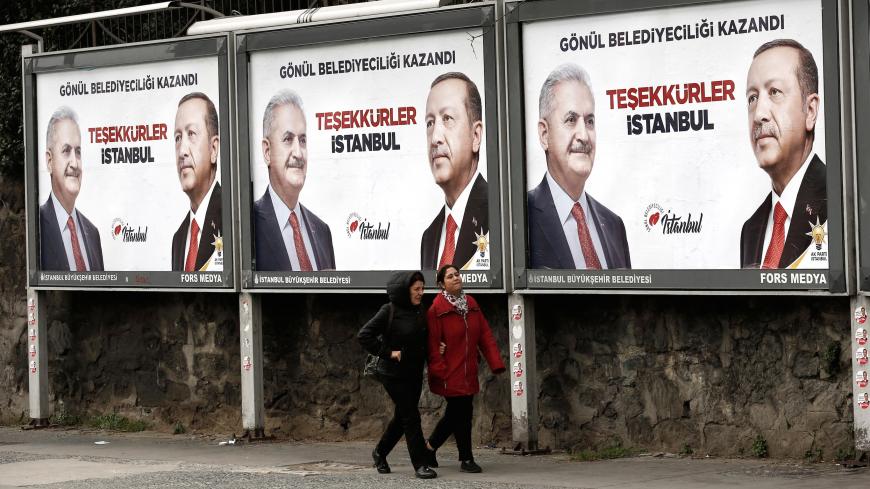 President Recep Tayyip Erdogan is trying to downplay the defeat his party suffered in Turkey’s local elections March 31 by pointing out that mayoral candidates from his Justice and Development Party (AKP) gained a plurality of votes nationwide.

Technically he is justified in saying that if general elections were held tomorrow, the AKP would win again.

“I offer my gratitude to those who made us the first party at the ballot box,” he told supporters he was addressing from the AKP’s headquarters in Ankara during the “balcony speech” he traditionally delivers following his electoral victories.

The picture this time, however, is more complicated than Erdogan would like to present.

These were not presidential or parliamentary elections, after all, but local elections that would not attract much international attention under normal circumstances.

It was Erdogan who turned them into a vote of confidence for his administration. Using the argument that these elections represented “a question of survival for Turkey,” Erdogan tried to convince the electorate that if the AKP lost it would spell doom for the country.

The language he employed as he campaigned on behalf of the AKP’s mayoral candidates was divisive and vitriolic. He even went so far as to accuse opposition candidates of behaving treasonously.

In addition to this, Erdogan used foreign policy issues liberally during his campaign, with equally acerbic language and bitter barbs aimed at the West and Turkey’s regional rivals. He clearly expected to garner Islamist and ultranationalist votes in this way.

The 44.1% of the overall vote that AKP candidates received to the 30% for the main opposition Republican People’s Party (CHP) may appear to be a victory for Erdogan at first glance.

But it is a Pyrrhic victory that can’t shroud the fact that he lost all of Turkey’s major cities, including Ankara, Istanbul, Izmir, Antalya and Adana to the opposition.

Erdogan may get the bulk of support that keeps him in power from the conservative Anatolian heartland and the crowded fringes of metropolitan centers, but it is ultimately the major cities that act as Turkey’s political, economic and cultural locomotives.

Erdogan knows this all too well, having started his political career as the mayor of Istanbul; he is now experiencing the bitter taste of defeat for the first time since his AKP came to power in 2002.

His bellicose tactics in the lead-up to the elections failed to provide the results he hoped for. As a result, Erdogan did not get the solid vote of confidence he needed in order to achieve his political goals before the next presidential elections are held in four years.

Erdogan has major plans for 2023, the centennial of the Turkish Republic, and clearly intends to govern beyond that date. That, however, does not appear as certain now as it may have before the local elections.

Political analysts Murat Yetkin said Erdogan failed in his tactic of trying to scare the electorate into voting for the AKP by arguing the elections represented a question of survival for Turkey.

“Opinion polls showed that economic problems such as the increasing cost of living and rising unemployment were the most important issues for 80% of the people proved to be correct,” Yetkin wrote in his Yetkin Report blog.

The state of the economy, in turn, has much to do with Ankara’s foreign policy orientation, which in recent years has reflected Erdogan’s combative Islamist/ultranationalist outlook, especially when it comes to relations with the West.

Western countries are still among the major investors in Turkey, while Europe continues to provide the greatest market for Turkish goods. There is, therefore, a direct correlation, economists say, between Turkey’s deteriorating relations with the United States and Europe and the worsening of its economy.

Turkey’s weakness in this regard became apparent during last year’s crisis with the United States over the jailing of the American pastor Andrew Brunson by Turkey on terrorism charges.

Ankara eventually submitted to pressures from Washington and released Brunson after the United States slapped sanctions and punitive tariffs on Turkey. These punitive measures saw an already weak Turkish lira go into a free fall against the dollar overnight.

Serious problems with the United States remain on the table and could affect the economy negatively in the coming period if not resolved. Turkey faces the prospect of more US sanctions, for example, if it insists on going ahead with the purchase of Russian made S-400 anti-ballistic missile systems, which Washington and Ankara’s other NATO allies oppose.

How Ankara manages this issue — which may also cost it the delivery of state-of-the-art F-35 fighter jets that the Turkish air force was planning to rely on for the next 10 years — will clearly have an impact on Turkey’s economy.

Many analysts agree that putting Turkey on a sound footing again economically will require a restoration of confidence in Turkey in the West.

Retired Ambassador Suha Umar underlined that countries such as Turkey that are dependent on foreign capital have no choice but to try and inspire confidence among foreign investors.

“If the economic management of the country is based on the whims of one person you can’t expect confidence or money,” Umar told Al-Monitor.

The question now is whether Erdogan will connect the dots and move away from the abrasive approach he has been using in international affairs.

During his balcony speech on election night, he conceded begrudgingly that mistakes had been made. “Starting from tomorrow morning we are going to determine what our shortcomings were and start work to correct these,” Erdogan said.

Pointing out that the country will not have any elections until 2023, he added that his government would concentrate domestically and internationally during this period on ways to take Turkey forward as a modern and contemporary country.

“We will struggle to resolve all the problems our country is facing on the basis of a reformist understanding,” Erdogan said.

It is not clear, though, if Erdogan is willing or able to change tack politically in a radical way in order to fix the broken ties with the West for the sake of Turkey’s economy.

Expert opinion remains skeptical on this score. In a jointly penned article on the subject, retired ambassadors Ali Tuygan and Yusuf Buluc underlined that Turkey’s relations with the West now stand at a critical point after the local elections.

“The fundamental question now is if the AKP leadership will read the results of the local elections as a yellow card and draw the necessary conclusions,” they wrote. “Sadly, its record doesn’t inspire any optimism,” they concluded.

Referring to Erdogan, Umar said, “The person in charge is not able to see the connection between the need for better ties with the West and the state of the economy.”

“He is focused on the trees and fails to see the forest as a whole, and therefore can’t see that everything in the forest is interconnected,” Umar said.

Pointing to Syria as an example, Umar underlined that “the mistakes made in Syria have cost Turkey, by the government’s own admission, over $40 billion, mainly with regard to the refugee problem.”

He also pointed to the expensive military operations Ankara was forced to launch in northern Syria because of the government’s misreading of developing situations in this crisis.

“All of these mistakes have come at a high financial cost for the country,” Umar said.

“I don’t believe [Erdogan] can reverse the picture and move in a more realistic and politically productive direction, because this would leave him facing the question of his own political survival,” Umar said.