The irreparable setback Turkey’s president suffered in the March 31 municipal polls, coupled with the country’s economic crisis, leaves him in a weaker position vis-a-vis Washington, Moscow and the European Union. 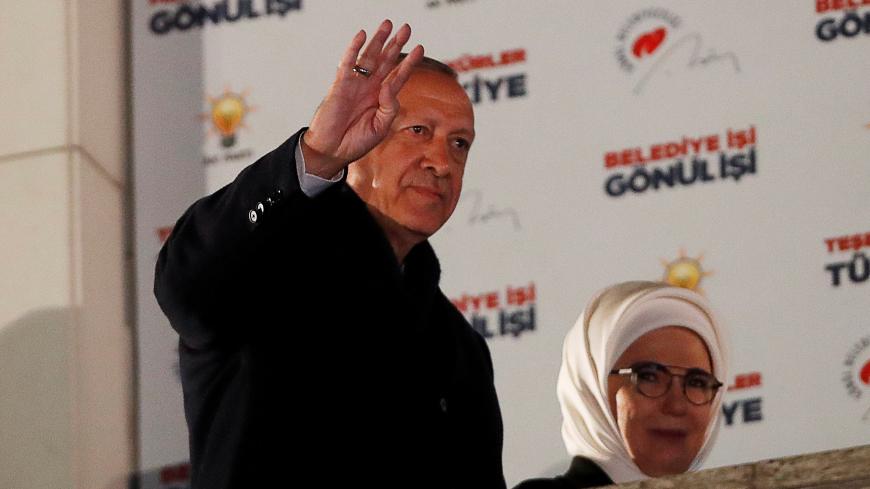 About a month ago, while campaigning for Turkey’s March 31 local polls, President Recep Tayyip Erdogan stressed that “separating domestic and foreign policy is impossible” and that “domestic policy shapes foreign policy anywhere in the world.” In further remarks at the March 2 rally in Trabzon, he said, “The more our country grew stronger at home, the more it grew stronger and gained respect abroad over the past 17 years. The more the Turkish economy grew, the more influence Turkish diplomats gained. The more Turkish democracy advanced, the more Turkey’s say in foreign affairs increased.”

Before getting to the point, let’s use our liberty to construe Erdogan’s words and note that what he means by “our country” and “Turkish democracy” is his own rule since 2002.

In the local polls, Erdogan lost hold of Turkey’s most important city, Istanbul, the capital, Ankara, and all other big urban centers except Bursa. The fundamental meaning of this loss was described by Erdogan himself in his Trabzon speech. “Every move, every achievement of ours in domestic politics and — I underline — every election victory of ours has had very positive repercussions abroad,” he said.

The statement points to one crucial reality: The political clout derived from election victories was of significant help to Erdogan and then-Foreign Minister Ahmet Davutoglu as the pair moved Turkish foreign policy away from its institutional trajectory and put it on an increasingly Islamist and anti-Western track from 2009 onward. Deserving a special mention in this regard are the 2010 constitutional referendum, which the government won with 58% of the vote, and the general elections the following year, in which Erdogan’s Justice and Development Party mustered a record 50% of the vote.

By all measures, Erdogan proved highly successful in projecting the political might bestowed on him by elections onto his foreign policy, both in its takeoff and collapse stages. His international perception as “Turkey’s strongman” proved instrumental in his ties with the West and Middle Eastern affairs. And from the moment his foreign policy spiraled into deadlock, the broad voter base and the cult of personality he had built at home gave him a sound resistance ground to hold onto in the face of mounting challenges.

During the anti-government Gezi Park protests in 2013 — the turning point when his international image was irrevocably tarnished, only to continue worsening ever since — Erdogan issued a memorable threat to his opponents demonstrating in the streets. “I am hardly restraining [my] 50% at home,” he said June 4, 2013, referring to his voter base. The fact that he made the remarks in response to questions by a Reuters reporter ahead of a foreign tour comprising Morocco, Tunisia and Algeria was neither coincidental nor independent from his foreign policy.

Since Erdogan believes that “every election victory has had very positive repercussions abroad,” the same logic dictates that his defeat in the local polls is now expected to cause negative repercussions for him on the international scene.

Indeed, Erdogan has suffered a big power loss and the world has immediately discerned it. Second, the world has also seen the rise of a democratic resistance to Erdogan’s authoritarian rule — a resistance that remains committed to expressing itself at the ballot box. The recognition of this fact is expected to turn up external pressures on Erdogan, especially in ties with the United States.

Turkish-US ties are already on a collision course over Ankara’s insistence on buying S-400 air defense systems from Russia. With the two NATO allies heading toward a “perfect storm,” US sanctions appear inevitable if Turkey proceeds with acquiring and deploying the S-400s. The 2017 Countering America’s Adversaries Through Sanctions Act authorizes President Donald Trump to impose various sanctions on countries that purchase significant weapons from Russia and relevant Russian officials and organizations.

Twelve types of sanctions are available under the act, including blocking the targeted country’s access to international financial institutions such as the International Monetary Fund. Should Turkey receive delivery of the S-400s in midsummer, as announced, it would face the risk of being slapped with at least five of the sanctions under the act, depending on Trump's decision-making.

Apart from the sanctions, the S-400 deployment would halt the delivery of F-35 jets to Turkey, a co-producer of the new-generation stealth fighter, over concerns that the radars of the Russian air defense systems could compromise the technology secrets of the aircraft. In a first step to that effect, Washington announced April 1, the day after the local elections, the suspension of equipment deliveries to Turkey related to its purchase of the F-35s.

Clearly, US decision-makers waited for the elections to pass to make the move — timing that can hardly be explained with any other reason but to prevent Erdogan from using the suspension as election fodder fanning anti-American sentiment.

It is not hard to predict that Erdogan’s defeat in the local polls will embolden his adversaries in the Trump administration and other US institutions, encouraging them to be more assertive in pushing sanction against Ankara. The likely hardening of positions is also expected to exacerbate the impact of the open-ended economic crisis Turkey is going through.

Indeed, Erdogan’s election defeat could push him to seek closer relations with Moscow. Nevertheless, one could easily guess that if Turkey loses the maneuvering room that traditionally has come from by balancing relations between Russia and the United States, Erdogan’s ties with Moscow would be akin to a hostage situation.

Incidentally, the news that Russian President Vladimir Putin congratulated Erdogan for his election “success” might afflict one with a temporary loss of touch with reality.

Still, one should keep in mind that Putin might have helped Erdogan duck a bigger defeat. The Sochi deal the two leaders reached in September 2017 on Syria’s rebel-held province of Idlib has long proven to be a failure, but a Russian-backed Syrian offensive on the al-Qaeda-linked Hayat Tahrir al-Sham in the region has thus far been deferred, which cannot be explained without factoring in Turkey’s political calendar. The launch of an offensive prior to the March 31 polls and its potential side effects on Turkey could have led to larger electoral losses for Erdogan’s government.

In light of these timing considerations, the likelihood of an offensive on Idlib has now increased. At the same time, Ankara is likely to step up its pursuit of a military operation against the Syrian Kurdish People’s Protection Units — which Turkey sees as an offshoot of the Kurdistan Workers Party, a designated terrorist group — in a bid to push Erdogan's election defeat out of focus. In a campaign speech a day before the elections, Erdogan said, “The first thing after the elections will be to resolve the Syrian issue — on the ground rather than at the [negotiating] table, if possible.” This was not for nothing — he was well aware he was up for a bad outcome from the polls.

Finally, the specter of a crisis with the United States, coupled with the economic turmoil, raises the importance of ties with Europe for Ankara. Anticipation is now likely to build in the European Union and other major European actors that pressure on a weakened Erdogan could begin to yield results.