The Erdogan government is more determined than ever to purchase the S-400 missile systems from Russia, further eroding Turkey's standing as a Western ally. 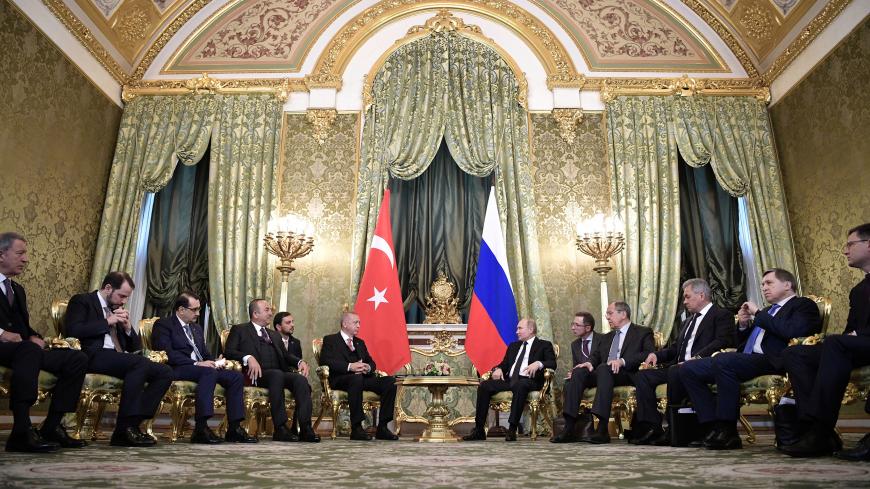 President Recep Tayyip Erdogan visited Moscow on his first trip abroad after the March 31 elections and, on the flight back home, told journalists traveling with him that the delivery of the Russian S-400 air defense systems to Turkey could occur sooner than July, as scheduled.

No crisis between Turkey and the Western alliance has been as predictable as the one over the S-400s. It’s because US sanctions mechanisms against countries that purchase significant weaponry from Russia cannot be stopped; once Turkey receives the strategic S-400 air defense systems, the sanctions will be activated.

Turkey would be subject to penalties under the 2017 Countering America’s Adversaries Through Sanctions Act, in addition to a separate measures that would bar it from receiving F-35 stealth fighters as part of a joint production program, in which it is both a coproducer and buyer. The worries over Turkey’s acquisition of both the F-35s and the S-400s stem from the risk that the radars of the Russian systems could compromise the “stealth” capabilities of the fifth-generation fighter. Thus, a country’s simultaneous possession of the F-35 jets and the S-400 systems is seen as unacceptable in terms of the security of the F-35 project.

The Turkish public perceives the S-400 crisis as a bilateral issue between Ankara and Washington. But if the security of the F-35 project is at stake, the issue goes beyond the United States, the principal manufacturer of the jet, meaning that other coproducers and buyers could have a potential problem with Turkey as well. Australia, Canada, Denmark, Italy, the Netherlands, Norway and the United Kingdom are the other coproducers of the costly aircraft, whose prices range from $90 million to $115 million, depending on the model. Israel, Japan and South Korea are buyers through direct military sales, with Finland and Belgium also considering purchasing the jet to modernize their existing air fleets.

Turkey’s removal from the F-35 program over the S-400 row would bear on all countries mentioned above due to the hitches that are likely to occur in the production of the aircraft. Its purchase of the Russian systems would trigger a chain reaction of side effects.

Ultimately, in July, the crisis in Turkish-American ties would enter a course that would be hard to reverse should the S-400s be delivered as scheduled. An abrupt escalation in the crisis could come even before July if the deployment happens sooner, as Erdogan suggested.

In a sign of how much negative energy the crisis has generated, US Vice President Mike Pence slammed Turkey as “reckless” during an April 4 gathering in Washington marking NATO’s 70th anniversary. “Turkey must choose,” he said. “Does it want to remain a critical partner in the most successful military alliance in history, or does it want to risk the security of that partnership by making such reckless decisions that undermine our alliance?”

Absent a rapid solution, the S-400 crisis will go beyond being the main dynamic of the general deterioration in ties with the West that Turkey has experienced under the Justice and Development Party, largely because of its own foreign policy choices. This historic crisis, which epitomizes Turkey’s break with Western geopolitics, could open the floodgates of sleeping dynamics against Turkey in conflicts that are currently on the back burner.

A case in point is Turkey’s relationship with Greece. Although the two neighbors’ longstanding disputes in the Aegean and Cyprus appear frozen at present, there is a dawning prospect that the military balance could be upset, to Turkey’s detriment, on the level of air forces. In a signal to that effect — and at a time when the F-35 transfer to Turkey is effectively on hold — Vice Adm. Mathias Winter, head of the Pentagon’s F-35 office, told Congress April 4 that sales of the jet could be expanded to five new countries, including Turkey’s Aegean rival Greece, along with Singapore, Spain, Romania and Poland. Greek Defense Minister Evangelos Apostolakis confirmed that possibility the following day.

Turkey’s decision to buy the S-400s was driven not only by its close relationship with Russia but also its resentment and mistrust toward the United States. Ankara is incensed that Fethullah Gulen, whom it sees as the leader of the botched coup attempt in 2016, and his supporters have remained free in their activities in the United States. For Ankara, this is flouting the spirit of the alliance. Similarly, the US armament of the People’s Protection Units — the Syrian branch of the separatist Kurdistan Workers Party, which Turkey considers a terrorist group and has fought for more than four decades — has stoked anger in Ankara, no matter how Washington justifies the move.

This mood in Ankara, however, is unlikely to help Turkey in the current circumstances. The S-400 deployment plan — a strategic step toward breaking up with the geopolitics of the Western alliance — coincides with a critical moment, as the world sees Erdogan’s government emerging weaker from the March 31 local polls and grappling with a deepening economic crisis.

Ankara’s loss of economic and political might, on the one hand, and its audacious move to deploy the S-400 systems, on the other, could provoke Western capitals to turn against Turkey. Should they conclude that Turkey cares little about damaging its ties with the Western alliance, even in such difficult times, Western capitals could feel they are now free to act on certain moves they had avoided in the past so as to avoid harming ties with Turkey.

French President Emmanuel Macron has already offered a case in point. On April 10, he signed a decision that recognized April 24 as “Armenian genocide commemoration day.” On the same day, Italian lawmakers approved a motion calling on the government to recognize the 1915 Ottoman massacres of Armenians as “genocide.” Ankara reacted furiously to both moves but was unable to stop them.

Anti-Turkey sentiments are hardening in the US Congress as well. Last week, Sens. Bob Menendez, D-N.J., and Marco Rubio, R-Fla., introduced a bill to lift the arms embargo on the Republic of Cyprus, which Turkey does not recognize, and authorize the Donald Trump administration to enter into energy cooperation agreements between Cyprus, Greece and Israel.