Saudi Arabia and the United Arab Emirates are on the hook for a $299 million billing error for aerial refueling. 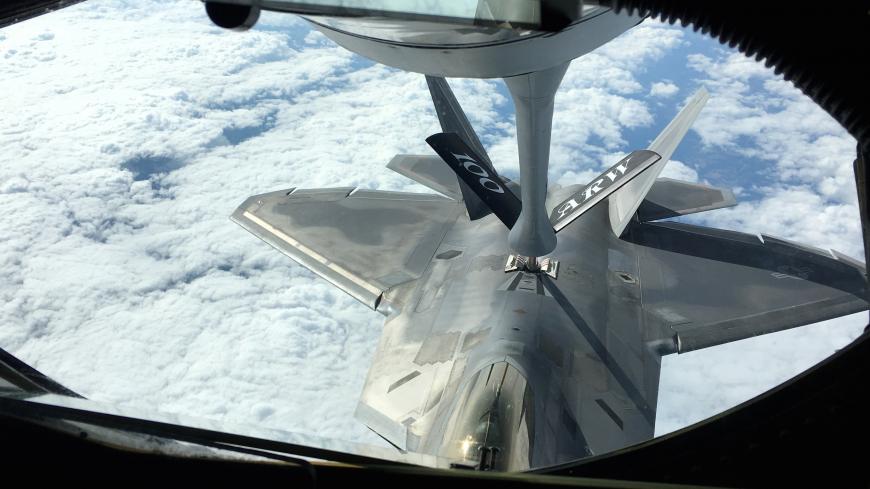 The Saudi-led coalition fighting in Yemen has begun paying back the United States for nearly $300 million in refueling support that took place over three years, Al-Monitor has learned. The refueling support was canceled by the Donald Trump administration late last year.

Just days after President Trump vetoed a congressional resolution to cut off US military assistance in Yemen, the Pentagon said the United States has received its first payments after notifying the coalition of the billing error in December. The Department of Defense is seeking $299 million for the refueling effort against the Iran-backed Houthis, which the resolution said amounted to US engagement in "hostilities."

The Pentagon adjusted the total owed by the Saudi-led military grouping down from $331 million after a review “to ensure there was no faulty, duplicative or incomplete billing,” Rebarich said. She added that the Defense Department is still working to provide final costs to Saudi Arabia and the United Arab Emirates.

News of the initial repayments is unlikely to stop pushback from Congress as lawmakers look to mount another bid to halt US support to the coalition in the deadly conflict, which the UN says has killed more than 233,000 Yemenis.

“I’m glad they’re finally paying us, but I still want to understand how it happened that we were providing them the service and not being paid, and seemingly not caring about it,” said Rep. Tom Malinowski, D-N.J., who was an assistant secretary of state during the Barack Obama administration when the refueling campaign began in 2015. “I’d love to know how US taxpayers were bilked for that amount of money by some of the wealthiest countries in the world. Makes absolutely no sense to me.”

Bills for the terminated Pentagon mission cover both the cost of the fuel provided to Saudi Arabia and the United Arab Emirates and the hours of travel for US flights to and from the battlefield, which the Pentagon previously failed to charge.

The United Arab Emirates has now fully reimbursed the US for the UAE's share of the operation, including $103 million in flight hours and $15 million for refueling, a Senate aide told Al-Monitor. The aide said Saudi Arabia is expected to reimburse $158 million for the cost of US flights in the coming weeks, adding that the Pentagon has yet to bill the Saudis for the full $23 million in refueling costs. The Saudi embassy in Washington DC did not respond to Al-Monitor's request for comment.

The Senate is set to vote Thursday to try to override Trump’s veto of the war powers resolution from 2020 presidential candidate Bernie Sanders, I-Vt. The Senate passed the measure 54-46 last month, more than a dozen votes short of the two-thirds majority needed to override a presidential veto.

"Being frank, it’s a tough lift to get 13 more Republicans to vote for this. But now that we are dealing with separation of powers, I think we will be able to get a few more,” a Sanders aide told Al-Monitor. “Even leaving Yemen aside, you’re talking about a very foundational issue of Congress’ authority. There are other tools, very directly denying funding, denying any new arms transfers. All options are on the table."

Though backers acknowledge this week’s vote is a long shot, the Senate is also considering bipartisan legislation to cut off non-defensive weapons sales to Saudi Arabia and slap mandatory sanctions on officials allegedly involved in the murder of Saudi journalist Jamal Khashoggi in Turkey.

The United States still provides intelligence to the Saudi-led coalition, but is legally barred from resuming refueling after the State Department failed to certify that Saudi Arabia and the UAE had made a “good faith” attempt to reduce civilian casualties, Al-Monitor first reported in February. Menendez has also held up a sale of more than 120,000 precision-guided weapons to Saudi Arabia and the UAE since May 2018.

At the request of Rhode Island Sen. Jack Reed, the top Democrat on the Senate’s Armed Services panel, Congress has also demanded that the Pentagon provide a global accounting of efforts to refuel Saudi and Emirati jets over Yemen. Reed’s provision in last year’s annual defense bill also bars the Pentagon from passing goods to unauthorized third parties under the bilateral deals. Saudi Arabia received US fuel through the UAE for the first year of the conflict, according to a Pentagon letter reported by The Atlantic in November.

In a report sent to lawmakers in January and obtained by Al-Monitor, the Defense Department said it has 118 reimbursable country-by-country deals to provide food, ammunition, fuel and other services to foreign militaries; this provided $861 million to foreign forces in 2018. The Pentagon expects to provide $5 million to Saudi Arabia and $3 million to the UAE under that authority this year, according to the report.

The Trump administration is also conducting internal oversight into the Yemen refueling campaign. The Pentagon’s inspector general canceled an audit into the military’s reimbursement process in the Middle East and Africa last month, saying it would represent an "inefficient use of resources," but the Government Accountability Office and the Air Force Audit Agency are still investigating the matter.

Marta Hernandez, a spokeswoman for the Senate Armed Services Committee, said the panel had been made aware that the inspector general inquiry was closed. But the cancelation of the audit may not comfort experts and Congress, who are still skeptical that the Pentagon’s math is accurate.

“Did Congress ever get key questions answered regarding refueling reimbursement?” asked Bradley Bowman, a former national security adviser to Sen. Todd Young, R-Ind., a critic of the Saudi-led war. “It is not unreasonable for American taxpayers to wonder whether the United States has been appropriately reimbursed by wealthy security partners.”

Clarification: May 1, 2019. This story has been updated to clarify the findings of the congressional resolution on Yemen.