Russia is tacitly stepping up its efforts to engage with the UAE in Yemen and reach out to the Southern Transitional Council, which favors the reestablishment of an independent South Yemen. 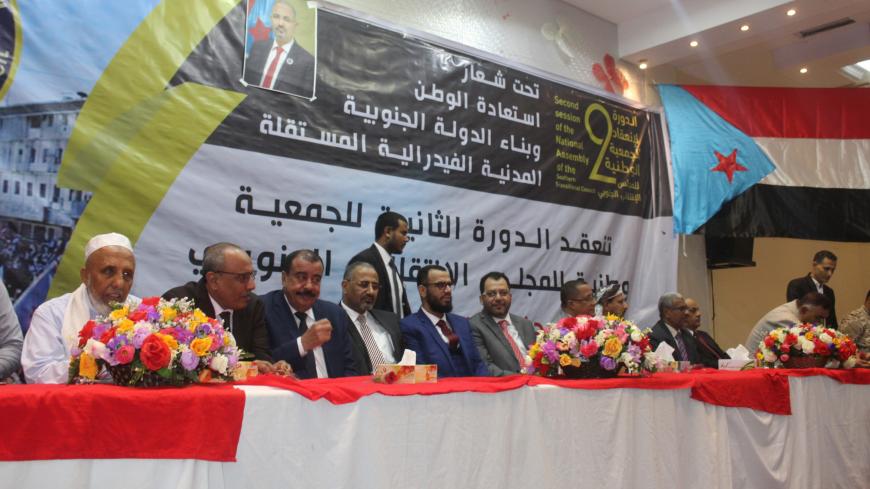 Russia’s Foreign Minister Sergey Lavrov toured Egypt and Jordan from April 5 to 7. Lavrov raised the issue of the war in Yemen and its reconciliation process, among other issues, with Egyptian colleagues. At a press conference with Egyptian Foreign Minister Sameh Shoukry, Lavrov reiterated Russia’s support for the Stockholm agreement on Yemen.

“In general, the cease-fire is observed, although it has been broken several times," Lavrov said. "The sides accuse each other of initiating violence. Moreover, the sides have failed to separate forces in the Hodeidah region. However, we expect the UN mission formed specifically for the resolution in Hodeidah, as well as the UN special envoy for Yemen Martin Griffiths, to continue their work. As with any other conflict, here the only way to achieve peace is for the Yemenis themselves to find an agreement. Any external party able to influence various local groups should encourage them to negotiate instead of provoking violence.”

Although Syria and Libya rank higher on the scale of Russian foreign policy priorities than the conflict in Yemen, Moscow has recently demonstrated its willingness to intensify work on the Yemeni track to help the parties in conflict find solutions to end the war. At the same time, given Russia’s long history of relations with Yemen, Moscow is also pursuing its own interests in the country. For this reason, Moscow both maintains existing contacts with the opposing parties and has worked toward establishing new ones.

Recently, Aidarus al-Zoubaidi, the president of the so-called Southern Transitional Council (STC), and Said bin Breik, the head of the structure’s National Assembly, took a trip to Moscow upon the invitation of the Russian Foreign Ministry. The STC was created in Aden in May 2017 under the patronage of the United Arab Emirates. Its strategic objective is to recreate the independent nation of South Yemen within the 1990 borders of the People’s Democratic Republic of Yemen. The STC relies on the so-called Southern Resistance militant groups, which were trained and equipped by the UAE.

It is noteworthy that Zoubaidi’s trip to Moscow coincided with Russian Ambassador to Yemen Vladimir Dedushkin's trip to Aden, a central city in South Yemen where the Russian Consulate is supposed to be reopened shortly. The consulate may represent Russia to South Yemen institutions, especially the STC, which controls most of Aden and numerous southern areas, refusing to be subordinate to the government of Yemeni President Abed Rabbo Mansour Hadi. Thus, Moscow has established full-fledged relations with the STC, which is progressively taking on the role of a “third power” due to UAE support.

Moreover, Moscow’s historical connections with South Yemen, which go back to the Soviet era, have played a significant role in the dialogue with the STC. The People’s Democratic Republic of Yemen, established in 1967, existed until 1990, when it merged with the Yemen Arab Republic. It became the first Marxist socialist nation in the Arab world exclusively oriented toward the Soviet Union and the Eastern Bloc. A number of high-level officials from the STC and affiliated structures used to study in the USSR.

At the same time, Russia maintains trusting relations with the Hadi government. The new stage of this partnership was launched by Yemeni Foreign Minister Abd al-Malik al-Mekhlafi's visit to Russia in January 2018. Previously, Moscow’s most optimistic expectations for Yemen involved the former president of Yemen, Ali Abdullah Saleh, who was viewed as a figure who could be accepted by all parties. However, his murder in December 2017 at the hands of his former allies, the Houthi movement, also known as Ansar Allah, disrupted Russia’s plans on the Yemeni track. Though contacts and communications with the Houthis were retained, Moscow closed its diplomatic mission in Sanaa, significantly distancing itself from the Houthis, and began closely cooperating with Hadi and his supporters — the Saudi-led coalition of nations.

At the same time, policymakers in Moscow came to realize that Hadi was hardly influential enough to make the Yemeni resolution process succeed, whereas Saudi Arabia was gradually losing its leadership in the anti-Houthi coalition in favor of its Emirati allies, who now play a major role in the military campaigns, the outcomes of which are often dependent on Abu Dhabi’s involvement.

In this context, Russia's contacts with the STC, a structure involved in turbulent relations with Hadi — sometimes in direct armed confrontation — also prove the UAE’s leading role in the conflict, considering that Abu Dhabi in particular allowed the STC to evolve into a viable political structure and develop ambitious plans to reconstruct an independent state of South Yemen. Basically, the militant groups affiliated with the STC, together with the Emirati troops, were the factions that determined the outcome of the battle for Hodeidah, forcing the Houthis to negotiate and make concessions in Stockholm for the first time since the beginning of the conflict. Moreover, Moscow appreciates the secular nature of South Yemeni factions, which also stems from the UAE’s preference toward secular groups as allies. Meanwhile, Saudi Arabia and President Hadi have to place their bets on the Yemeni Muslim Brotherhood movement, al-Islah, as well as miscellaneous Salafi groups.

Russia's support for factions under Abu Dhabi’s patronage is also connected to the general context of Russian-Emirati relations. The UAE is gradually becoming Russia’s major Middle Eastern partner, and the two countries are frequently finding they share similar positions on many regional issues. For instance, the Gulf country recently reopened its diplomatic mission in Damascus, proving its willingness to take steps to return legitimacy to the Syrian regime. Russia, for its part, demonstrates its efforts to support the UAE's allies more intensively, such as Gen. Khalifa Hifter in Libya. Russia’s readiness to cooperate with the STC, yet another UAE ally, is one more indication of this pattern.

According to certain sources, Russian private military companies have already started to work in South Yemen. It is quite possible that they were invited there by the UAE, which is known to hire various foreign mercenaries to operate in southern regions of Yemen, where terrorist groups such as al-Qaeda and the Islamic State still operate.

At the same time, Moscow contemplates the profits to be gained from a resolution in Yemen. Currently, Russia provides Yemen with large amounts of grain. Yemen is the 10th largest importer of Russian grain and products derived from grain. From July 1, 2018, to Feb. 29, 2019, Yemen has purchased 953,000 tons of grain, 19% more than during the same period from 2017-2018.

Russia’s interests in Yemen are not limited to economic aspects, which go beyond grain exports and include military-technical cooperation, oil production and railway construction. Russia may benefit from resurrecting the plan to construct a military base on Socotra Island. Initially proposed decades ago by the Soviet military authorities, the plan was never implemented. Currently, the UAE is the most influential actor on the island — a fact that has already caused a diplomatic controversy between President Hadi and Abu Dhabi.

The STC and the UAE also control other places where military bases could be established, such as the strategically important shores of the Bab el Mandeb and Aden straits. Bab el Mandeb is a passage for global navigation as well as a popular site for naval bases. The United States, France, China, the UAE and even Japan all have naval bases in neighboring Djibouti. Thus, in regard to the Yemeni track, it is crucial for Russia to maintain and develop contacts with the UAE and the STC. It's likely that the STC will not only retain its de facto authority over South Yemen, but also legitimize it.