Palestinian Authority wary of Hamas intentions toward the US

The idea that Hamas could deal directly with Washington stirs the Palestinian Authority’s fear of being replaced by the movement. 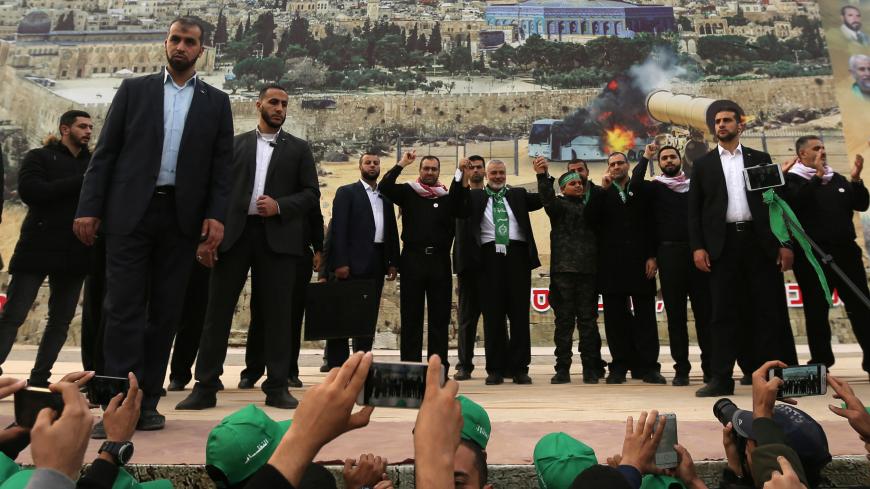 A senior Hamas official's statement that the movement is open to talking with Americans has provoked angry reactions among members of the Palestinian Authority (PA), which accuses Hamas of trying to bypass the PA by establishing dialogue with Washington.

The Palestinian media didn't cover the statement until March 30, almost a month after Hamas leader Ghazi Hamad told Fox News in a Feb. 26 interview, “We are open to talk to the Americans, to the Europeans, to anyone, to discuss our cause and to talk about everything.”

The United States designated Hamas a foreign terrorist organization in 1997 and still deals with the group as such.

The negative reaction comes amid heightened tension between Hamas and its rival faction Fatah after protests March 14-15 in the Hamas-run Gaza Strip against poor living conditions. Hamas violently cracked down on these protests and was harshly criticized by Fatah leaders, including PA President Mahmoud Abbas.

On March 31, Hamad issued a statement saying he had not mentioned Donald Trump's administration. Instead, he explained, he had said Hamas is willing to meet with Americans and Europeans in general.

Hamad lashed out at the Trump's administration as “blindly biased toward the [Israeli] occupation and systematically acting against the legitimate rights of the Palestinian people.”

Al-Monitor spoke with Ahmed Youssef, a former political adviser to the head of Hamas' political bureau and the head of Beit al-Hikma, a nongovernmental organization that conveys the Palestinian cause to the world through training seminars, workshops and conferences.

“Hamad's statements are reasonable. Hamas must have channels of communication in Washington, the world's greatest power. This aims to prevent Hamas’ enemies from influencing the US political quarters and tarnishing its image in front of the Americans,” Youssef said. “It's necessary for Hamas to maintain communication with the US, whether under the reign of Trump or any other president. Hamas should clarify its positions to fight against the negative stereotypes.”

On Dec. 6, Washington submitted to the United Nations a draft resolution condemning Hamas’ activities in Gaza and its rocket attacks against Israel.

Hamad's statement is, nonetheless, in line with Hamas’ updated founding charter issued in May 2017. The charter states, “In its relations with world nations and peoples, Hamas believes in the values of cooperation, justice, freedom and respect of the will of the people.” It adds, “Hamas welcomes the stances of states, organizations and institutions that support the rights of the Palestinian people. … At the same time, it denounces the support granted by any party to the Zionist [Israel].”

The charter makes no mention of the United States. This seems to imply a consensus among members not to object to a meeting with Washington aimed at improving Hamas’ international image.

Hasan Youssef, a Hamas leader in the West Bank, reasserted to Palestinian news website al-Modon on March 31 that Hamas doesn't object to meeting any US official, even Trump himself, despite the latter's bias toward Israel. He noted, however, that the aim of such a meeting would be to convey the Palestinian version of the conflict with Israel.

Meanwhile, PLO Executive Committee member Ahmad Majdalani, who is close to Abbas, told Al-Monitor, “Hamas’ desire to open a dialogue with the US is not surprising. The movement sees itself as an alternative to the Palestinian leadership. Hamad's statements aim to pave the way for the 'deal of the century,' [an as-yet unveiled US peace proposal]. This proves our convictions that Hamas is a party to this deal. Hamas is a pragmatic organization, it has flexible political positions, and does not oppose the rapprochement with Washington.”

Hamas, however, has vehemently opposed the peace plan, which it expects will strongly favor Israel.

Azzam al-Ahmad, a member of the Fatah Central Committee and the PLO Executive Committee, also claims Hamas wants to become a recognized alternative of the PLO, but he said in an April 1 interview with Palestine TV that the PLO was and will remain the sole legitimate representative of the Palestinian people.

Mahmoud Abu al-Haija, editor-in-chief of PA daily newspaper al-Hayat al-Jadida, argued in an April 1 story on Fatah’s official website that the Trump administration doesn't really want a dialogue with Hamas, but is just looking for tools to execute its peace plan.

Fatah deputy head Mahmoud al-Aloul also commented on Hamad’s statement. In a March 31 interview with Palestine TV, he wondered if Hamas would consecrate US policy and the proposed deal. “Will Hamas remain silent on the annihilation of the Palestinian cause and agree to be part of the deal of the century?” Aloul asked.

But Bassem Naim, a former health minister and member of Hamas' international relations office, told Al-Monitor, “Hamas has met several times in past years with former US President Jimmy Carter, former congressmen and former US officials in Gaza, Damascus and Doha." He added, "International research institutions have relayed US inquiries to Hamas about its position on Israel, and Hamas sent back its answers. The movement didn't always ask the Americans for a meeting [each time], but sometimes the Americans would express such a wish."

"The PA doesn't have to be so hysterical about our meetings with the Americans," Naim said.

Yet Hamas seems to be inclined to talk to the Americans instead of having to go through a third party, the PA, based on the idea that it would be better if the United States hears directly from Hamas, rather than hear about it from others.

“Trump’s administration is anti-Palestinian. Hamas could enter into dialogue with the US if [Hamas] commits to renouncing violence and recognizing Israel,” Masri told Al-Monitor. “The PA rejects any Hamas-US rapprochement for fear Hamas would act as its substitute in Washington. Hamas is militarily strong and politically pragmatic, and this plays in its favor.”

Hamas sees itself as an influential Palestinian and regional movement entitled to present its stances to the United States and to clarify its perceptions of Israel, the peace process and relations with the international community.

Israel, which wants Hamas to remain on the terrorist list, could hinder Hamas efforts to communicate with the United States. The PA could also hamper these efforts. The PA refuses to compete with Hamas on leading the Palestinian national project and speaking to the United States on behalf of the Palestinians. Hamas could be required to step up its efforts to overcome these obstacles.