Trump 'deal of the century' still no deal for Palestinians

With the unveiling of the Donald Trump administration's peace plan, Palestinian leaders have reiterate their categorical rejection of it, certain that it fulfills none of their demands toward statehood. 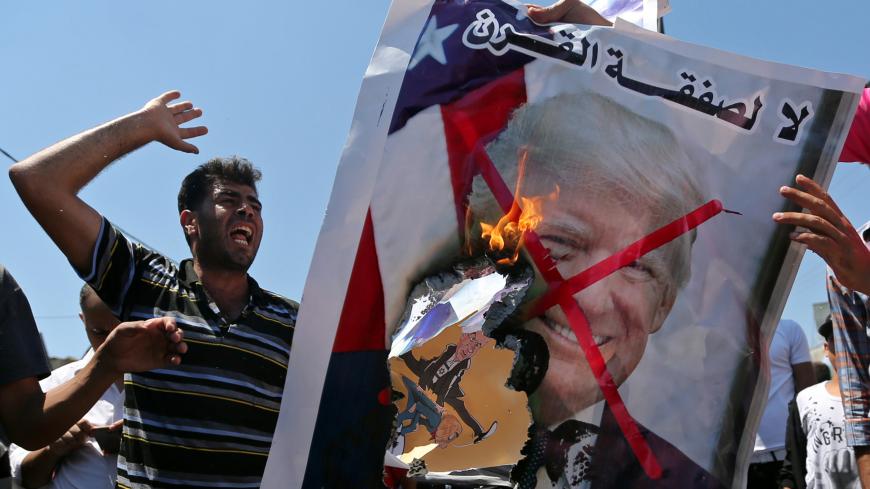 After Israeli Channel 13 reported Jan. 23 that the Donald Trump administration would reveal its plan for Middle East peace, Palestinian leaders reiterated their rejection of the so-called deal of the century even before learning of the details.

In the lead up to elections in Israel scheduled for March 2, Trump invited Israeli Prime Minister Benjamin Netanyahu and his political rival Benny Gantz, leader of Blue and White, to visit the White House Jan. 28 for details and unveiling of the deal. With Palestinians publicly rejecting the proposal even before its public presentation, approval of it at some later date appears unlikely and will deepen the current rupture with Washington. According to recent media reports, Abbas is refusing to take Trump's calls.

On Jan. 15 in Ramallah, Fatah deputy leader Mahmoud al-Aloul had said in a meeting with members of the international press that the Palestinian leadership still has no specifics about the plan's proposals, but nonetheless feels certain that it neither includes the establishment of a Palestinian state, East Jerusalem as the capital of that state or the right of return for refugees. For these reasons, he said, the Palestinian leadership will oppose the plan.

On Dec. 19 Palestinian President Mahmoud Abbas had told Fatah’s Revolutionary Council of his rejection of Trump's deal and of the tremendous pressure he was under by the United States to accept it. Abbas has consistently refused to communicate with Trump’s representative to discuss the plan's details despite the negative consequences he stands to suffer.

In a Jan. 23 press statement, Hamas spokesperson Hazem Qassem pledged that his organization would foil any deal. Khalil al-Haya, a top Hamas official, had said at a Jan. 16 press conference that on a recent tour of capitals, Hamas' political bureau chief, Ismail Haniyeh, had sought to raise awareness about the threat that the US proposal poses to the Palestinian cause.

One reason the Palestinians oppose Trump's proposal is the belief that it will render the cantonization of the West Bank permanent. Instead of Israeli exploitation of the territories through overt occupation, the deal would uphold the status quo in the West Bank with areas remaining under Israeli military and security control and Palestinian civil administration. It would also strike the Palestinian presence in Jerusalem and maintain Gaza’s isolation and the blockade against it.

Wasel Abu Yousef, a member of the PLO's Executive Committee, told Al-Monitor, “The implementation of the deal began before its declaration, when the US declared Jerusalem to be the capital of Israel in December 2017, moved its embassy there in May 2018 and declared Israeli settlements legal in November 2019. It is therefore not surprising that the Palestinians reject the deal without even knowing its details.”

He further stated, “At best, it would give us limited self-rule rather than an independent state. We initially rejected the deal, and we are aware of the repercussions. Even if withdrawals from Palestinian areas take place, they will only give rise to a Palestinian state lacking sovereignty and will maintain Israel’s occupation of most West Bank areas.”

Palestinians view the timing surrounding the presentation of the peace proposal, ahead of Israeli elections, as part of the Trump administration's support for the Netanyahu-led right in Israel, given their strategic political alliance. Palestinians also envision the deal as backing Israel’s intention to annex Jewish settlements on the West Bank, including in the Jordan Valley, designate the West Bank and Gaza as the territory of a transitional state, New Palestine, and grant Palestinians limited administrative powers.

Mahmoud Mardawi, with Hamas’ National Relations Office, told Al-Monitor, “If Israel wants to withdraw from part of the West Bank without the Palestinians’ signed approval of the deal, the resistance will take advantage of this without facilitating an Israeli move or participating in it. It is inconceivable to stand in the way of Israel’s retreat from an area. Even if the Palestinians have not signed the deal or made commitments to the US and Israel, nothing stops them from benefiting from the potential outcome of the deal.”

Emad Abu Awad, a researcher at the Istanbul-based Vision for Political Development, told Al-Monitor, “The declaration of the deal of the century will put Palestinians, whether Hamas or the [PLO], in a quandary. The [PLO] will not be able to make serious decisions against the deal, save for condemning it, which might push a current within Fatah to revolt against the official leadership and demand that it take serious stances. Hamas is also in a pickle, as its organizational presence is limited in the West Bank, and in Gaza it cannot take a stand regarding the deal. Add to this that Hamas will not jeopardize its understandings with Israel aimed at improving the situation in Gaza. The Palestinians’ stances will not technically affect the deal, as relations between the PA and Hamas are tense, and each will work single-handedly toward a response.”

Trump took office in 2017 promising the “deal of the century,” and as his deal has been unfolded, the Palestinians have had no serious public reactions to it, except for expressions of anger and condemnation. This is unlikely to change after the proposal's unveiling although its presentation could pave the way for implementation through US-Israeli agreement without the Palestinians' consent, imposing the deal as a fait accompli as with the US actions on Jerusalem and the settlements and suspension of US financial assistance.