As AKP loses big cities, has Erdogan overplayed his hand?

In an interview with Al-Monitor, American social anthropologist Jenny White describes the challenges that lie ahead for the abashed ruling party and the triumphant opposition after Turkey's electoral upset. 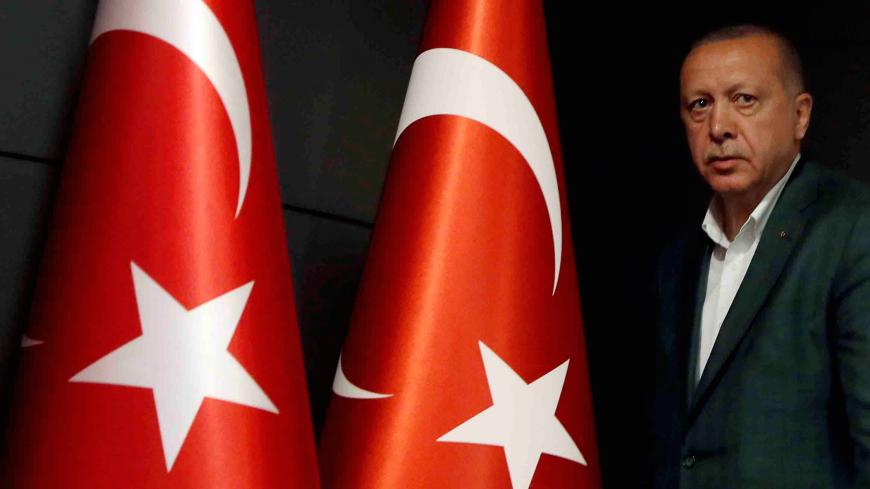 The aftershocks of the political earthquake triggered by Sunday’s municipal elections in Turkey that saw the ruling Justice and Development Party (AKP) lose key cities to the main opposition continue to reverberate with some AKP candidates refusing to formally concede defeat, notably in the country’s commercial powerhouse Istanbul.

But few believe the country’s President Recep Tayyip Erdogan will risk unleashing a wave of popular protests that would further destabilize the economy, whose lagging performance was seen as a key factor driving the opposition's hefty gains.

Indeed, formal appeals lodged by AKP officials ahead of a 3 p.m. deadline for registering complaints in Istanbul and elsewhere are seen as more of a diversionary tactic aimed at covering up the extent of the popular rebuke as Erdogan ponders his new strategy. The AKP is focused on some 30,000 spoiled ballots in Istanbul and is demanding a recount on the grounds they may include ones marked clearly in their favor. But barring last-minute shenanigans, the 20,000-vote lead commanded by Ekrem Imamoglu, the main opposition Republican People’s Party (CHP) candidate who has claimed victory, is unlikely to be dented.

Striking a conciliatory tone, AKP spokesman Omer Celik clearly signaled that his party would not kick up a fight in a press conference last night. “It is our duty to defend the right of every citizen who cast their vote. So it is not possible for us to pursue undeserved victory,” Celik said. “We don’t recognize any power over the national will.”

For now, Erdogan has pledged to make the economy his priority with a slew of new structural reforms. He’s alluded to his party’s mistakes and there is talk of a Cabinet reshuffle aimed at restoring market confidence. But it remains unclear whether he will match his words with action.

Alarmingly, Erdogan renewed vows to move against US-backed Kurdish militants controlling Syria’s northern border with Turkey to the east of the Euphrates River during the same post-election speech delivered at the AKP’s Ankara headquarters on Sunday. The threats have been largely seen as more rhetoric to drum up nationalist votes. But a new operation could yet prove to be the real diversionary tactic to shift attention from increased economic hardship, though it would likely exacerbate it.

Ankara’s frosty relations with Washington were heading toward sub-zero levels yesterday after the Pentagon suspended delivery of equipment related to F-35 fighter jet production until Turkey scotches its order of Russia’s S-400 Triumf missile system. The embattled Turkish lira fell by 2% on the US announcement that it was suspending “deliveries and activities associated with the jet’s operational capability.” Who knows what further fallout would ensue from a unilateral Turkish move against the US-protected zone in Syria.

Meanwhile, in no way does the opposition’s success after decades of inertia and internal squabbles guarantee that it will be able to sustain it once in office. Imamoglu’s unifying and moderate tone has raised hopes that he will not submit to potential pressure from hard-liners to engage in cultural revanchism by reintroducing alchohol to all municipality-run social spaces, for example. And he seems to have the full backing of CHP leader Kemal Kilicdaroglu, once written off as an ineffectual suit but now credited with picking Imamoglu and forging winning tactical alliances with nationalists and Kurds alike. Either way, the AKP-dominated Turkish media is likely to swoop in on their tiniest missteps.

As pundits continue to ponder these questions, Al-Monitor turned to Jenny White, a prominent American social anthropologist who has studied the AKP and authored several groundbreaking books based on years of living in AKP-run lower income neighborhoods in Istanbul.

In the following highlights from the interview, which has been edited for clarity, White describes the challenges that lie ahead for the AKP and CHP opposition alike.

Al-Monitor:  How important is Istanbul to the AKP?

White:  Istanbul is crucial to the AKP for two reasons: It has symbolic value as the center of Ottoman power and home to the sultans, with whom Erdogan identifies himself and his regime. It is the turbine that generates the revenue AKP needs to feed its political and business networks. Erdogan's star rose in part because he controlled and exploited Istanbul's financial and symbolic capital. He also fixed the infrastructure, picked up the garbage, fixed roads, expanded public transport and improved health care and social services. He did something that people valued. Voters surely asked themselves, would the CHP have built a subway?

Al-Monitor:  Is the AKP still the social movement that it was in its early days or has it ossified into a typical Turkish political party? Do you see a potential for fragmentation as a result of Sunday’s big losses?

White:  The AKP is not a coherent movement and hasn't been for some years. But your question about fragmentation applies to the CHP as well. No matter what the AKP's fate is, it will be what the CHP does (or doesn't) do that will make the difference.

The CHP was known even among its own constituents as a party tangled in infighting and lacking new ideas. The CHP now has an opportunity to turn a local victory into a new national reputation as the party to count on for prosperity and security. To do that, the leopard has to change its spots. The CHP has to reward good leadership, not see it as a threat. Attract talent and listen to it, build it in like Erdogan's team — a group of experts that went everywhere with him when he was mayor. Make a specific plan — not lovely generalities — about how it will tackle the major issues: environment, economy, security, migrants, etc.  Make it public, get feedback from experts and the public. Be the party for all — the new CHP mayors paid lip service to that, at least.

Al-Monitor:  Is the CHP up to all of that?

White:  The danger, like after the last election, is that the CHP will become dysfunctional due to struggles over leadership and push out its own talent for this reason, or do nothing. One of my informants called the AKP the Yap (the doers) and CHP the Yapma (don’t do) party.

Al-Monitor:  Clearly the AKP will do its share in ensuring the CHP fails?

White:  There are several outside forces that can derail the CHP. The AKP sucks resources and equipment out of CHP-won municipalities, leaving them unable to do much. That would be especially dangerous in this bad economic climate. Then there are divided loyalties among contractors and government agencies on which municipalities and internal AKP supporters, like municipal employees, rely. The result would be that CHP mayors are stymied and undermined from without and within.

Getting back to your question about whether the AKP remains a social movement or not, in my book “Islamist Mobilization” I describe how the women working for the success of the Welfare Party [the AKP’s precursor party] thought that they were part of a social movement. Once the Welfare Party consolidated its power, the women realized that they had no seat at the decision-making table. The fact that followers think it's a movement doesn't mean that the party has any desire to mobilize the population beyond getting its votes and obedience.

Al-Monitor:  Can we say that Erdogan’s successful formula of conflating Islamism with Turkish nationalism, which you describe in your book on the topic, has run out of steam?

White:  Note that I didn't call it “Islamist Nationalism.” I have always argued that the AKP is not and was not an Islamist party, defined as a party that makes policy through an Islamic lens and with an Islamic rationale, often in an attempt to change the state to make it more hospitable to Islam by, e.g., imposing Islamic law. The AKP is not inspired by any particular theology or Islamic ideology.

Al-Monitor:  But Erdogan uses a lot of religious symbolism, draws on Islamic texts in his speeches. He did that in Sunday’s speech.

White:  Many though not all AKP leaders are personally pious, but that doesn't make them Islamists. The AKP uses Islam as a political tool to gain the loyalty of voters by playing on their feeling of oppression and exclusion under the Kemalists. Since these days half the population is under 30, many voters have no experience of "Kemalist oppression" and feel free to find the present regime oppressive in its heavy-handed and often openly manipulative insertion of Islam into seemingly every aspect of their lives. The AKP also uses Islam to control the population by spinning conspiracy theories about Muslims under threat, for example showing the Christchurch videos in Erdogan’s election speeches, a technique borrowed from the Kemalist playbook that warned that Turks were under threat by evil outsiders. It is this difference — Turkish national identity is presented as Muslim, rather than racially Turkish — that makes Muslim nationalism different from Turkish nationalism. Added to that is the current sense that national history is rooted in Ottoman greatness, rather than some military adventures in World War I by a man named Mustafa Kemal Ataturk. None of this has changed as a result of the elections. Indeed, it's become naturalized so that even secular Turks are hiring Ottoman costumes for their weddings.

Al-Monitor:  How would you then describe the current AKP? Does it risk fracturing?

White:  Stripping away the Islamist modifier leaves the AKP as nothing more than a political party led by a very wily politician who seems to have overplayed his hand. It has no Muslim magic wand. Indeed, the AKP has long since begun to fracture as Erdogan has pushed out advisers and politicians close to him for perceived disloyalty to his plans. Turkish political leadership is not about rallying people around an idea or plan, but about personal loyalty and obedience to the leader. That makes parties brittle because the chance of disagreement by any given follower is great, especially those close to the leader who might have their own ideas. Disagreement becomes a personal affront, which in Turkey slides easily into accusations of treason. Treason against the person is treason against the state. What results is continual polarization and fracturing of political parties. I hope that this election cycle will be different and that the leopards will change their spots. Otherwise, it's not a culture war we will see, but a no-holds-barred war between self-styled heroic figures competing over loyalty and rewards. Culture will simply be the handle by which the jug is cast to the ground.