A recount in the Istanbul mayor's race has seen opposition candidate Ekrem Imamoglu's lead fall from 23,000 to 21,500 over Binali Yildirim of the ruling Justice and Development Party; Imamoglu and others fear the electoral council might tamper with the results. 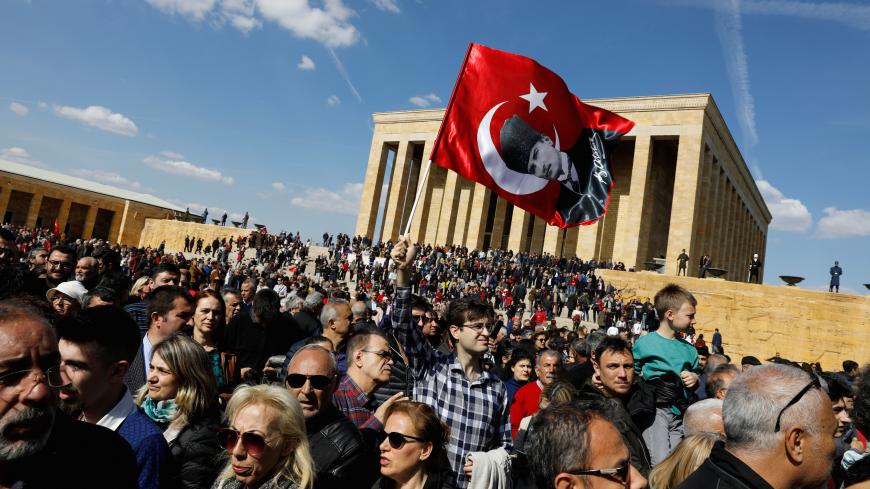 ANKARA, Turkey — The candidate who came in first in the initial results of the Istanbul municipal elections has appealed to electoral authorities to confirm him as the city’s mayor, warning that the extended recount, now in its third day, could lead to unrest.

Ekrem Imamoglu, the candidate of the opposition alliance, was ahead of the ruling party’s Binali Yildirim by 23,000 votes in Sunday’s election when the Supreme Electoral Council announced that all ballots had been counted on Tuesday morning. The result dealt a severe blow to President Recep Tayyip Erdogan as he is a former mayor of Istanbul and had campaigned heavily in what is the biggest city in Turkey.

Yildirim promptly applied to the electoral council for a recount, pointing out that the number of invalidated votes, 319,000, was more than 10 times the winning margin.

The electoral council ordered a recount of the votes in 18 districts, with council Chairman Sadi Guven saying they would focus on invalidated votes.

By Wednesday, the recount had raised the total number of votes for both candidates, but had narrowed the gap to 21,500.

Opposition supporters, pining for a change of administration after 25 years of rule by Erdogan and his Justice and Development Party (AKP) and its predecessors, were clicking on to election websites every few hours to see whether the figures had changed.

Imamoglu called a press conference and urged the electoral council to recognize his victory without further delay. He also appealed to the president to “contribute to the process to prevent the results in Istanbul, which are being watched by the whole world, from dragging [Turkey] into worrisome atmospheres,” The Associated Press reported.

In a surprising gesture, Imamoglu produced a photograph of a celebratory party when Erdogan was elected Istanbul mayor in 1994. The picture showed an Erdogan rival in that election attending the party. Imamoglu asked the president to demonstrate similar goodwill now.

Yildirim responded by telling the press that Imamoglu should respect the recount process.

“Istanbul's citizens have decided by themselves [on a mayor] and this decision will be announced by the Supreme Electoral Council," he said, adding he expected the outcome within a few days.

In the meantime, "I will safeguard these votes," Yildirim added.

His statement suggested he was using his influence as a person who was prime minister until June of last year and who has Erdogan’s ear. Technically, the votes are the property of the electoral council; they are not in the custody of either candidate.

On Sunday night, election-watchers sat on the edges of their seats as TV screens refreshed the Istanbul results every 10 to 15 minutes. With less than 3% of the ballot boxes to be counted, Yildirim was leading, but Imamoglu was closing the gap with every batch of new results.

Then, at 11:15 p.m., with 98.8% of ballot boxes counted, and Yildirim leading by only 4,443 votes or 0.06%, the former prime minister appeared at AKP offices in Istanbul. He told the press he had won and thanked the city’s residents for placing their confidence in him.

It was a breathtaking move. Imamoglu went directly to the media and condemned Yildirim for announcing the result before the count had finished. Yildirim was trying to manipulate the electoral process, Imamoglu said.

The upshot was that TV screens stopped refreshing the results for Istanbul. Yildirim appeared to have tremendous influence because the Istanbul result froze for the next 12 hours.

Late Monday morning, Guven announced that Imamoglu had taken the lead with 48.8% of the vote to Yildirim’s 48.5%. The difference was just under 29,000 votes and there were 84 ballot boxes still to be counted. Guven said the delay in finishing the Istanbul count was due to the large number of objections.

He spoke as AKP workers plastered the city’s billboards with posters bearing the faces of Yildirim and Erdogan and the words “Thank you, Istanbul.”

Two days on and residents of Turkey’s largest metropolis, home to 19% of the population, still do not know definitively who is their mayor.

A cause for concern is that none of the opposition parties in parliament recognize the electoral council as being politically neutral. Imamoglu is the joint candidate of the leading opposition party, the Republican People’s Party (CHP), and its ally the Good Party (Iyi). The head of election security for Iyi, Hasan Seymen, told Al-Monitor before the elections that the electoral council “should be fair and independent, but in recent years it has been acting like a branch of the government.”

A cause for hope is the character of Imamoglu himself. Before the elections, he was a little-known but successful mayor of Beylikduzu district in Istanbul. But he won the hearts of many with his unusual style. He speaks the language of ordinary Turks, alternating between pure Turkish and Arabic words. This is contrary to the preference of CHP members for pure Turkish words, a vocabulary that is seen as elitist.

During the row over the count and recount, Imamoglu has appeared tired, sometimes disheveled, but he has never been angry or threatened. And he makes himself available to the press, giving several press conferences a day. Yildirim has given only one press conference a day.

A remark Imamoglu has made more than once to the press this week is, “I can neither be unjust to anyone nor will I allow them to treat me unjustly.”

His appeal was highlighted when he flew to Ankara on Tuesday to meet the CHP leadership. TV channels reported he would lay a wreath at Ataturk’s tomb in the afternoon.

At least 3,000 Ankaralilar, as the city’s residents are known, went to meet him. Imamoglu arrived with his wife and children and a few CHP colleagues, and quickly found himself being mobbed by the crowd.

The people wanted to touch Imamoglu or shake his hand. The soldiers on duty at Anitkabir tried to keep the people away so the wreath-laying ceremony could proceed, but they were overwhelmed.

“People found new hope in this man,” a press photographer who was at Anitkabir told Al-Monitor.

Imamoglu began the campaign by paying a call on Erdogan, during which he asked the president to vote for him. He also went to a mosque on a Friday and recited the Yasin-i Sharif prayer. As Serkan Demirtas of Hurriyet Daily News wrote, he has the “ability to reach out to all.”