Ekrem Imamoglu, the opposition candidate for mayor, says it’s impossible for his opponent to overtake him, but supporters of the ruling party’s Binali Yildirim say their man will win if the recount is expanded. 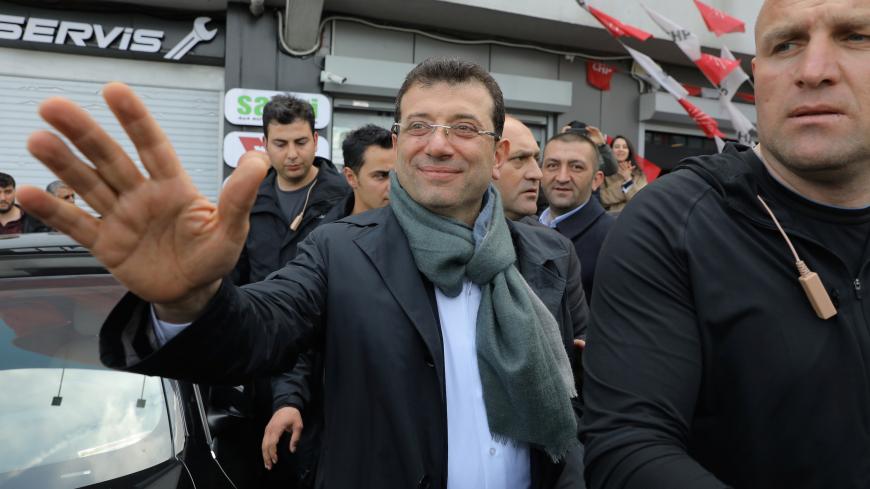 ISTANBUL — Turkey’s biggest city remained on tenterhooks on Thursday as a recount of votes in a contentious mayoral election entered its third day, with the opposition candidate arguing that his winning margin remained too wide for the ruling party's candidate to overcome.

Ekrem Imamoglu, a former district mayor who ran as a unity candidate on the Republican People’s Party (CHP) ticket, is ahead by 0.2% of the vote in Istanbul, where more than 8.5 million votes were cast, according to preliminary results, putting him on the cusp of a huge upset against the Justice and Development Party (AKP), which has controlled the municipality for 25 years.

His opponent, former Prime Minister Binali Yildirim, has said it is far too early for Imamoglu to declare himself mayor and that both sides must wait for a recount to finish.

So far, the recount of votes that were initially invalidated has been completed in 11 of the 21 Istanbul districts for which the High Election Board initially ordered partial or complete recounts. Imamoglu said the new tally had narrowed his lead slightly to 19,552 votes.

Late on Thursday, the election board ruled that all invalidated votes would be examined in all 39 Istanbul districts, a sweeping expansion of the recount. It ordered a full recount of all votes in three areas, a CHP official told reporters.

“This process should be completed as soon as possible … We just want to get on with our work as soon as possible,” Imamoglu told a news conference on Thursday. “At the end of the day, even if all of the invalidated votes are counted, the difference will remain between 18,000 and 20,000.”

But the AKP said the recount should make the opposition nervous. Already, 11,109 votes from 530 ballot boxes have been corrected to show votes for Yildirim, AKP deputy chairman Ali Ihsan Yavuz said on Thursday. But he did not say how many votes in the recount had gone to Imamoglu, nor how the recount has affected the overall tally. “You’ll see, very different results will emerge. … There are more corrections to come,” Yavuz said, adding that soon the CHP “may have cause for concern.”

The AKP’s representative on the High Election Board, Recep Ozel, said the gains Yildirim has made in the recount show he would win the mayorship if authorities grant the party's request for an expanded recount.

Sunday’s election for mayors and city councils took place against the backdrop of a recession and saw the AKP lose a string of provinces amid widespread voter discontent over President Recep Tayyip Erdogan’s handling of the economy. The party has focused its recount efforts on Istanbul and the capital Ankara, where CHP candidate Mansur Yavas holds a seemingly insurmountable lead of 4 percentage points.

Unofficial results from recounts in two eastern provinces confirmed wins by the Peoples’ Democratic Party (HDP), whose base is overwhelmingly Kurdish, after candidates from the ruling party’s alliance had disputed the outcome. The election board has so far resisted the HDP’s call for a recount in a third province where it lost by fewer than 600 votes.

Losing Istanbul is an especially painful blow for Erdogan, who was born in a tough waterfront neighborhood there before becoming its mayor in 1994, setting the stage for him to become prime minister in 2003 and president in 2014.

Erdogan has been largely absent from public view since delivering remarks that were neither a concession nor a victory speech, stirring some anxiety among the opposition about whether he would attempt to block Imamoglu. On Thursday, Imamoglu half-joked that Erdogan owed him a debt of three to five meetings — the number of times the president has met with Yildirim since the election.

In his first comments since the election, late on Wednesday Erdogan called the apparent winners in Ankara and Istanbul “lame ducks,” possibly referring to the parliamentary majority his party controls with its ultranationalist partners and his unchecked powers as president. He doesn’t face his own reelection until 2023.

“The president won’t be happy if the final count shows Ekrem Imamoglu will become mayor … but he takes consolation in the majority [his party] won in districts and councils and he is placating his base with that,” Akfi Beki, a columnist for Karar and a former press adviser to Erdogan, said in an interview.

Newspapers reported this week that Erdogan may reshuffle his Cabinet after the election setback and that he is already contemplating how to regain support in Turkey’s biggest cities, which will prove key battlegrounds in his reelection bid. Erdogan’s spokesman Ibrahim Kalin earlier this week ruled out an early general election, tweeting that the next vote will be held as scheduled in 2023.

Signs of divisions within the AKP may be emerging. A former AKP lawmaker said in a newspaper column that “traitors” within the party are partly to blame for the loss of Istanbul and Ankara, “acting as if they were with us while stabbing us in the back.”

Erdogan could seek his revenge by straitjacketing Ankara and Istanbul’s budgets. The government is said to be preparing new rules to limit the fiscal authority of municipalities that would require Erdogan’s approval to award contracts to companies, according to the opposition Sozcu newspaper. Istanbul’s 2019 budget is more than $4 billion.

For now, the CHP is enjoying what it believes is a certain win in Istanbul. Imamoglu spent part of Thursday visiting a street market where vendors and shoppers hugged and kissed the previously little known 49-year-old who has defiantly squared off against the AKP.

Imamoglu urged volunteers to protect the ballots until the recount is finalized. Volunteers from political parties are guarding votes around the clock, and observers posted images on social media of volunteers sleeping on sacks of votes throughout the night.

One CHP official manning a recount station on the Asian side of Istanbul said the process had been smooth but was taking longer than expected because AKP officials had requested that votes in all of the ballot boxes be recounted. At the facility where she is volunteering, electoral officials spent Thursday examining 426 ballot boxes, which contain about 300 votes each, she said on condition her name was not used.