The Koolulam mass singing phenomenon has swept up thousands of Israelis in an effort to bring harmony to a divided society. 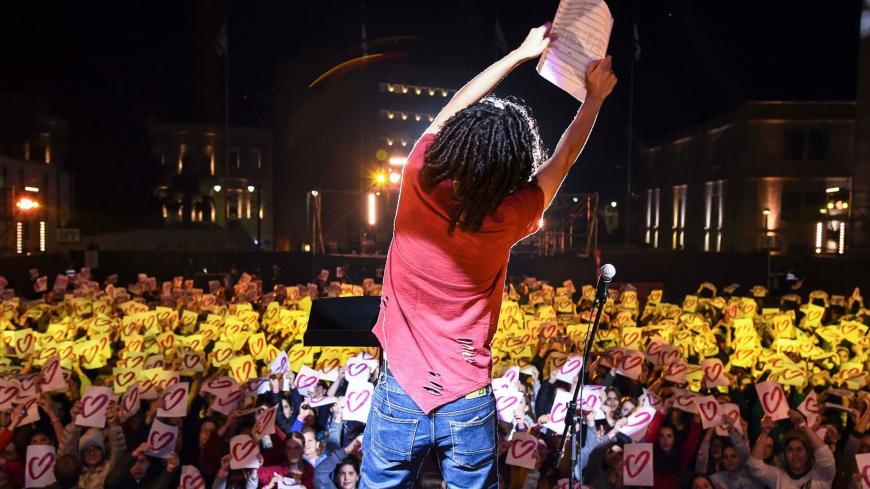 An image of a Koolulam event held in southern Israel, December 2018. - Tali Raz

The Hall of Isaac at the Tombs of the Patriarchs in Hebron, West Bank, was filled with thousands of Jewish worshippers — men and women — on April 23 in the intermediate days of Passover. Most came for a special mass singing event, where together they sang during morning prayers the verse “What will I return to the Lord,” from the book of Psalms.

Documented by drone cameras, amplified and accompanied by music, the event is part of the mass singing trend, Koolulam — which is a wordplay on "koolulu," the traditional celebratory ululation of Middle Eastern and North African Jews, and "koolam," which means "everyone" in Hebrew. The trend is taking Israel by storm and was certainly reflected in the mass singing at the Tombs of the Patriarchs.

Koolulam gathers thousands of strangers without musical backgrounds for a new arrangement of a familiar song in three-part harmony following a 45-minute lesson. But the music is actually not the main point. The event, which usually lasts about three hours, includes all sorts of social interaction exercises. The common singing and the final video clip are just the artistic product and the viral source of inspiration for other participants. The phenomenon, which started with local events with only a few hundred participants, has become over the past few months a social movement that has stirred hundreds of thousands, been viewed by millions on YouTube and drawn international attention.

In the past year, countless Koolulam events have taken place throughout the world. In early April, Canadian Prime Minister Justin Trudeau participated in one such event in Toronto that marked 70 years of friendship between Israel and Canada, where he sang ultra-Orthodox singer Matisyahu’s song “One Day” along with thousands of other people. The event that broke the record for the number of participants took place a month ago in Washington, DC, at the American Israel Public Affairs Committee's annual conference and included 18,000 participants. Last September, Asia Society gave the initiative a prize for its contribution to “changing reality.”

The initiative was founded two and a half years ago after Or Taicher, a screenwriter, director and social activist from Tel Aviv, watched a video of the priests’ blessing that takes place every Jewish holiday at the Western Wall. “I thought to myself, why not turn this crazy thing into a social change prayer,” he said in a conversation with Al-Monitor. What drove Taicher to feel an urgent need for the initiative was his personal depression over what he calls the violent social discourse in Israeli society. Along with activist Michal Shahaf-Shneiderman and musical conductor Ben Yaffet, Taicher began organizing public singing events in order to connect total strangers through music. Even they couldn’t have anticipated the result. As of today, tickets to Koolulam events are snapped up in a matter of hours.

“Music is a wonder glue that connects people, but our real goal is to create a human connection,” explained Taicher. “A Koolulam event starts with social activities that encourage getting to know one another. When you enter the hall, you get a secret mission that forces you to take some kind of courageous social initiative, whether it’s creating a social train with 10 people you don’t know or taking a selfie with a complete stranger and posting it on Facebook.” After the ice is broken, participants are separated from their parties, divided into three groups and practice singing together. The experience, it seems, entrances its participants.

“There’s a magic force to Koolulam events. Singing together makes you feel part of something huge. I really don’t want to sound mystical, but what I feel at Koolulam events is the closest thing to a religious ritual — with no connection to religion,” Shai Peretz, a businessman from Hadera, told Al-Monitor. “When you’re there, you’re overcome by love for everyone and feel powerful and calm. I see participants next to me, singing with their eyes closed like me, and we’re joyful as if God has touched us. I have personally become a better person since I’ve started to participate.”

As far as Taicher is concerned, the initiative has already proven itself. He narrated an especially moving event that took place in Jerusalem in June 2018 in which thousands of Jews, Muslims and Christians sang Bob Marley’s “One Love” together. Indonesian religious leader Pak Yahya Cholil Staquf, who leads over 90 million Sunni Muslims, came to Israel specifically to participate in the event. A week later, Indonesia — which does not have diplomatic relations with Israel — announced that it would allow visitors with Israeli passports to enter the country. Taicher hopes that Koolulam played some sort of role in this move.

The connection with the Arab world is the most fascinating challenge for Koolulam — and the biggest hope of its founders. They received a Facebook message recently from a young Sudanese Muslim man named Yassin that was especially moving. The young man said, “All my life, I only found Arabs hate Israel. But after seeing what you guys are doing — the power of music — I am really sorry for any bit of hate I had for you. Thank you for opening my eyes.”

Aside from connecting between different nations, Koolulam has organized events to connect different populations in Israel. Thus, for instance, in an event in Haifa in February 2018 — with the goal of uniting Jews, Christians and Muslims — thousands sang Matisyahu’s “One Day.” At an event meant to spread the message of accepting others and those who are different, 8,000 participants gathered — half of them were people with disabilities. Since the founders seek to create deep social change, Koolulam works in schools, preschools and prisons, among many other social settings.

Taicher believes the secret to Koolulam’s success is the human yearning for connection. “People want to do good, to connect and to love. In the media, everything is violent and aggressive; separation is intensified and divisions are emphasized. But that’s not a natural situation. We are proof that people do want to connect. They only need an opportunity,” he said, adding, “It’s the reason that we put much effort into our video clips. We hope that when [people] log onto their feeds and move from insults to fake news, they will also see something that connects them to other people and doesn’t distance them.”

Koolulam has managed to keep itself out of the political cauldron. “There are so many social issues that need to be met and bridged. For us, it doesn’t matter if you’re on the right or left, secular or religious, Jew or Arab. Koolulam works to remove suspicions and walls and create fraternity. The moment you realize that a person stands before you, that you need to respect him and his opinion, everything else works out. We’re convinced that what connects is greater than what divides,” Taicher concluded.