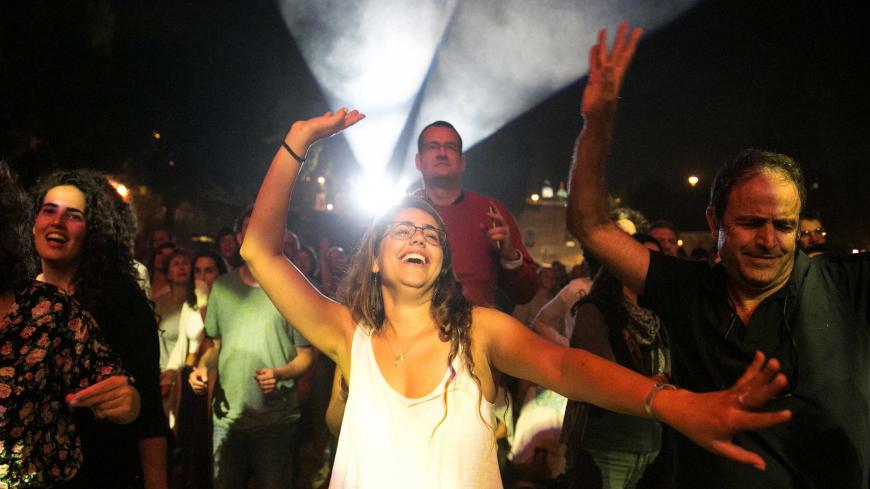 Residents of Jerusalem dance at a concert of international electronic artists from not just Jerusalem but also Ramallah, Jericho, Hebron and Shuafat at the concert "Kulna" during Season of Culture, Jerusalem, Sept. 7, 2017 - Michal Fattal

Jerusalem, Israel’s contested capital, is a city in conflict. Its crowded neighborhoods jut up against fault lines both political and personal. Its tribes — Jewish and Muslim, secular, extremist and all the colors in between — rub shoulders uncomfortably on the city’s buses and trains, but mostly stick to the corners of the city they have claimed for their own.

But Karen Brunwasser wants you to look closer. The Jerusalem she knows and loves, she says, is a place filled with diverse, boundary-defying people. As the deputy director of the Jerusalem Season of Culture, Brunwasser spearheads an annual summer festival of music, dance and performance art that has been calling citizens out of the woodwork since 2010. This year, after a monthlong calendar that included artistic installations across city rooftops; an all-night dance party that combined Jewish soul music with Arabic liturgy; and a live art performance that doubled as a sociology experiment, she is confident that others are beginning to recognize the change in Jerusalem as well.

“Jerusalem is a place where people have all sorts of preconceived notions about what it is and what its problems are, but when you come and encounter the place you realize the city is filled with human beings who can’t be boxed in, and they challenge your preconceptions,” she told Al-Monitor. “The festival is all about taking that and putting it on stage.”

Brunwasser, a native of Philadelphia, Penn., has lived in Jerusalem for 12 years. In 2010, while working with the Charles and Lynn Schusterman Family Foundation, one of the world’s largest and most influential Jewish charities, she helped dream up the Jerusalem Season of Culture as an organization that would electrify the age-old city with modern creative energy.

Last year, the Jerusalem Season of Culture launched Mekudeshet, a citywide arts festival that attempts to straddle both East and West Jerusalem and unite the many factions of the city — Palestinian and Israeli, and those of every shade of religious devotion — under the welcoming umbrella of arts and expression.

The festival, which launched Aug. 23 and closes Sept. 15, brought thousands of Jerusalemites from across the spectrum together to take in a broad range of events, each expressing an entirely different type of art. “Night Stroll” offered intimate music and reflection among the hushed alleys of the Tower of David, but only in the wee hours between midnight and sunrise. “Found,” which demanded audience participation, breathed new life into a communal lost-and-found practice, based on the ancient Jewish ritual of the claiming stone. And “Above and Beyond,” a bird's-eye tour of Jerusalem across the city’s rooftops, took the standard Jerusalem city tour and raised it several stories, forcing a shift in perspective.

“There’s something about going on a roof … even if it’s in a place that you’re familiar with,” Brunwasser said. “There’s this moment of disorientation, that moment where your assumptions are challenges, and this is a moment that we think artistically is very important.”

The event’s ecstatic peak occurred Sept. 7 with “Kulna,” which brought together international electronic artists from not just Jerusalem but also Ramallah, Jericho, Hebron and Shuafat, for a celebration of all flavors of Middle Eastern music, held in the open air on the seamline of East and West Jerusalem.

Mekudeshet wraps up on Sept. 15, but Brunwasser believes that with each passing season, the stereotype of a divided, frozen Jerusalem is chipping further away.

“There are all sorts of rules about life in this city, about what you’re supposed to do and what you’re not supposed to do,” she said. “But what’s happening more and more is people are saying: Screw it. Enough. We’re living in a real place with real people, and that’s what we want to focus on.”