Though the pushback from some ultra-Orthodox politicians and others is still harsh, the leaders of the Israel movement for Reform and progressive Judaism feel that more Israelis are opening up to them and supporting their vision of Judaism and solidarity. 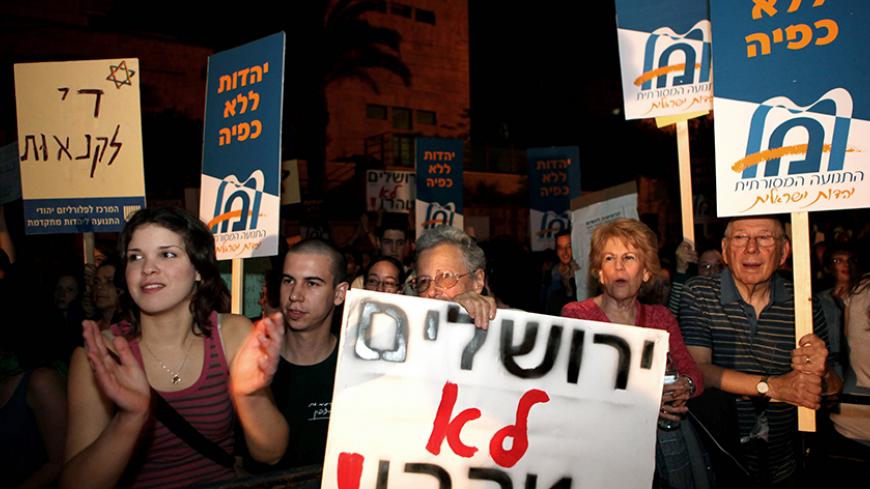 Hundreds of secular Israelis and Reform Jews demonstrate in Jerusalem against what they call ultra-Orthodox Jewish religious oppression in regard to gender-segregated buses in certain conservative areas of Jerusalem, March 13, 2010.

On the eve of Rosh Hashanah, members of the Or Hadash congregation in Haifa gathered for a festive prayer service. In contrast to Orthodox synagogues, where there is total separation between men and women, the 60 families in this community all sit together. This unity is one of the most plainly evident differences between Reform and Orthodox synagogues in Israel. Another difference lies in religious leadership. Prayer at Or Hadash is led by Rabbi Oshrat Morag, a woman (something unheard of among the Orthodox); the evening included her sermon and explanation of the service in which all members participated.

“I hear from people that at synagogue services they don’t know why everything is done, when you stand and when you sit. We explain it to them. We want them to feel at home from a religious and communal standpoint,” Morag told Al-Monitor.

The word “community” is characteristic of the discourse of Reform Judaism. Its people use it to describe their attempt to form groups of members that are engaged, inclusive and active in Jewish culture and tradition.

Morag has had first-hand experience of the tension in Israel between Orthodox and liberal Judaism. “When people ask me what I do for work, I no longer tell them. In my experience it leads to fights and arguments. When I responded honestly and said I was a Reform rabbi, some people have said, 'Hmm, interesting,' but more than a few have said 'You’re heretics' or 'You’re a woman and you’re not allowed to touch the Torah scroll' or similar statements. I felt that it stems from some kind of brainwashing and unfamiliarity with Reform Judaism.”

Although the Reform community in Israel is growing and flourishing, these reactions are far from dwindling. Just the opposite. Perhaps because of the public's increased exposure to progressive Judaism, some responses have become quite harsh. For instance, only recently the Religious Services Minister David Azoulay of the ultra-Orthodox Shas Party, said, “I cannot allow myself to say that [a Reform Jew] is Jewish.” His July 7 words caused such an uproar, mostly among the large Reform community in the United States, that Prime Minister Benjamin Netanyahu publicly renounced the statement.

Neither could the Israeli Reform community move on from that statement. “This is a continued campaign of incitement on the part of the rabbinic establishment and the religious parties,” Rabbi Gilad Kariv, the executive director of the Israel Movement for Reform and Progressive Judaism, told Al-Monitor. “I felt anger and revulsion. We are sick of our representatives, whose salaries are paid by our taxes, feeling free to speak in this way.”

In Haifa, with the help of the Haifa-Boston Connection — an initiative for joint activities by the communities of the two cities — the community members held a happening for Tu Be-Av (the Jewish Valentine’s Day, which falls in August) for all streams of Judaism to show that “Everyone is Jewish and there are no divisions among us,” said Morag. “Secular, Orthodox, conservative and Reform representatives participated, and taught the same texts in joint learning circles. We celebrated the holiday of love among ourselves as a direct response to the words of the minister of religious services.”

Azoulay's statement regarding Reform Jews isn’t exceptional in the political landscape. The day after he spoke out, the chairman of the Knesset Finance Committee, Moshe Gafni of ultra-Orthodox Yahadut HaTorah, said that while the Reform Jews are Jews, they “stab the Torah in the back.” Veteran members of the Reform movement remember that former Israeli President Moshe Katzav once adamantly refused to utter the title “rabbi” when a senior representative visited the presidential residence during a 2006 trip to Israel.

“These people betray Judaism,” bristled Zvia Walden, daughter of former Israeli President Shimon Peres and a longtime member of the progressive Beit Daniel congregation in Tel-Aviv. Quoting a line from Habakkuk 2:4 often employed to express tolerance, she told Al-Monitor, “It says, ‘The righteous shall live by his faith.’ Judaism is not a religion that stops but one that progresses. There’s no one Judaism, and therefore not one spirit. For some people Judaism is only Jewish law, and it’s their right to believe so, but they shouldn’t exclude me.”

Reform Judaism has no threatening elements — except for those who find its inclusion nature threatening — and it has been flourishing even in traditionally secular strongholds. Thus, for instance, at Kibbutz Beit Hashita in the Harod Valley, a non-Orthodox congregation was established with the participation of the Reform movement through the initiative of Yaakov Yunish, formerly the kibbutz secretary and secretary-general of the kibbutz movement.

“I’m not certain whether I believe,” he told Al-Monitor. “I’m a spiritual person who loves the land of Israel. My connection to the movement comes from a connection to Jewish culture and tradition and love of Bible stories.”

With the move to expand kibbutzim and allow nonmembers to live there in adjunct neighborhoods, Yunish felt the need to strengthen the balance between the individual and “togetherness” and to find ways to connect veteran and new residents. “We passed the establishment of the congregation as a decision of the kibbutz directorate. A hundred members signed on, and together with our rabbi, Tlalit Shavit, we’re creating joint content. Our activities take place in the common space of the kibbutz, and out of 1,000 kibbutz members, about 100 have become involved in the congregation.”

There has also been opposition to the Reform movement on the kibbutz. When Yunish turned to a neighboring community in an attempt to expand the congregation, there were “serious tensions." He said, "There were some who wanted to join, but there were some who were really opposed to it and angry that we’re bringing on a female rabbi. So we gave up. We didn’t want to start a war over it.”

Despite the negative reactions, members of the Reform movement are pleased at the growth and exposure of the movement in Israel. According to Kariv, about 50 Reform synagogues and congregations are active in Israel — double the number from seven years ago. “Every year new congregations get started here. We have a network of educational institutions — 60 preschools and eight elementary schools affiliated with the movement.”

A survey conducted by the Knesset Channel following the statement of the minister of religious services found that 12% of Israelis define themselves as Reform or Conservative. According to Kariv, “Reform Jews in Israel are progressive and liberal people with a clear democratic identity and with a connection to Jewish culture and tradition. We are experiencing significant growth in activity. Every third Israeli has participated in an event led by a Reform rabbi. Maybe we’re not the most significant stream of Judaism in Israel, but we are certainly not a marginal phenomenon.”