A rare group of Israeli and Palestinian teenagers brings a mixture of musical styles and political grievances to a 3-year-old choir that is just completing its first tour in the United States. 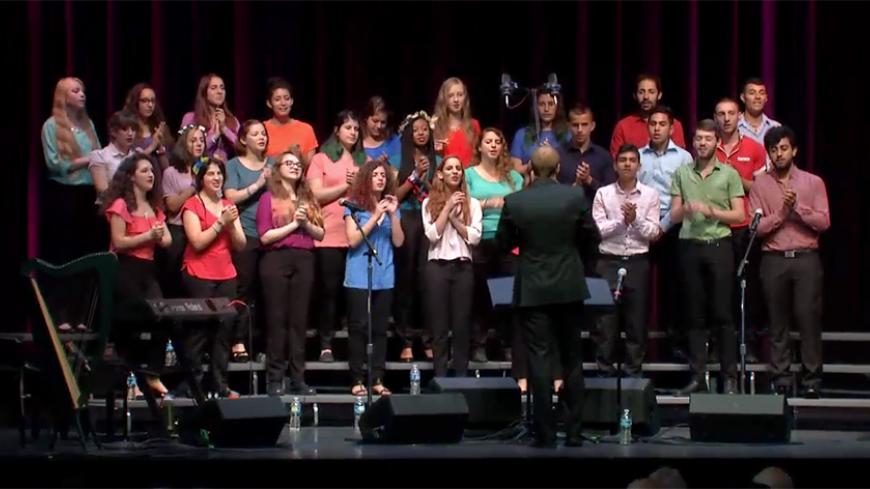 The YMCA Jerusalem Youth Chorus performs at the John F. Kennedy Center for Performing Arts in Washington, June 26, 2015. The group empowers young Palestinian and Israeli singers from East and West Jerusalem to grow together in song and dialogue and become leaders for peace within their communities. - kennedy-center.org

At a time when both Israeli and Palestinian society is becoming ever more polarized, an interfaith, inter-ethnic chorus is creating a safe space for young people to confront their differences while melding musical traditions into a unique multicultural sound.

The 3-year-old chorus, the brainchild of a trilingual Yale University graduate and musician named Micah Hendler, deals with the Israeli-Palestinian conflict not only through music but through a dialogue process that augments the experience of singing together. These dialogues, chorus members say, are difficult but enable them to air opinions and complaints on subjects ranging from mundane issues such as who sang off key at the last performance or got an extra solo to existential ones about their fundamental rights in a war-torn place.

“Dialogue is dangerous,” Hendler told Al-Monitor in an interview at a Bethesda, Md. synagogue where the choir performed before an interfaith audience June 27. “It’s not like people sit and listen politely to one another tell them that everything they’ve ever learned is wrong.”

He added, “There’s always friction over everything. The default mode of Israelis and Palestinians is to be a victim. … If I tell someone they need to do something they don’t want to do, they say I am discriminating against them.”

The choir has 28 members, roughly divided between Israelis and Palestinians, who are themselves subdivided between Christians and Muslims. Ranging in age from 14-19, the singers bring adolescent angst as well as cultural, religious and political differences to the table.

Some are natural peacemakers.

Nasreen Janah, 14, from the Beit Safafa neighborhood of East Jerusalem, told Al-Monitor that her aunts teach preschool at the Jerusalem YMCA, which has given the choir its home base. She once attended a school with Israeli children, she said, and is enjoying the chance to speak Hebrew again. “In the dialogue, it’s pretty challenging when they start talking about politics. I’m in the middle,” she said.

Hili Salz, 16, from West Jerusalem, considers herself fairly liberal but has had trouble hearing Arab choir members praise the militant Palestinian group Hamas. “I didn’t expect that some people would keep their opinions,” she said. “[The Arabs] say Hamas is OK and that it was elected, while for me they [Hamas] are terrorists.”

Still, she says she has begun to understand the Arabs' point of view through discussions about the "Nakba," or catastrophe — the word Palestinians use for the creation of the state of Israel in 1948 and the dislocation of thousands of Arabs from their homes. “Everybody fights for their own place,” Salz said.

Many choir members came to the United States — where they performed in New Haven, Conn., New York City and Boston in addition to Washington and Philadelphia — with preconceptions about America and Americans.

Rebecca Vorobeitchek, 14, who is of Russian origin but whose mother is now married to a Palestinian Muslim, told Al-Monitor, “I never loved America” because of its support for Israel. Her time in the United States has modified her views, she said. “When I came, I saw very beautiful places and good people.”

Mohamed Abu Snena, 17, from the Old City of Jerusalem, said he liked Washington best of the US cities they had visited but is not enamored of the policies concocted here. “Don’t give weapons to Israel,” was his response when asked what advice he would give the Barack Obama administration to revive efforts to broker Israeli-Palestinian peace.

Michal Levin, who supervises the dialogue program for the choir, told Al-Monitor that the experience is unique because most such efforts involve only one short-term project. In this case, some of the youngsters have sung together for three years. “They learn that they can quarrel between 5 and 7 [p.m.] and between 7 and 9, they can sing together,” she said.

The dialogues, Levin explained, focus on universal values such as equality and justice and majority and minority rights. In the United States, she said, she used the example of the US Senate, where each state, no matter how small, gets two representatives. So if two people are fasting for Ramadan or three people are keeping kosher, the other choir members have to accommodate them, Levin said. “When they come to deal with conflict, they don’t come just spilling out their opinions. Now they have to think and see what are the consequences of their opinions vis-à-vis the people they are sitting in the room with.”

Hendler said he got the idea for the choir while studying music and international relations at Yale and by building on his experiences as a participant and counselor for Seeds of Peace. That organization was founded by the late American journalist John Wallach in the wake of the 1993 Oslo Accord to bring Israeli and Palestinian youths — and later young people from other conflict zones — to a summer camp in Maine to try to create lasting personal connections between them.

The Jerusalem Youth Chorus “is a fusion of all the things that have fascinated me … or I felt I could have the greatest impact upon,” said Hendler, who is only 25.

A singer since early childhood, Hendler organized and led an a cappella group at his synagogue while still in high school and went on to sing with the renowned Whiffenpoofs at Yale. In his senior year, he got the CEO of the Jerusalem YMCA, Forsan Hussein, to agree to host the youth choir after a Skype conversation in which Hussein tested Hendler’s ability to speak Hebrew and Arabic. Other funding has come from alumni of the Whiffenpoofs, the Yale Alumni Chorus Foundation and individual donors, Hendler said.

Upon arriving in Jerusalem in 2012, Hendler went from high school to high school on both sides of the Green Line to recruit singers. He said he anticipated that only a handful would show up to audition and was elated when 80 did. He convinced skeptical parents that their children would benefit on an educational, artistic and linguistic level as well as get the opportunity to tour abroad, which the choir has now done three times — to London and Japan as well as the United States.

Most of the Israeli members are girls, while most of the Palestinians are boys, Hendler said, a reflection of the fact that Israeli men tend not to think of singing as macho, while Arab men have a tradition of sung, improvised poetry called "mawwal." In their performances, the choir, which sings in English, Hebrew and Arabic, tries to meld these traditions “to create a musical common ground that incorporates elements of both styles of singing so that everyone feels part of themselves in the music we sing,” he said. He has helped Arab boys learn Western-style harmony, he said, and his goal for next year is to teach everyone to sing Arabic quartertones.

In Israel, the group has performed and recorded with singer-songwriter and peace activist David Broza and with Palestinian-Israeli artist Mira Awad. They have also sung with visiting groups and at a model United Nations conference in Herzilya that brought together 500 Israelis, Palestinians and Egyptians.

“I taught them the song, ‘We are the ones we’ve been waiting for,’” Hendler said, describing one of their standards. Another is “Home,” which they recorded with YouTube phenom Sam Tsui.

The chorus often ends its concerts with a piece that the singers wrote together. Encapsulating both their idealism and the difficulty of their mission, it includes this refrain: “Our love is not easy, but we can change the world if you would hold my hand.”