Top Iranian officials have been traveling to Iraq to woo tribal leaders and build influence there. 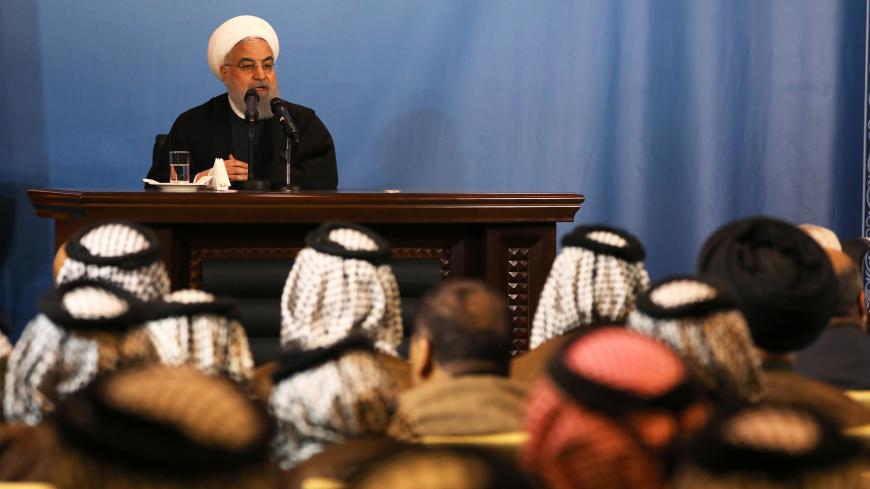 Tehran has been able to capitalize on sectarian ties with some Iraqi parties and armed groups with an eye toward gaining an advantage over the United States and perhaps even Iran's archrival Saudi Arabia, which has been drawing closer to Baghdad in the past two years. Now Iran is working to build relationships with Iraq's tribal leaders in an attempt to gain influence and ensure a greater footing in the country.

Iran's and Iraq's central governments are largely run by Shiite Muslims, while Saudi Arabia's government is run by Sunnis.

Iran is taking swift steps to prevent others from beating it to the support of Iraqi tribes, mostly Shiite ones.

Raed al-Freiji, a tribal sheikh from Shiite-dominated Basra, told Al-Monitor, “Iran is trying to send a message to the US that it has managed to win over the sheikhs of Iraq and that it wants to wage war with the US in Iraq." He said government-affiliated Iraqi political parties "are implementing this agenda on [Iran's] behalf.”

Former Ninevah province Gov. Atheel al-Nujaifi, a Sunni, said in statements published March 27 on the official website of his political party, Mutahidoun Coalition, “Iran is trying to quarrel with the US by cementing its relations with the sheikhs of Iraqi tribes. For that reason, tribes are meeting and communicating with Iranian officials.”

On March 12, Iranian President Hassan Rouhani gave a speech and met in Baghdad with many community leaders, including sheikhs, most of whom were Shiite. Dozens of the attendees appeared with him in a photo from the occasion, but the event wasn't coordinated with the Iraqi government.

An Iraqi Foreign Ministry source told Al-Monitor on condition of anonymity, “We didn't coordinate with Iranians for Rouhani’s visit to include meeting with tribal sheikhs. We don't know who handled the coordination. Several sheikhs contacted us, and they said Iraqi President Barham Salih invited them. But we denied these allegations.”

The source added, “Our suggestion involved a Rouhani visit to the Faculty of Political Sciences at Baghdad University to give a lecture, since it is an academic institution [devoted to the study of politics]. But the meeting took place later with tribal sheikhs instead.”

During Rouhani’s visit that same day to Karbala, he met with a group of Shiite tribal sheikhs and talked about economic relations, fighting terrorism and promoting communication between Iraq and Iran.

Falah al-Meshaal, former editor-in-chief of Sabah, Iraq's official newspaper, told Al-Monitor, “I think Iran realizes, through repeated [Iraqi] protests and the slogan 'Out with Iran!' that it is not welcome publicly, notably in central and south Iraq, [even though those areas] are considered Shiite.”

He added, “Iran made its gains through the loyalty of affiliated Iraqi militias. ... But [the people's] political memory won't help Iraqi tribal leaders who had pledged absolute allegiance to Saddam Hussein [after the US invaded Iraq in 2003] but ultimately abandoned him." This indicates that the same tribal leaders now offering their loyalty to Iran had done the same with Saddam, and that their loyalty may not be trustworthy.

In September, Iranian Ambassador to Iraq Iraj Masjedi met in Baghdad with 50 sheikhs from Basra and Wasit at the Iranian Embassy, Mulla said. Afterward, the official Iranian news agency Irna reported the sheikhs "from Basra, Kut and other Iraqi regions announced their solidarity with Iran and asserted their readiness to sacrifice their money and lives to defend Iran.”

It may be that through the visits of Zarif and Rouhani, Iran is seeking to form a new image in the minds of Iraqi citizens that shows that Iran's Reformist government — as opposed to the hard-line Islamic Revolutionary Guard Corps and the leader of the corps' Quds Force, Maj. Gen. Qasem Soleimani — is establishing direct ties with the people rather than through armed groups.

Freiji, the Shiite tribal sheikh from Basra, criticized the meetings with Iranian officials, telling Al-Monitor, “Some sheikhs only think about their own interests.”

He added, “Officials and leaders of states who visit Iraq have to meet with government officials. If they want to meet with community leaders, too, they must coordinate with the government. But, unfortunately, the meetings with Iranian officials did not undergo governmental coordination.”

Iran is well aware that the tribal base in Iraq plays a huge role in the elections and support for politicians, and it realizes that tribes, especially those in the south, have more power than the rule of law in some regions. Winning them over has become a necessity for Tehran.

Iran is influential in the Iraqi political process and wants to expand its social power. Rather than relying on its influence through affiliated armed groups in the future, it might instead be trying a soft-power approach — which would explain its outreach to tribal leaders.