The Iraqi state faces serious obstacles in its efforts to confiscate weapons from the heavily armed populace, which is much more concerned with tribal ties and customs than the rule of law. 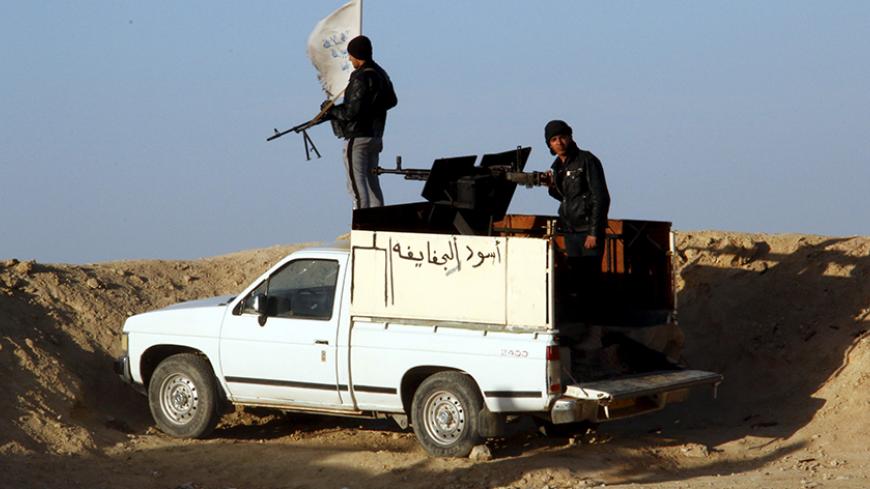 BAGHDAD — Videos posted to YouTube of fighting in the city of Basra by proud young men look like scenes from an American action movie. The fighters are seen firing into the sky as they warn each other of shots coming from opposing forces.

Iraq is bursting at the seams with weapons, and tribesmen are both users and fodder. The same situation prevailed under Ottoman rule and in the early days of the monarchy. The Iraqi state curbed the tribes' influence, which experienced a strong resurgence in the years that followed the US invasion of Iraq in 2003. When the state collapsed, security forces grew weaker and the new authorities were unable to restrict the use of arms, and the tribes grew to become forces to be reckoned with.

During the inaugural conference of the Council of Tribes and Social Components of Basra Province held in Basra on Jan. 12, Iraqi Prime Minister Haider al-Abadi stated, “There can be no development, services or prosperity in Basra and other governorates if security is lost.” His statement was a response to the tribal disputes that had spread throughout Basra and other governorates, such as Dhi Qar and Baghdad.

Abadi addressed tribal elders who gathered around him at the conference, saying, “Tribal fighting is unacceptable, and a small minority must not be allowed to destroy the social fabric of Basra. Basra’s security is tightly linked to the security of all of Iraq. Unfortunately, as we triumphed over the Islamic State’s terrorist gangs, some have instigated disputes and conflicts that have led to security breaches.”

He added, “A strike force has been dispatched from Baghdad to impose security, restore the state’s authority and bring about social peace.”

For two years now, not a month passes without heavy tribal fighting in Basra, resulting in the deaths of both fighters and civilians that are not involved in the conflict. Basra is located in the far south of Iraq and is home to major tribes such as the Garamshe, al-Halaf and Bani Malik. These tribes possess light and medium weapons and in the absence of law enforcement, fighting among them has skyrocketed.

Al-Monitor contacted Abadi’s spokesperson Saad al-Hadithi and asked him about the appropriate mechanism to put an end to tribal fighting. Hadithi replied, “In the pursuit of general security, Abadi decided to confiscate medium and heavy weapons from the tribes, without any exceptions.” He added, “The implementation mechanism includes the disarmament and arrest of dispute instigators.”

Abadi is not the only one interested in quelling tribal disputes and the disarmament of Iraqi tribes. During a meeting with tribal elders Feb. 7 in Baghdad, Iraqi President Fuad Masum stressed “the importance of removing medium and heavy weapons and restricting the use of arms to the state in order to allow it to protect society, bolster the state’s authority and spread the rule of law.”

Nevertheless, the disarmament process faces many obstacles, most importantly “the state’s powerlessness,” said Sheikh Mohammed al-Danbous, the secretary-general of the Iraqi Tribes Movement in Basra.

He added, “Many parties taking part in the state possess weapons beyond the purview of security agencies, which has contributed to the deterioration and fragility of the security situation.”

Danbous, however, indicated, “There are parties and tribes that refused to allow their weapons to be taken away and security to be restored.”

For his part, Iskandar Watout, a member of the parliamentary Security and Defense Committee, told Al-Monitor, “Disarming the tribes is extremely difficult, as weapons are extremely prevalent among them. Most tribes are currently fighting against IS alongside the Popular Mobilization Units and security forces.” He added, “All tribesmen have weapons at home.”

Al-Monitor spoke to a police officer who has conducted three raids looking for weapons in Basra governorate. He said, “Dealing with the tribes is extremely difficult, for they are very conservative by nature and their permission is required before searching their houses.”

The officer, who spoke on condition of anonymity as he was not authorized to talk to the media, added, “Tribes usually ask us not to enter their houses unless their women cover their heads and withdraw to a particular room.”

He explained, “Security forces may be forced to wait for half an hour sometimes, until they are given permission to enter and search the house. The room where women are cloistered is off limits to security forces, and that is where weapons are usually stored.” He added, “Requesting a search of said room might lead to problems with the tribe with which the house owner is affiliated.”

Most Iraqis hail from one tribe or another. Even many of those who have forsaken their tribes to reside in cities or hold private sector jobs have now reverted to abiding by tribal norms. Tribes do not recognize the rule of law and are somewhat more permissive of killing, resolving murder cases with blood money.

Many state officials resolve political disputes through tribal methods, such as politicians in the Shiite National Alliance. Alliance members Baligh Abu Kalal and Hanan al-Fatlawi resolved a dispute between themselves in May 2015 through mediation via their respective tribes, exemplifying the difficulty the government faces in curbing tribal influence.